Between a Saudi student's profiling and irresponsible CNN and NY Post reports, our nation's bigotry is on display 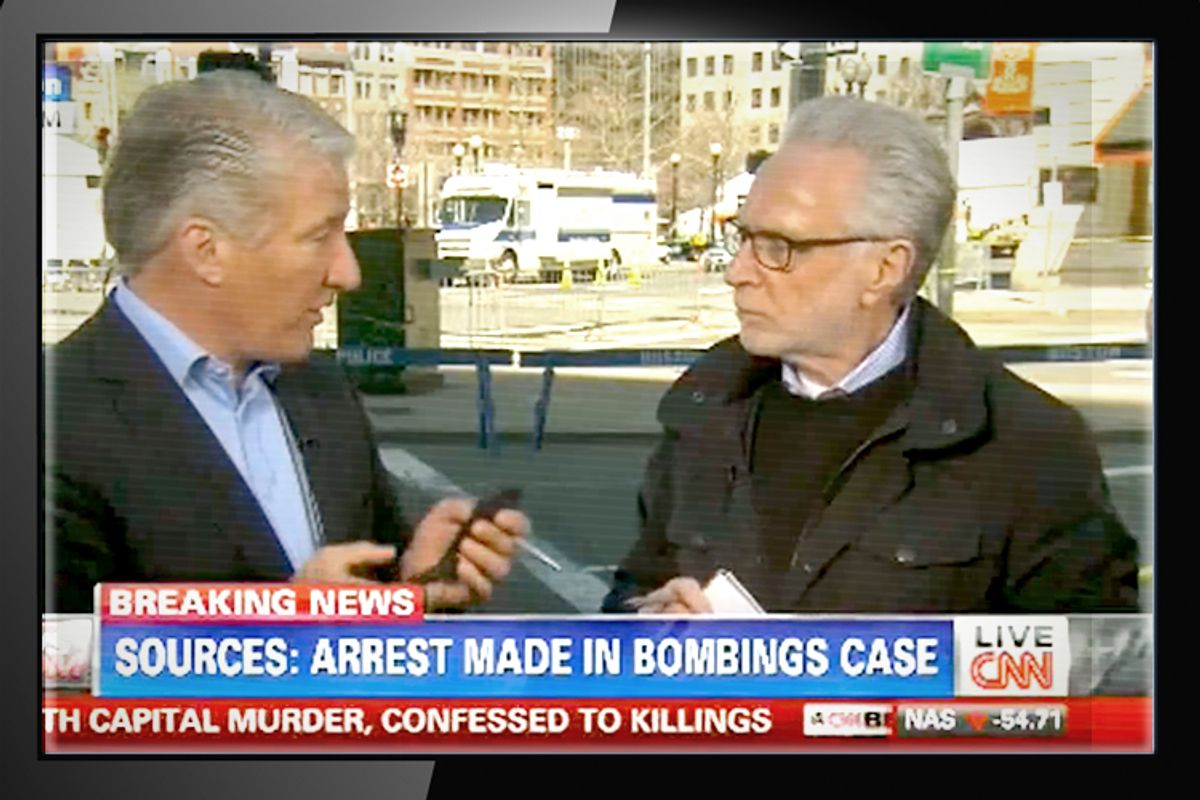 For a country that so often purports to be color blind, that insists too many people of color are overly obsessed with race, and that claims to live up to Dr. King's dream of not judging people "by the color of their skin but by the content of their character," the last two days have revealed a much uglier reality. They have revealed that -- "doth protest too much" claims to the contrary -- America is anything but color blind, that too many white folk are the ones obsessed with race, and that Dr. King's dream is still just that: a distant dream. And that's not just a general truism that is irrelevant to this moment of national emergency -- it is, on the contrary, a very specific point that must be made, right now, precisely because of that national emergency.

Three seemingly separate events tell this story in all its hideous detail. First came the blatant ethnic/religious profiling of an Arab student injured at the Boston Marathon bombing. In that deplorable episode, he was immediately targeted as a suspect because -- like thousands of others -- he was running away from the blast, but unlike those others, he happened also to be Saudi. In that case, "probable cause" seemed to be a reflexive judgement exclusively about the color of his skin, not the content of his character -- and, as with the Oklahoma City bombing before it, that inaccurate and unsubstantiated judgment was then unceremoniously blared all over the world, quickly becoming fodder for the Islamophobic hate-o-sphere and fueling conservative pundits' fact-free speculation.

Then came CNN’s declaration that police had arrested a “dark-skinned male” — again, unquestioningly blared all over the world, drowning out a CBS News report alleging that the “man sought as a possible suspect is a white male, wearing white baseball cap on backwards, a gray hoodie and a black jacket.”

And then this morning came the New York Post's front cover purporting to show two dark-skinned men that the newspaper claimed police had identified as suspects. As Gawker shows, the Post opted to ignore previous reporting debunking that photo and eagerly published it on its front-page.

Taken together, this is much more than just the journalistic sloppiness of the 2000 Election Night now playing out in the coverage of a horrific terrorist attack. It is a rare spotlight on the prejudiced suppositions baked into our worldview, a commentary on what too much of America wants, and an illustration of the kind of bigotry that people of color in America unfortunately must live with on a daily basis.

I said yesterday I hoped (though certainly never assumed) the Boston bomber ends up being a white non-Muslim American because in a country where white people are never collectively profiled, surveilled or targeted by law enforcement, that would best guarantee a measured -- rather than a hysterical, civil-liberties-trampling -- reaction to the atrocity. For this, I was lambasted by everyone from Rush Limbaugh to Bill O'Reilly to their thousands of followers for being "race obsessed" (O'Reilly, in fact, took a step into straight-up slander by subsequently claiming that I am hoping Americans kill other Americans in terrorist attacks).

But in how so many gleefully emailed, Tweeted and Facebooked the initial reports of the Saudi student, then the CNN "dark skinned male" report and then the New York Post cover as supposed proof of a non-white/foreign plot, we see that those who are race obsessed are those white people who are hoping -- and, even more tellingly, are assuming -- that evildoers simply must be people of color, and therefore must be part of a larger conspiracy rather than mere "lone wolves" (a.k.a. the term used primarily for white American terrorists).

The point here, of course, is not about who the assailant ends up being. With FBI, Department of Homeland Security and West Point data showing a rising threat of right-wing domestic terrorism, it may end up being a non-Muslim American (and according to a new Fox News poll, the majority of Americans wouldn't be surprised if that were the case because most Americans now see the domestic terrorism as a bigger threat to the homeland than international terrorism).

Then again, with the ongoing threat of international terrorism, it may end up being an Islamic terrorist. Or it may be some wholly new threat. Regardless of who the perpetrator is or even whether some fact-free speculation ends up being true, it doesn't excuse or exonerate the police profiling or the fact-free "reporting" that we've seen. Likewise, whether any fact-free speculation about Muslim terrorism ends up being true, it doesn't excuse the troubling fact that too many simply assume that it must be true and that the "other" -- a.k.a. the non-white, the foreign or the Muslim -- should therefore be perpetually subjected to exactly the same kind of treatment to which that Saudi student was subjected.

The standard retort by the "I'm colorblind!" crowd to any mention of these inconvenient facts, of course, is to claim that "now is not the time" to discuss bigotry. But that's the thing: its only "not the time" if you happen to be a member of the group (read: white people) that is never collectively demonized. For people of color, whether in Boston or anywhere else, now must be the time, because -- unlike white folk -- at a moment's notice people of color personally could end up like the Saudi student or the guys on the front cover of the New York Post. And just as bad, their entire communities could easily end up with more draconian measures unduly aimed at them.

This, by the way, is not news to any person of color in America. From racial profiling to a two-tiered justice system to differing employment/workplace standards, non-whites have for decades been subjected to different -- and more harsh -- standards than white people of similar income, background and status. As evidenced by the Saudi report, the CNN debacle and the New York Post slander, emergencies like a terrorist attack simply intensify -- and expose -- the problems that come with the institutional double standards.

Indeed, those episodes remind us that the most powerful form of privilege is to be part of a group that is permitted to at once obsess over the "other's" demographic profile, while also pretending to be offended that anyone might mention that bigotry is everywhere -- and is especially powerful at times of national emergency.