How many pets can we save?

When we found out a dog was being abused, my wife and I went into rescue mode. Was it really our job to save him? 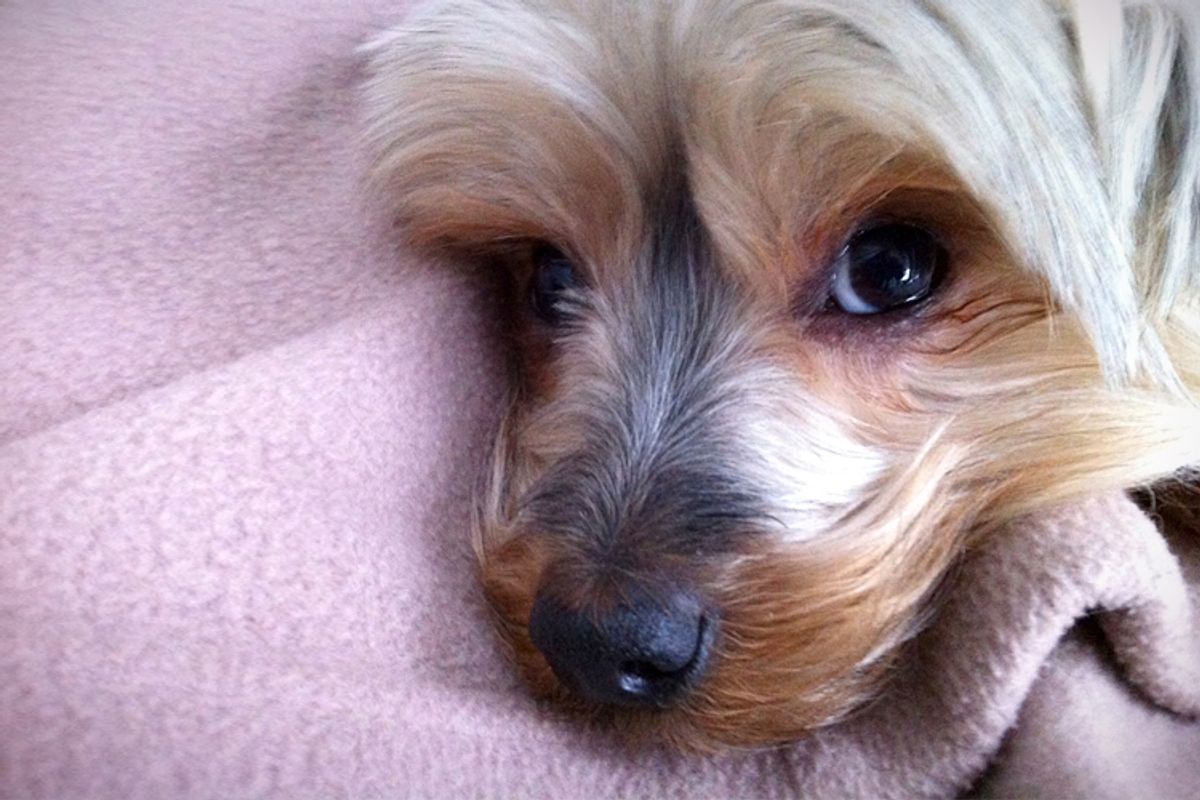 A photo of the author's dog, Stella
--

My wife is a veterinarian, and we have a household of eight pets, which is more than I would’ve thought a sane young couple could have. We’re newly married and don’t yet have children, and like a lot of people we treat our pets as our kids. Currently we have three dogs, two cats and three heritage-breed chickens. Some friends call this our menagerie, the less kind ones our circus. We prefer to call it our pack. It’s a life with a lot of noise and no small amount of dander.

It began when I took my dog to the veterinary clinic where my wife works. At the time she was still in vet school and I was a first-time pet owner who’d chosen to spend most of my adult life responsible solely for my own fun and convenience. Archie, my dog, represented my first, hesitant step toward maturity. “He has a tick and I don’t know how to remove it,” I said to my future wife. Thankfully she pitied me, removed the tick, and thought I was cute enough to date. Three years later we got married with our dogs among the witnesses.

In daily life, my wife and I sometimes bicker about responsibilities and our pets’ eccentricities. Why don’t you take the dogs out tonight, I’ve done it the last three nights. Tomorrow morning I want to sleep in — it’s time for you to get up at 6 a.m. to feed the animals and let them out. If the cats are so smart, how come they can’t be trained? Such is the life of modern-day pet owners, I suppose.

But right now we’re confronted with an actual dilemma. A few weeks ago my wife spoke with another local veterinarian who described a troubling appointment. The clients had been a widow and her adolescent son whose young adult Yorkshire terrier was so aggressive she had to be restrained during the basic exam. The back story to the case was that the widow’s deceased husband had given the dog to their son. What’s more, the widow said her son abuses the dog. He has thrown her — she weighs eight pounds — against walls and down steps. In one incident the boy injured her leg, possibly breaking it.

Have I mentioned yet that one of my and my wife’s three dogs is a Yorkshire terrier? Her name is Stella, and my wife likes to say that Stella is “perfect.”

About a week later, on an idle Saturday, my wife received a text message from our pet sitter, who is affiliated with an animal shelter. The text contained an image of a Yorkie named Pancakes sleeping on a sofa wearing a sweater with a bumblebee pattern.

Pet sitter: I’m fostering a sweet Yorkie!! She reminds me of little Stella :-)

Pet sitter: I actually don’t know, a young adult I believe. Her previous owners used to throw her against walls and leave her tied up outside without shelter. The court case is this Wednesday to hear if she is officially turned over to the shelter. I hope the owner gets charged with cruelty too!

About a week went by and my wife inquired about the dog.

Pet sitter: They refused to sign her over to us, so another court date next month. Meanwhile I’m falling in love with her! Next court date is in a few weeks. It sounds like they probably will get her back.

My wife: That’s insane. The widow has admitted that the son throws the dog against the wall. How can that happen??

Pet sitter: I don’t know why, but they’re not being charged with cruelty. Only with abandonment and failure to get vet care. Apparently that’s not very bad in the judge’s eyes. The whole thing makes me sick.

When my wife later showed me the pictures and the text messages, I asked, without thinking: “What if we kidnapped that dog and found her a new home?”

Now before you make any judgments, let me describe my wife’s long history of animal rescue. Unlike most of us who feel pity for animals but ultimately decide that their plight is not our responsibility, my wife regards endangered critters as if they’re her own. She has an uncanny knack for coming across lost dogs on the road; in the nearly four years I’ve known her she’s saved three or four. A few years ago on our birthdays — we were born one day less than a year apart — we saw a terrier mix get hit by a car on our way to a scheduled cooking class. The dog’s owners weren’t around and the girl who hit the dog was a crying mess. At the scene of the accident, my wife scooped the scared and howling terrier mix into a sweatshirt and we drove him to the SPCA. Unfortunately he couldn’t be saved, but he died comfortably. And my wife did not regret sacrificing our fun.

So about two weeks ago on her way home from work, my wife visited our pet sitter and met Pancakes, who like our Stella played crazily with a little toy she pretended to "kill" and later snuggled up beside her on the couch while our pet sitter confessed not knowing what to do.

But what about Pancakes’ aggression, my wife asked.

The pet sitter explained that Pancakes had been quick-tempered initially, but since being away from her owners and treated kindly, she behaved well. I think she was just terrified in that home and around those people, she said.

My wife told her I’d mentioned the dog getting “lost” or “hit by a car.”

The pet sitter said Pancakes had run away from her once before on a walk.

“Losing” the dog might be unethical in one sense, my wife reasoned, but in another way understandable. (And this provokes a few questions which I probably never would’ve considered had I not met my wife: Whom do we expect animal rescuers and animal doctors to serve and protect — the animal in need or the person who “owns” it? And what if that person is cruel or negligent? What if prosecutors fail to levy an airtight cruelty case?)

It wouldn’t be difficult to find Pancakes a halfway house, I told my wife when she arrived back home. We could find her a new owner easily.

It’s such a shame, my wife said, the Yorkie is the most popular small breed in America, literally millions of people would take better care of her.

But rescuing Pancakes would risk your career and everything you’ve worked for, I said.

Of course it would, she replied, it’s an ethical dilemma.

But let’s say we save Pancakes’ life, what’s to keep the widow and her son from getting another dog?

Nothing, my wife said. If it’s not Pancakes who’s at risk then it’ll be another animal.

So what’s the right thing to do here? As a former reporter, I could call the shelter and find out the name of its legal representation and hassle the attorney until I receive the court records and then attempt to write an “investigative” story for my local newspaper. I could remind the attorney about the cruelty Pancakes suffered and hope the attorney would put aside the other cases no doubt piled on his desk — cases probably involving other forms of neglect and abuse toward living beings — and ask this attorney, with a straight face, to set aside all of those other obligations and focus on the suffering of a little dog.

Or should I do nothing? Regardless of the circumstances, I would be taking away the pet of a child suffering the anguish of losing a parent. Undoubtedly there are other facets I can never know. What was the father like? What was the marriage like? Who taught the boy how to be cruel? If the boy received appropriate counseling, could it be guaranteed that he’d never hurt an animal again? And is it appropriate for me to sit in moral judgment of the owner and her son, the judge, and the attorneys? All that’s really known is that my wife and I share a love that is (oddly enough) centered around animals and right now we’ve encountered one in danger.

But is Pancakes any of our business?

Two months after our wedding, my wife and I traveled to Ohio, where I’m from, for a party with extended relatives. On the morning of the event we found an extraordinarily sick cat who belonged to the party center’s caretaker. Named Trudy, she was two years old and less than four pounds; her coat looked slightly mangy, her ribs protruded from her sides, and she struggled to breathe.

The caretaker told my wife that he loved Trudy but he didn’t have money for veterinary care, and he was convinced she had licked off a chemical medication that he had misapplied. Her diet consisted of table scraps, too, and she spent many days and nights outside and vulnerable to predators. Against my wishes, my wife told the caretaker she was a veterinarian and offered to bring Trudy back home with us to treat her, at our expense, or euthanize her if her quality of life was untenable. With obvious sadness, the caretaker agreed that Trudy potentially getting better mattered more than him having a cat. He signed her over to us and after driving six hours with a sick, vomiting cat on our laps, we fostered Trudy for several months and spent probably one thousand dollars on deeply discounted veterinary care.

In two different surgeries, my wife removed a quarter-sized polyp inside Trudy’s throat, spayed her, cleaned her teeth, and tacked her stomach to her body wall to fix a hernia. She hung adoption posters in her clinic and fed Trudy a sensitive-stomach diet, too. But despite everything, Trudy stayed sick. She never gained more than a pound and continued wheezing and vomiting up her food just the same as when we’d assumed her guardianship. It was a depressing foster situation and beyond that it was an agonizing night when my wife asked a co-worker to visit our house for a private and dignified euthanasia.

It’s now been probably three months since we lost Trudy and she remains a sore topic between us. For my wife it’s because she feels like she failed Trudy. For me it’s because less than a year ago at our wedding, with our dogs (Stella included) at our side, I promised my wife that I’d support her values — regardless of convenience.

Nick Kowalczyk is a professor of writing at Ithaca College.