UPDATED: No cause yet, rescue workers scramble to help. "It sounded like three bombs," local resident says 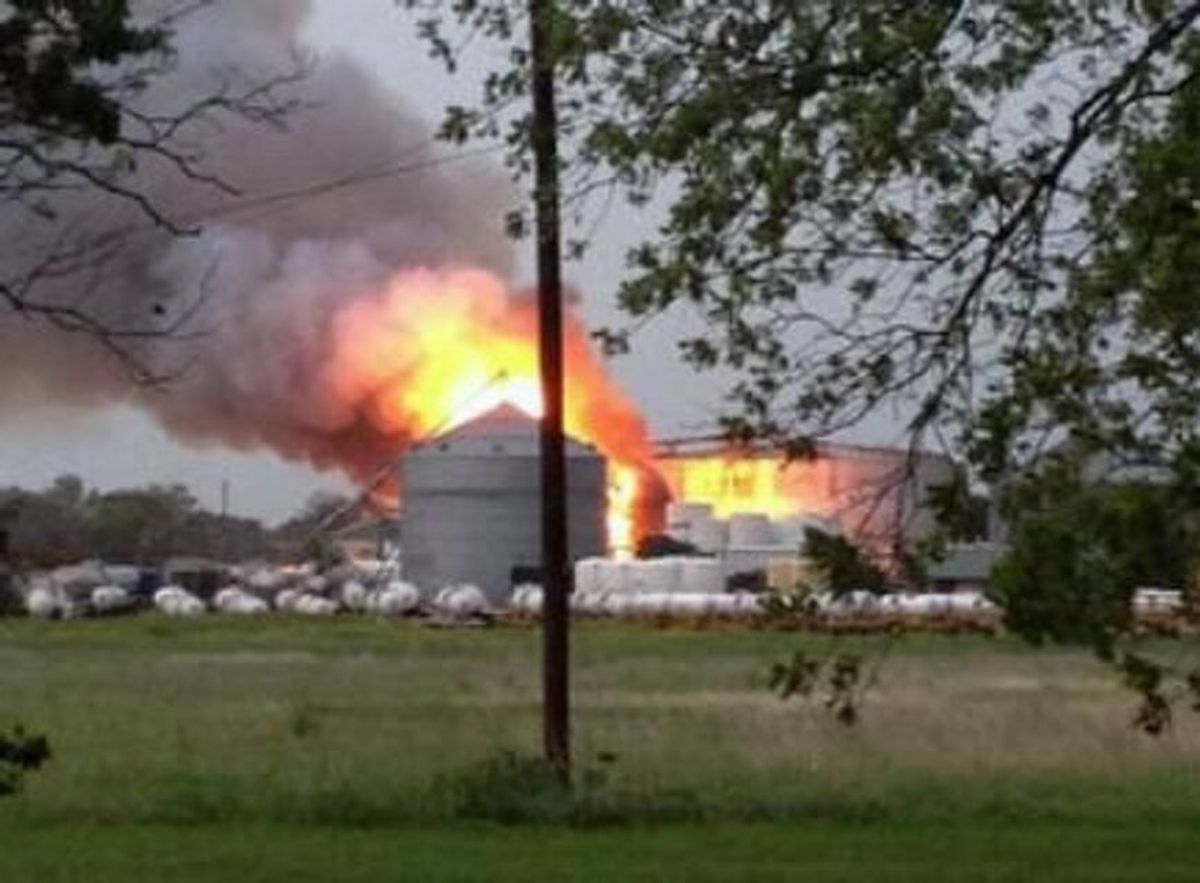 An explosion Wednesday night at a fertilizer plant near Waco sent flames shooting high into the night sky, leaving the factory a smoldering ruin, causing major damage to nearby buildings and injuring numerous people.

The blast at the plant in West, a community north of Waco, happened shortly before 8 p.m. and could be heard as far away as Waxahachie, 45 miles north of West.

Debby Marak told The Associated Press that when she finished teaching her religion class Wednesday night, she noticed a lot of smoke coming from the area across town near the plant, which is near a nursing home. She said she drove over to see what was happening, and that when she got out of her car two boys ran toward her screaming that the authorities told them to leave because the plant was going to explode. She said she drove about a block before the blast happened.

"It was like being in a tornado," the 58-year-old said by phone. "Stuff was flying everywhere. It blew out my windshield."

She drove 10 blocks and called her husband and asked him to come get her. When they got to their home about 2 miles south of town, her husband told her what he'd seen: a huge fireball that rose like "a mushroom cloud."

More than two hours after the blast, there were still fires smoldering in what was left of the plant and others burning in nearby buildings. In aerial footage from Dallas' NBC affiliate, WDFW, dozens of emergency vehicles could be seen amassed at the scene. Entry into West was slow-going, as the roads were jammed with emergency vehicles rushing in to help out.

Authorities set up a staging area on the local high school's football field, which was lit up with floodlights. Ambulances and several dozen injured people could be seen being taken away or seated in wheelchairs as they are treated and await transport.

Department of Public Safety troopers were using their squad cars to transport those injured by the blast and fire at the plant in West, a community north of Waco, Gayle Scarbrough, a spokeswoman for the department's Waco office, told television station KWTX. She said six helicopters were also en route to help out.

Glenn A. Robinson, the chief executive of Hillcrest Baptist Medical Center in Waco, told CNN that his hospital had received more 40 more people for treatment, both by ambulance and private vehicle. He said the injuries included blast injuries, orthopedic injuries, large wounds and a lot of lacerations and cuts. The hospital has set up a hotline for families of the victims to get information, he said.

Robinson did not immediately return messages from The Associated Press.

American Red Cross crews from across Texas were being sent to the site, the organization said. Red Cross spokeswoman Anita Foster said the group was working with emergency management officials in West to find a safe shelter for residents displaced from their homes. She said teams from Austin to Dallas and elsewhere are being sent to the community north of Waco.

A West Fire Department dispatcher said any casualties would be transported to hospitals in Waco, which is about 90 miles north of Austin.

The explosion knocked out power to many area customers and could be heard and felt for miles around.

Brad Smith, who lives 45 miles north of West in Waxahachie, told the station that he and his wife heard what sounded like a thunderclap.

Lydia Zimmerman, told KWTX that she, her husband and daughter were in their garden in Bynum, 13 miles from West, when they heard multiple blasts.

"It sounded like three bombs going off very close to us," she said.

In 2001, an explosion at a chemical plant killed 31 people and injured more than 2,000 in Toulouse, France. The blast occurred in a hangar containing 300 tons of ammonium nitrate, which can be used for both fertilizer and explosives. The explosion came 10 days after the Sept. 11, 2001, terrorist attacks in the U.S., and raised fears at the time it was linked. A 2006 report blamed the blast on negligence.