The gun measure failed because of dumb filibuster rules, not Joe Manchin's supposed "lack of confidence" 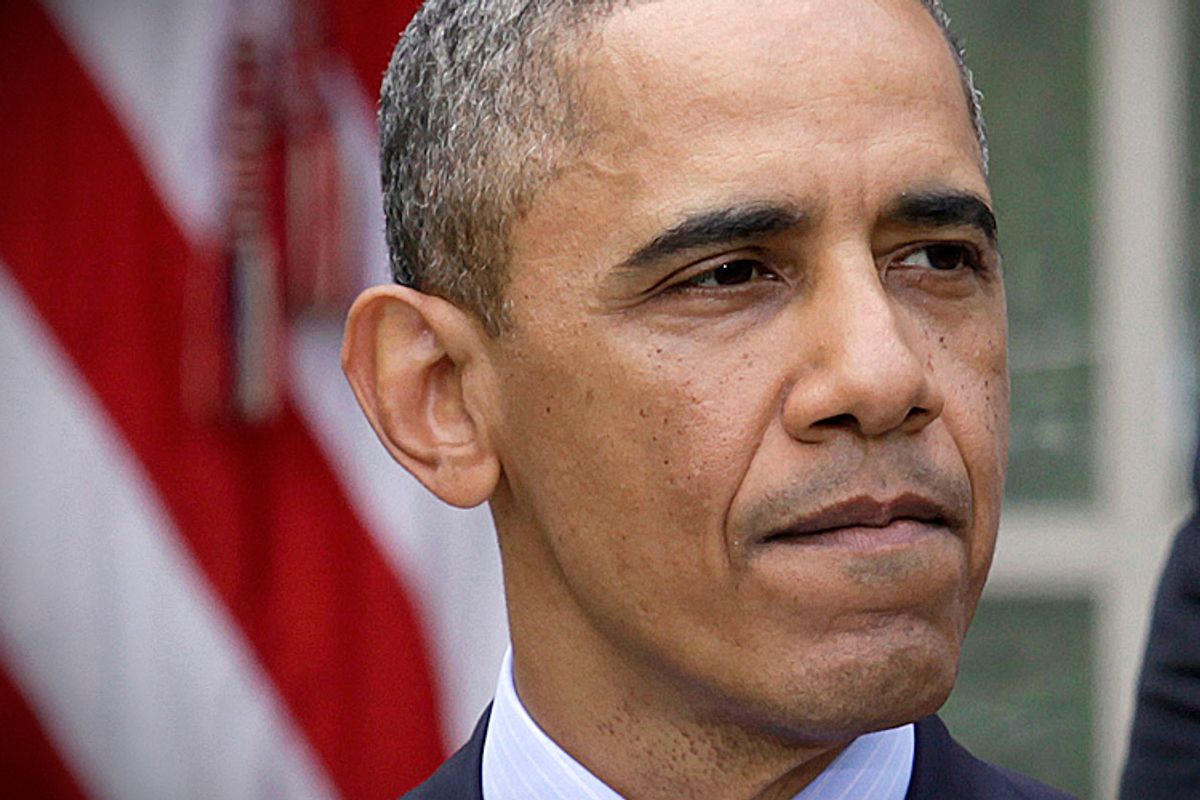 President Obama speaks in the Rose Garden of the White House in Washington April 17, 2013. (Reuters/Yuri Gripas)
--

A minority of senators voted against a bill that would have expanded background checks for gun sales -- a proposal that was widely acknowledged to fall well short of the sort of gun control necessary to actually curb America's shocking amount of gun crime, but one that was also determined to be the strongest possible measure with any hope of passing Congress -- and that minority "won" the vote, because the Senate has weird made-up nonsense rules. Four Democratic senators, from some of America's least populous states, voted with the winning minority.

Those Democrats were Heidi Heitkamp (N.D. -- a state that should not be a separate state from South Dakota), Max Baucus (Mont.), Mark Begich (big icy pool of oil by Canada) and Mark Pryor (Ark.). Baucus, Begich and Pryor are up for reelectiion next year. Heitkamp's excuse is that the entire population of her state is old white gun nuts. Liberals may call for those senators to be punished. Democrats will respond, correctly, that if those senators lose primaries to more liberal candidates, Republicans will win those seats.  The correct response, as always, is to eliminate the U.S. Senate.

There were two conflicting arguments against the bill: One, that it was an unreasonable and unconstitutional infringement on gun rights, and two, that it wouldn't have prevented the worst of our most recent mass shootings. The first line isn't true, even by the standards of our current Supreme Court's understanding of the Second Amendment. The second is a decent argument for much stricter gun laws.

BuzzFeed's Ruby Cramer and Evan McMorris Santoro have a piece up blaming conservative Democrat Joe Manchin for the failure of the background check measure he sponsored with Pennsylvania Republican Pat Toomey. Manchin apparently caused the bill to fail with an inept media strategy. He accidentally told everyone about a meeting with the NRA, and he was insufficiently optimistic on "Morning Joe," and that is why gun control failed.

This is a weird -- though common -- theory of how Washington works. The proposal failed because Manchin "lost confidence" and because his careful negotiations were improperly leaked to the media. The measure failed because a bunch of asshole senators voted to filibuster it, and they were able to do so because Harry Reid made a deal with Mitch McConnell to preserve the filibuster a few months ago. (If it weren't for the fact that a leadership challenge would be a massive political catastrophe for the party, Reid's filibuster "compromise" would look more and more like grounds for his replacement as majority leader every day.) Contributing to that failure: The right-wing media's various hysterical lies about the measure, the paralyzing fear of red state Democrats, and the fact that the Senate, like most of the rest of Washington, is never responsive to the will of the majority.

If you want a mildly counterintuitive "meta" explanation for the bill's failure, look to its modesty. If liberals had reached for the stars and not treated an assault weapons and high-capacity magazine ban as effectively dead in the water from the beginning, the background check expansion could've become the reasonable, moderate alternative, instead of the centerpiece of the new gun control effort. The Manchin-Toomey amendment became the central, showpiece gun control measure, instead of the gun control compromise it would be safe to support while voting against the crazy liberal gun control bills. With the bipartisan compromise now toxic, the safe vote for on-the-fence senators became "do nothing or maybe make guns easier to get."

Cheer up, though! It was probably doomed regardless and yesterday's vote was likely meaningless. By last week it was increasingly apparent that if the proposal had managed to pass the Senate, it wouldn't have gotten anywhere in the House. That became true the day the NRA officially opposed it. If Boehner has the stomach to pass another bill without a majority of his caucus supporting it, it's going to be immigration or a budget, not gun control. He's not crazy.

In the near future there is no hope for national gun control, even of the purely symbolic sort. Longer term, the currently well-funded groups founded by Gabrielle Giffords and Michael Bloomberg may eventually grow to have some influence in congressional elections. Individual states will certainly pass stricter gun control (which will be effectively useless unless those states also build border fences). But the makeup of our entire federal government -- favoring small states and rural areas -- makes their job much harder than that of the NRA, which successfully built its massive list years ago and then moved gradually to the fringe, along with much of the Republican Party.

Until we eliminate the Senate, this blocking, by the minority, of a hugely popular and quite modest gun control measure ought to encourage the mainstream political press to perhaps interrogate the legitimacy of the 60-vote threshold a bit more critically, but probably we will just move on to budget stuff again.