The Internet's front page doesn't like being tarred as a vigilante. But it also knows it is guilty 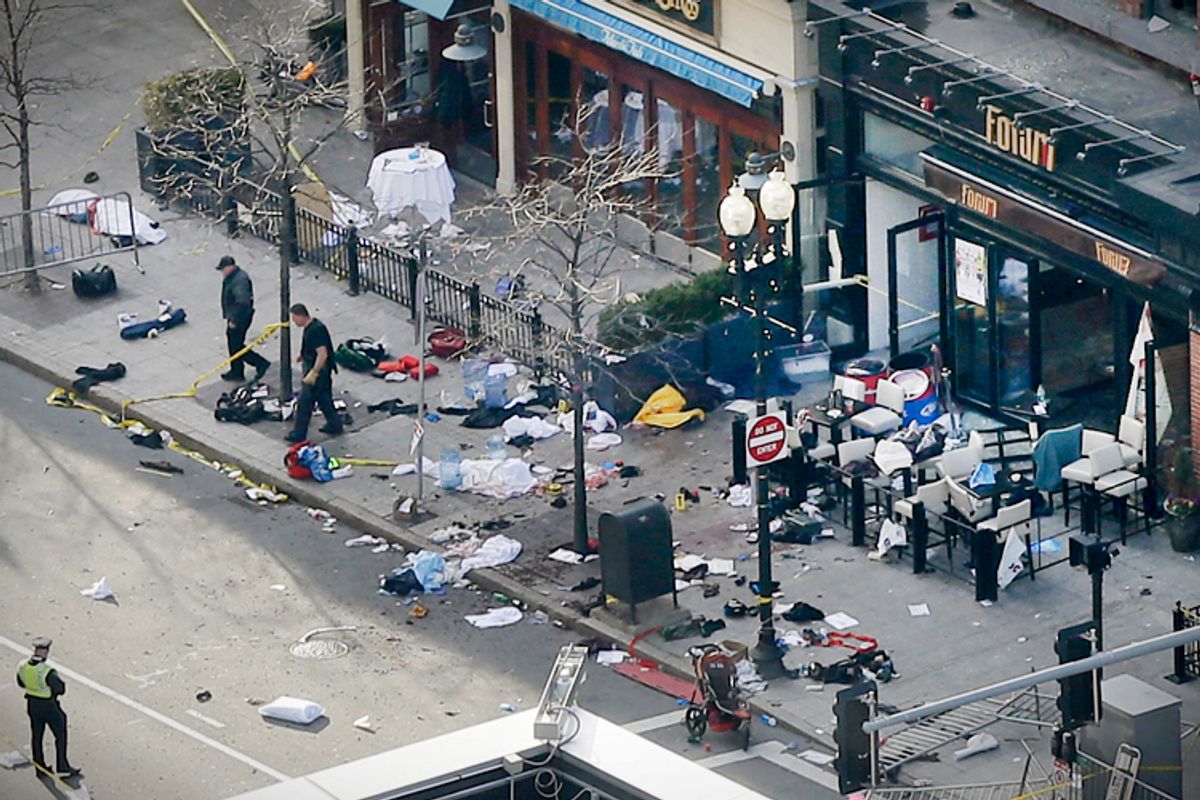 One of the blast sites on Boylston Street near the finish line of the 2013 Boston Marathon is investigated and guarded by police in the wake of two blasts in Boston Monday, April 15, 2013. (AP Photo/Elise Amendola) (Elise Amendola)
--

Reddit is very upset. "The media" is being mean. Multiple outlets are labeling the site's crowdsourced search for the Boston bombers as dangerous online vigilantism. And yet, at the very same time, prominent media outlets -- namely the New York Post -- are engaging in far worse behavior by plastering on their front page photos of supposed "suspects" who are in all likelihood completely innocent. Hypocrisy alert!

Reddit has a thin skin at the best of times. But in a moment of great national angst, tempers are especially prone to flaring. One Redditor even started a thread in the subreddit Find Boston Bombers begging "the media" to be more responsible: "Media Outlets, please stop making the images of potential suspects go viral, then blaming this small subreddit for it. And read the rules we've imposed before calling us 'vigilantes'."

The opening post in that thread, from "oops777," declares that "Until the media got involved, none of the images were going anywhere but to the FBI."

Oops777's declaration has some serious problems.

First, there's the notion that the hundreds of photos collected together and exhaustively scrutinized on Reddit were only headed to the FBI, before the damn media got involved. Sure, one of the rules of Find Boston Bombers is "Do not make any images viral. Limit reposting images outside of this sub.” But that's arrant and unenforceable nonsense. The very act of aggregating and discussing these photos in public is the first step in igniting viral behavior. Reddit, at its core, is a mechanism for making things go viral. It's the "front page of the Internet," remember? If Reddit is looking for the Boston bombers, then, almost by definition, the rest of "the Internet" is watching.

But there's an even deeper disconnect in play here, and that's the idea that Reddit is somehow not part of "the media." Again: front page of the Internet! Individual Redditors may not be journalists but Reddit is very much an integral part of whatever we define as "the media" in 2013. Reddit breaks stories, Reddit steers huge flows of readers around the world, Reddit even sets news agendas -- if it's hopping on Reddit, then the rest of us better start paying attention. Hell, Reddit is owned by Condé Nast, one of the world's great media empires! Reddit can't just step aside and disclaim responsibility for how other media outlets use or abuse the actions of Reddit. Want the media to be more responsible? First, heal thyself.

But it is the glory of Reddit that it is inherently self-aware, that in its own wrestling with the consequences of its actions, all these contradictions and paradoxes are part of the conversation. In fact, the highest-rated comment in response to oops777's opening post signified exactly that self-awareness:

"I wouldn't say the images aren't going 'anywhere but to the FBI'. You have to admit, they're actually going everywhere."

The Find Boston Bombers subreddit thread asking media outlets to be more responsible is a remarkable text. For every commenter declaring that Redditors have been "super respectful" in their analysis of photographs, there's another mocking that commenter by noting that public discussion of whether someone is guilty of an act of horrific terrorism is by definition not respectful. Commenters who simply don't see what the big deal is, suggesting that, for example, "If I were one of the people singled out in these photographs, I'd have posted my innocence and cleared it up rather quickly," are met with the observation that a public outing can have dreadful unforeseen consequences. Throughout all the threads in Find Boston Bombers, Redditors are constantly urging each other to avoid racism and to be scrupulous about not releasing personally identifying details. And yet at the same time that higher standards are urged by some, those standards are broken by others. This is the agony and ecstasy of Reddit. Crowdsourced media can be simultaneously responsible and irresponsible. What's so fascinating about Reddit, is that like the Internet itself, it contains multitudes.

In the grand scheme of things, what the New York Post did is far, far worse than anything that I've seen in Find Boston Bombers. If the editors at the Post had devoted just five minutes to the kind of self-reflection that is pulsing through Reddit right now, they would have realized that what they were doing was unconscionable. The only logical explanation for the New York Post to prominently display the images of two young men who had a darker "skin tone" than other potential "suspects" is the worst kind of fear-mongering racism. Not to put too fine a point on it: It's evil.

Reddit is not evil, though, surely, some Redditors are racist, and some probably have no problems stirring up lynch-mob hysteria. But Reddit's big problem is that although it can and does make rules for appropriate behavior,  it's hard to enforce those rules without the kind of heavy-handed moderation and censorship that most Redditors can't abide. That means that there is always going to be behavior on Reddit that outsiders find objectionable. And when you're the front page of the Internet you're going to have a high profile. Reddit's a big deal. Reddit sets things in motion, spawns viral memes like confetti in a parade. So of course the rest of "the media" is going to be watching, and commenting, and criticizing. If Reddit doesn't like it, Reddit's got an easy option. Lock the doors and shut the windows, or at least draw the curtains. Because the scrutiny is only going to grow.