Giffords is a fighter, and NRA will be sorry

The post-Newtown gun-control movement must undo a decade of Democratic inaction on guns. And it will 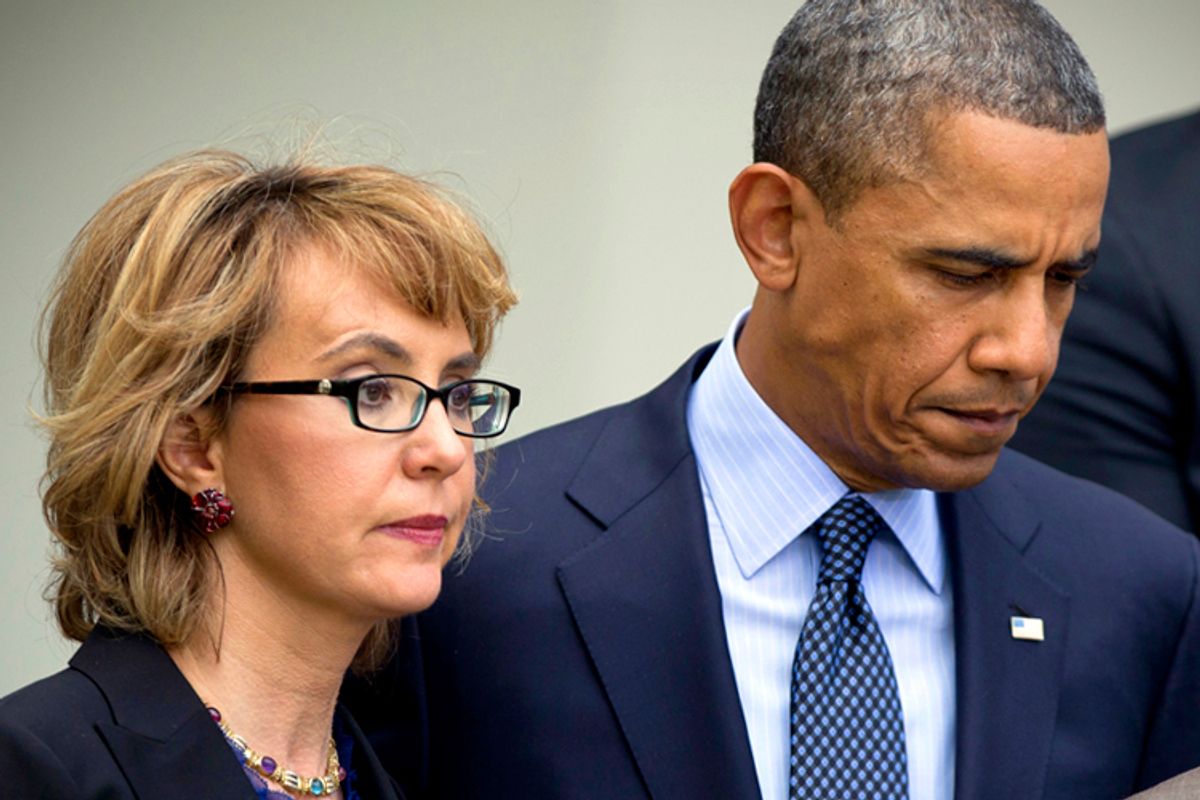 Adorable red-haired Daniel Barden will live forever, but only in photographs: The 6-year-old with two eternally missing front teeth was murdered in the Sandy Hook massacre. So if his father, Mark, isn’t giving up on gun control, after losing not only his beloved son but the shameful Senate vote on background check legislation Wednesday, then nobody else is allowed to give up.

President Obama let Mark Barden introduce him before his angry Rose Garden reaction to the failure of the Manchin-Toomey compromise, and to me that signaled a new, long-term, bare-knuckled and visceral approach to the issue of guns. Barden reminded us that the motto of the gun-control group he co-founded, Newtown Promise, is, “Our hearts are broken, but our spirits are not.” That’s got to become the animating drive of a nationwide movement to fight the National Rifle Association and its allies, on every level. This defeat, however crushing and shameful, is just a beginning.

Not only Barden and Obama but Gabrielle Giffords took a shockingly hard line after the Senate vote. The former congresswoman also appeared at the Rose Garden press conference, and afterward she sent out an angry statement – she couldn’t speak at the press conference because her speech is unreliable since she was shot in the head in January 2011. I read these lines from Gifford, and I wondered about them:

“When I was shot point-blank in the head.” I winced at those words. But Giffords was even more brutal in a New York Times Op-Ed that went up Wednesday night.

Some of the senators who voted no have also looked into my eyes as I talked about my experience being shot in the head at point-blank range in suburban Tucson two years ago, and expressed sympathy for the 18 other people shot besides me, 6 of whom died … And still these senators decided to do nothing. Shame on them ….

Speaking is physically difficult for me. But my feelings are clear: I’m furious. I will not rest until we have righted the wrong these senators have done, and until we have changed our laws so we can look parents in the face and say: We are trying to keep your children safe.

Giffords’s fury is earned. But let’s be honest: Democrats mostly gave up the gun control fight more than a dozen years ago, running scared as Democrats so often do, letting the NRA run the debate. Red state Democrats especially, including Giffords (who had an NRA rating of C, compared with Arizona progressive colleague Raul Grijalva's of F), were often given a pass on gun legislation. Even Obama’s former chief of staff Rahm Emanuel (now the anti-gun mayor of gun-poisoned Chicago) fought Attorney General Eric Holder when he wanted the administration to support renewing the assault weapons ban, reportedly telling Holder to “shut the fuck up.” (I can’t believe Emanuel used the F-word, but the rest of the story appears to be true.)

And it’s become a law of nature: When Democrats run away from their legacy – whether on civil rights, anti-poverty programs, climate change or gun control – Republicans don’t recognize their conciliation and meet them in the middle: They run far to the right. They reject former Republican ideas – cap and trade, the individual mandate for health insurance, and even background check legislation, which was once the “reasonable” alternative to more stringent gun control, supported by not only Republicans but the NRA.

Wayne LaPierre learned that lesson well. Even after Newtown, he moved the debate to the right, rather than compromising. (By the way, even the vote to toughen sanctions on illegal gun trafficking failed Wednesday.) And while I gave myself a demerit today for predicting that Newtown, and the NRA’s deranged reaction to it, would help the cause of gun control, I neglected to give myself credit for predicting that Senate Majority Leader Harry Reid’s craven cave-in to the NRA – stripping Sen. Dianne Feinstein’s assault weapons ban from the official Democratic bill – wouldn’t assure the passage of background checks. I was right. But it was easy to be right on that issue. The NRA’s hold on Congress was becoming clear. And the Democratic Party’s unfamiliarity with tough, winning legislative politics was becoming clearer.

But this defeat is just the beginning, not the end, of a serious gun-control movement in this country. We should be ashamed that there was no gun control drive after Giffords was grievously wounded and six people were killed in Tucson. And I wonder if she was calling us on it in her emailed statement and Op-Ed Wednesday.

Certainly Tucson hero Patricia Maisch called the Senate on it. Maisch grabbed the extra magazine from Jared Lee Loughner in Tucson – a magazine that should have been illegal – before he could reload, and then he was captured. Today she was a hero for standing up in the Senate and yelling, “Shame on you!” Giffords echoed Maisch in her Times Op-Ed, declaring, “Shame on them.” We need a hell of a lot more of that.

But Giffords and Maisch and Mark Barden aren’t the only signs of a change in the political climate. Let’s not forget that Joe Manchin, who had an A rating from the NRA, called the NRA liars on national television this morning. Let’s not forget that while Montana’s Max Baucus and North Dakota’s Heidi Heitkamp were cowards today, voting against Manchin-Toomey, Montana’s Jon Tester and North Dakota’s Tim Johnson did the right thing. And a president too often given to compromise called it a “shameful” day for Washington.

Democrats and a handful of Republicans of conscience just have to get used to fighting hard on this issue. I'll let Gabby Giffords have the last word:

Mark my words: if we cannot make our communities safer with the Congress we have now, we will use every means available to make sure we have a different Congress, one that puts communities’ interests ahead of the gun lobby’s. To do nothing while others are in danger is not the American way.