New proposal will do little to fix our broken system, and passing it will cost Obama real capital. Sound familiar? 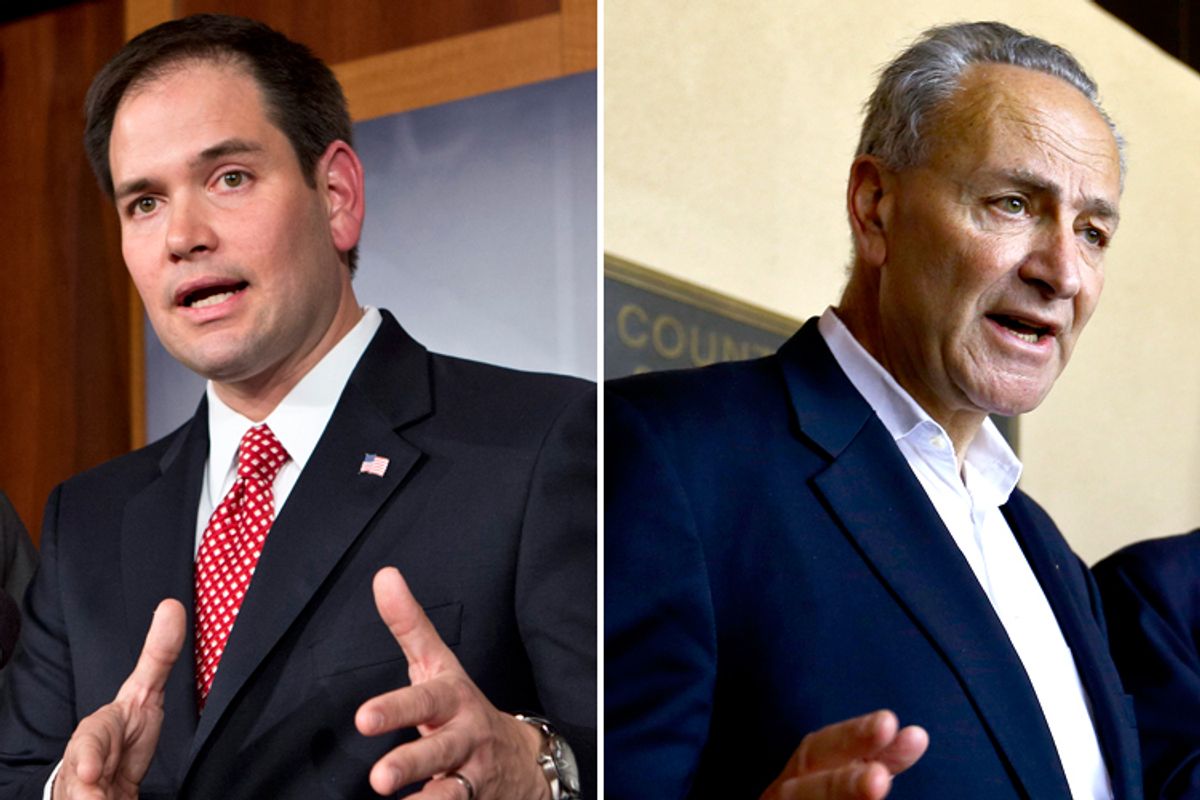 The road to citizenship isn’t exactly shovel ready. In fact, even calling it a road might be a stretch. It’s more like a long on-ramp. With a tollbooth. And potholes. And a guard station. And a giant electrified fence.

In their desire to find a compromise acceptable to the chronically short-sighted and self-destructive Republican Party, Democrats have crafted an immigration bill that is for the most part as unobjectionable as it is uninspired. The bill cobbles together a series of pragmatic concessions that, while perhaps sufficient to overcome conservative objections, will likely prove wholly insufficient at actually addressing the problem it was designed to solve — that is, fixing our broken immigration system. The tangle of hurdles and exclusions, loopholes for businesses and pitfalls for immigrants, is precisely the mess we should be cleaning up, not making worse.

There are some great things about the immigration reform bill put forward by the so-called Gang of Eight in the Senate. Activist Prerna Lal has combed over the details here. Specifically, all deportations of law-abiding undocumented immigrants who arrived in the United States before Dec. 31, 2011 (a key compromise threshold date) would be halted. Asylum and adoption procedures would be improved and the rights of some immigrants to have lawyers in court would be strengthened. Current visa backlogs would be cleared. Visa categories would be created or expanded for science and technology workers, farmworkers and the families of immigrant workers. And some immigrants would indeed have access to citizenship, largely through a 13-year waiting period and process.

Plus, even if you can get to the road, it’s layered with traps. First of all, the new system would be strongly tied to employment and employers. That makes it hard for the millions of undocumented immigrants contributing to the informal economy to prove their work history and qualify for citizenship. And new immigrants coming into the country may be unduly beholden to the whims, and potential abuses, of employers.

As it stands now, the bill would also require all employers to use the deeply flawed E-Verify system to confirm the status of workers. According to a study, small businesses will have to spend upward of $25,000 each to get E-Verify up and running, and even then the system is over 50 percent inaccurate. The bill would also spend $4.5 billion dollars on increased border security, despite the fact that most immigrants arrive through approved travel and simply overstay their visas and unauthorized border crossings have sharply declined. Not to mention the fact that the Obama administration already spends more on immigration enforcement than all other federal law enforcement priorities combined. At a time when Republicans say there’s not enough money to make sure that poor kids can eat, they can scrounge up billions for fencing and drone patrols along the Mexican border.

And after all that, many conservatives still don’t like the bill. “The Gang of Eight's bill is aggressive and outrageous amnesty,” Republican congressman Steve King (Iowa-4) said in a statement. “Republicans who support this bill have effectively said to Americans, ‘we are prepared to sacrifice the Rule of Law on the altar of misguided and erroneous political expediency’.” And so the stock in trade tactic of Democrats in the Obama era plays out again, with Democrats asking not for what they want but a watered down compromise of what they think Republicans will embrace, which ardent and extremist Republicans nonetheless spit on and shut down. That, having so decisively won the last election largely because of the increased power of Latino voters, Democrats would still be so spineless and Republicans would still be so tone-def says a lot about the S&M-like pattern into which both parties have fallen and from which they can’t seem to get up.

The Gang of Eight bill is not all bad, and it could be much worse. But the immigration reform bill needs to be a starting point for passionate advocates and sensible politicians to improve upon — not a lowest common denominator that Republicans take their pick axes to and make even worse.