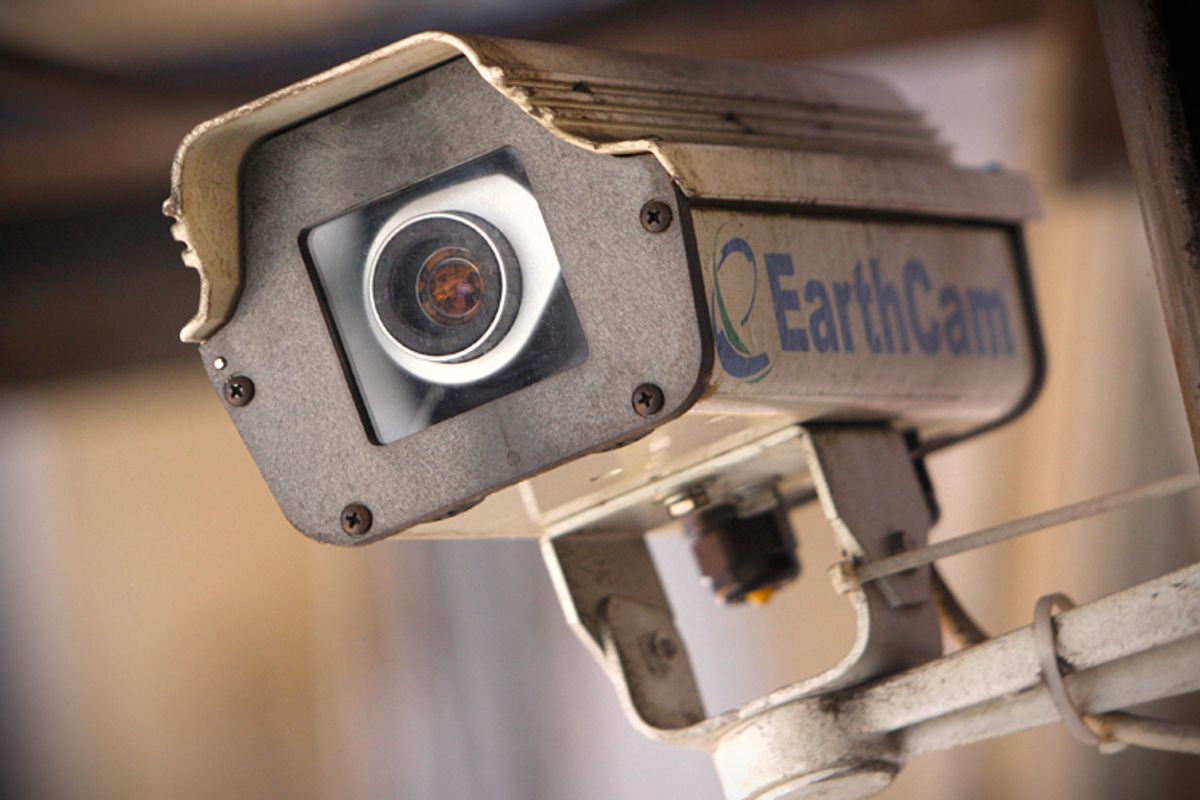 Agendas are hovering over the Boston bombings like hungry vultures desperate to rend a carcass. Exhibit A: In a post published at the Volokh Conspiracy, Stewart Baker, a senior Department of Homeland Security official in the administration of George W. Bush, argues that the Boston Marathon bombings prove that surveillance cameras are awesome and Congress should pass CISPA -- the Cyber Intelligence Sharing and Protection Act. CISPA is designed to create a structure in which private companies can seamlessly share information about their users with the government in cases involving threats to "cybersecurity." The House of Representatives passed the bill on Thursday, but the Obama administration has threatened to veto it in its current form.

Baker's support of CISPA is no surprise. Baker has a long history of supporting strong government surveillance powers at the expense of privacy. As far back as 1994 he was a National Security Agency official defending the notorious Clipper Chip in the pages of Wired magazine. Slagging off the ACLU and the Electronic Frontier Foundation is old hat for him. But his simplistic equation of cameras with CISPA does a serious disservice to the ongoing struggle to balance privacy rights versus the needs of law enforcement.

There seems to be little doubt that the surveillance society -- insofar as that term refers to video-camera coverage of urban areas -- is here to stay. The Boston Marathon bombings are the period on the end of that sentence. We may find it creepy and unsettling to realize that we are always being watched, but when disaster hits, we also seem to be very thankful that we can easily find pictures of the bad guys. Indeed, some of the same neighborhoods of the Internet that are most distrustful of government surveillance -- whether by camera or computer -- are also where we've seen some of the most energetic efforts to comb available footage and photographs for clues. When the bombs go off, everyone becomes a surveillance enthusiast.

And as long the bombs keep going off, that's likely to be true. In a perfect world, we might even figure out a way to keep the cameras on in a manner befitting a civilized society. On Thursday, barely an hour after the FBI released images of the bombing suspects, Slate's Farhad Manjoo published a thoughtful, nuanced essay arguing that we need more cameras, not fewer, to fight crime and terrorism.

Manjoo argues that if such surveillance is done the right way, then it becomes the best option from an unappetizing platter:

The costs of ubiquitous surveillance are real. But these are not intractable problems. Such abuses and slippery-slope fears could be contained by regulations that circumscribe how the government can use footage obtained from security cameras. In general, we need to be thinking about ways to make cameras work for us, not reasons to abolish them. When you weigh cameras against other security measures, they emerge as the least costly and most effective choice. In the aftermath of 9/11, we’ve turned most public spaces into fortresses -- now, it’s impossible for you to get into tall buildings, airports, many museums, concerts, and even public celebrations without being subjected to pat-downs and metal detectors. When combined with competent law enforcement, surveillance cameras are more effective, less intrusive, less psychologically draining, and much more pleasant than these alternatives. As several studies have found, a network of well-monitored cameras can help investigators solve crimes quickly, and there’s even evidence that cameras can help deter and predict criminal acts, too.

Civil libertarians can, and will, take issue with aspects of Manjoo's argument, but he at least maps out some terrain for a meaningful debate. He's taking a very hard issue and thinking it through.

That's not what Baker is doing. Baker is making a simplistic correlation designed to exploit the heat of the moment. He's delivering propaganda, not argument. In his world, since ACLU and EFF are obviously wrong about surveillance cameras, which help catch terrorists, they must also be wrong about CISPA, which will help catch malicious hackers and Chinese spies and who knows who else.

But the fight about CISPA, as it is currently taking place, is not about whether there should be no way at all for government to access the personal information of computer users when extreme situations warrant, but whether the language of this particular bill incorporates the proper balance between privacy protections and government and corporate needs. The Obama administration, civil libertarians and privacy activists believe it does not. The White House has specific issues it wants addressed. For example, the administration wants stronger protections for the most "sensitive" user information, and criticizes the bill's over-generous grant of liability protection to corporations.

But Baker's got no time for such subtlety -- not while a manhunt for the remaining Boston bomber suspect is still underway! Instead, he's swooping in on a traumatized nation and attempting to capitalize on the emotions and passion of the moment to recommend a sweeping endorsement of a significant expansion of government power that affects everyone who uses a computing device of any kind. Surveillance in the public square migrates into your phone. This kind of rank exploitation of tragedy and fear is exactly what happened with the Patriot Act after 9/11, and it's exactly the opposite of how a civilized, democratic society should behave. When the calamity of the moment captures the attention of the entire nation is exactly when we need to measure our arguments and our responses most carefully.