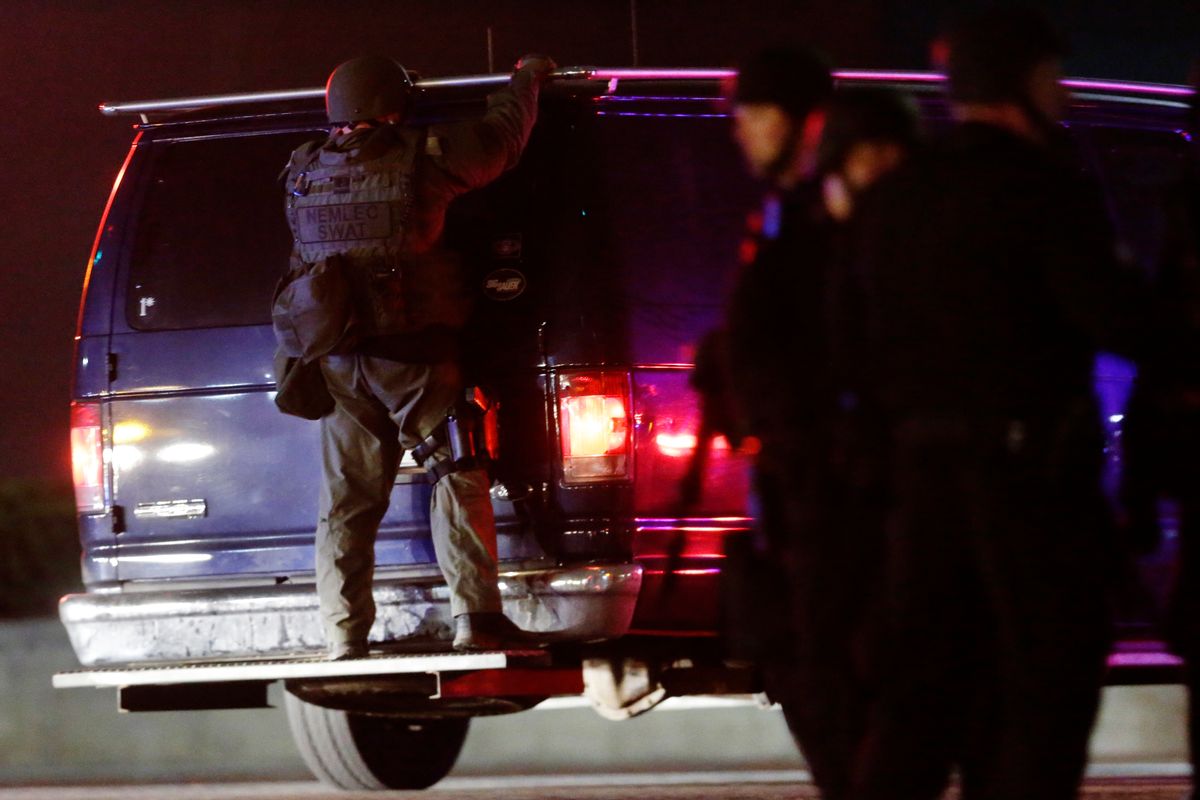 A police officers rides on the back of a van at a staging area as a manhunt is conducted for a suspect Friday, April 19, 2013, in Watertown, Mass. (AP/Matt Rourke)
--

WATERTOWN, Mass. (AP) — Two suspects in the Boston Marathon bombing killed an MIT police officer, injured a transit officer in a firefight and threw explosive devices at police during their getaway attempt in a long night of violence that left one of them dead and another still at large Friday, authorities said as the manhunt intensified for a young man described as a dangerous terrorist.

The suspects were identified to The Associated Press as coming from the Russian region near Chechnya, which has been plagued by an Islamic insurgency stemming from separatist wars. A law enforcement intelligence bulletin obtained by the AP identified the surviving bomb suspect as Dzhokhar A. Tsarnaev, a 19-year-old who had been living in Cambridge, Mass.

Two law enforcement officials told the AP that Tsarnaev and the other suspect, who was not immediately identified, had been living legally in the U.S. for at least one year.

In Boston, still on edge over the attack on the marathon, and its western suburbs, authorities suspended mass transit and urged people to stay indoors as they searched for the remaining suspect, a man seen wearing a white baseball cap on surveillance footage from Monday's deadly bombing at the marathon finish line.

Authorities urged residents in Watertown, Newton, Arlington, Waltham, Belmont, Cambridge and the Allston-Brighton neighborhoods of Boston to stay indoors. At least a quarter of a million people live in those suburbs. All mass transit was shut down, and businesses were asked not to open Friday. People waiting at bus and subway stops were told to go home.

The suspects' clashes with police began only a few hours after the FBI released photos and videos of the two young men, who were seen carrying backpacks as they mingled among marathon revelers. The bombings on Monday killed three people and wounded more than 180 others, and authorities revealed the images to enlist the public's help finding the suspects.

The images released by the FBI depict two young men, each wearing a baseball cap, walking one behind the other near the finish line. Richard DesLauriers, FBI agent in charge in Boston, said the suspect in the white hat was seen setting down a bag at the site of the second of two deadly explosions.

Authorities said surveillance tape recorded late Thursday showed the suspect known for the white hat during a robbery of a convenience store in Cambridge, near the campus of MIT, where a university police officer was killed while responding to a report of a disturbance, said State Police Col Timothy Alben. The officer died of multiple gunshot wounds.

From there, authorities say, the two men carjacked a man in a Mercedes-Benz, keeping him with them in the car for half an hour before releasing him at a gas station in Cambridge. The man was not injured.

The search for the vehicle led to a chase that ended in Watertown, where authorities said the suspects threw explosive devices from the car and exchanged gunfire with police. A transit police officer was seriously injured during the chase, authorities said.

Doctors at a Boston hospital where a suspect in the marathon bombings was taken and later died are saying they treated a man with a possible blast injury and multiple gunshot wounds.

The suspects' images were released hours after President Barack Obama and first lady Michelle Obama attended an interfaith service in Boston to remember the dead and the wounded.

At the Cathedral of the Holy Cross, Obama saluted the resolve of the people of Boston and mocked the bombers as "these small, stunted individuals who would destroy instead of build and think somehow that makes them important."

"We will find you," he warned.