Police: One suspect dead, other on run

UPDATED: Massive manhunt underway for second suspect after shootout at MIT and reports of explosions in Cambridge 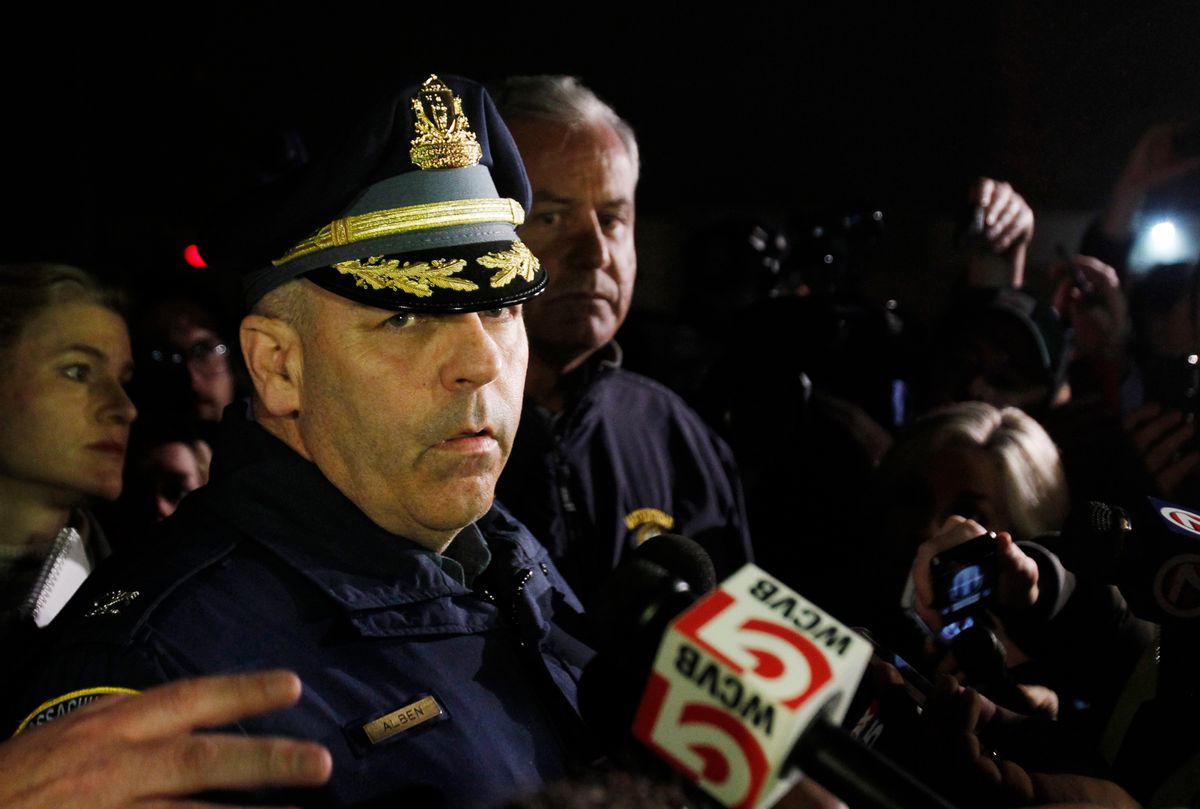 Superintendent and Colonel of the Massachusetts State Police Timothy P. Alben speaks to reporters about the status of the two suspects in the Boston Marathon bombings in Watertown, Massachusetts April 19, 2013. Massachusetts State Police warned people in the Boston suburb of Watertown not to open their doors and said they would conduct a door-to-door, street-by-street search due to what it called a fluid situation. REUTERS/Jessica Rinaldi (UNITED STATES - Tags: CIVIL UNREST CRIME LAW SPORT ATHLETICS) - RTXYRV9 (Reuters)
--

One of two suspects in the Boston Marathon bombing is dead after the killing of a university officer and a shootout with police, and a massive manhunt is underway for the other, authorities said early Friday.

Police locked down some neighborhoods in Boston and its western suburbs as they searched for the remaining suspect, known as the man in the white hat from marathon surveillance footage.

Authorities urged residents in Watertown, Newton, Arlington, Waltham, Belmont, Cambridge and the Allston-Brighton neighborhoods of Boston to stay indoors. All mass transit was shut down, and businesses were asked not to open Friday. People waiting at bus and subway stops were told to go home.

The Middlesex district attorney said the two men are suspected of killing a Massachusetts Institute of Technology police officer on campus in Cambridge late Thursday, then stealing a car at gunpoint and later releasing its driver unharmed.

Hours earlier, police had released photos of the marathon bombing suspects and asked for the public's help finding them. A new photo of the suspect on the loose was released later showing him in a grey hoodie sweatshirt. It was taken at a 7-Eleven in Cambridge, just across the Charles River from Boston.

The first images were released hours after President Barack Obama and first lady Michelle Obama attended an interfaith service at a Roman Catholic cathedral in Boston to remember the bombing victims.

Authorities say the suspects threw explosives from the car as police followed it into Watertown. The suspects and police exchanged gunfire, and one of the suspects was critically injured and later died at a hospital while the other escaped.

The FBI said it was working with local authorities to determine what happened.

Doctors at Beth Israel Deaconess Medical Center in Boston, where a suspect in the marathon bombings was taken and later died, said they treated a man with a possible blast injury and multiple gunshot wounds. They wouldn't say if the patient they treated, who came in with police, was the suspect in the black hat from marathon surveillance footage.

The MIT shooting on the Cambridge campus Thursday night was followed by reports of gunfire and explosions in Watertown, about 10 miles west of Boston.

The MIT officer had been responding to report of a disturbance Thursday night when he was shot multiple times, according to a statement from the Middlesex district attorney's office and Cambridge police. It said there were no other victims.