An expert explains the mystique of Chechen insurgents but says it makes no sense for them to attack the U.S. 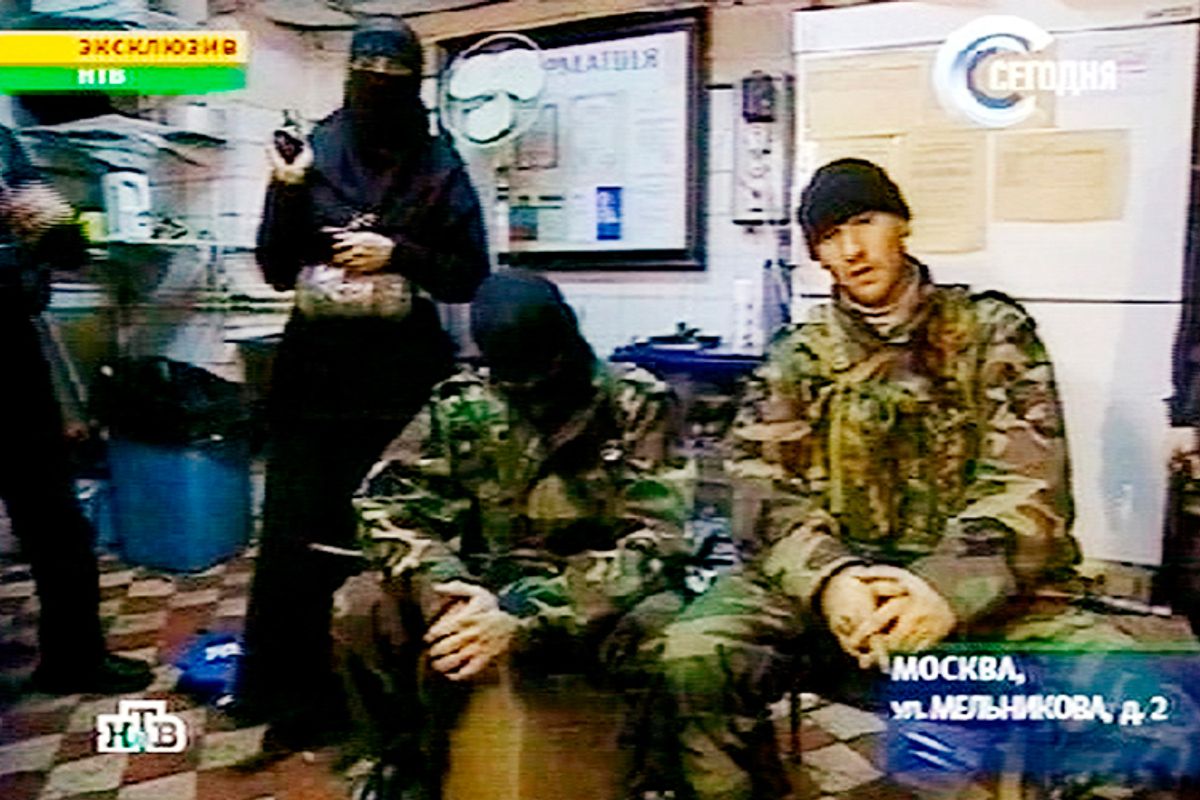 A man identified as Movsar Barayev, reported to be a leader of armed Chechens, who seized a crowded Moscow theater, right, is seen with another male captor, center, and a woman captor, left, somewhere inside the theater, Moscow, in this early Friday, Oct. 25, 2002 image from television by Russia's NTV. (AP)
--

At this point we still don't know how much time Tamerlan and Dzhokhar Tsarnaev, the two brothers suspected of committing the Boston Marathon bombing, spent in Chechnya. Dzhokhar, who emigrated with his family to the U.S. in 2002, when he was 9 years old, may have no memory of the place. But we do know that both brothers identified as Chechens: Tamerlan told a photographer his family had been driven from their homeland by "war" and that he wanted to wrestle for the Chechen Olympics team if the country ever won its independence from Russia. He put a Chechen dictionary and works of Chechen history on his Amazon wish list. Both brothers also described themselves as Muslims, and since the Chechen insurgency is overwhelmingly Islamist, it's very possible they viewed the bombing as a blow struck on behalf of a Chechen jihad.

But is it? To find out more about the history of Chechnya and how its troubles may or may not have migrated to our shores, I spoke with Robert W. Schaefer, a U.S. Army Special Forces Green Beret with many years experience planning and executing counterinsurgency and counterterrorism operations in the Caucasus region. He is the author of the highly-regarded 2011 book "The Insurgency in Chechnya and the North Caucasus: From Gazavat to Jihad."

I can't claim much knowledge of Chechnya, but still I was surprised when it was announced that the bombing suspects were Chechen. As I understood it, while the insurgency there is Islamist, it's first and foremost a nationalist movement seeking independence from Russia. Russia, not the U.S., is their enemy.

You're right it's not in the best interests of the Caucasus Emirate [a self-proclaimed alternative state in the region, regarded as a terrorist organization by both Russia and the U.S.] and Chechen insurgents to have any attack against the United States. It doesn't make good sense from their point of view. In fact, Dokka Umarov [leader of the Caucasus Emirate] said recently and very publicly that Chechens fighting in Syria should not be there, but should be home fighting for Chechnya.

But he wouldn't be saying that in the first place if there wasn't some push within the insurgency to pursue an international Islamist agenda.

Why would they say they were Chechens if they weren't?

Look, I'm in Special Forces. I'm a Green Beret. I'm constantly amazed at how many people who don't know that about me will tell me that they do special operations stuff in their job. When I ask them a couple of pointed questions about what they do, I find that they're, well, perpetrating a fraud.

So just as it's "cool" here to be Special Forces, or to be a Navy SEAL, it is cool in that part of the world to be a Chechen.

Chechens have always been a very martial society, and great fighters, ferocious. There were rumors for a while that Osama bin Laden had a personal bodyguard of about 20 Chechens. To hear that you have Chechens around will strike fear into the hearts of some people.

When the original Chechen War started with the Russians, there were videos going around of beheadings, those types of things. Later, in Afghanistan, there'd be members of the IMU [Islamic Movement of Uzbekistan, a radical Islamic movement that was responsible for the civil war in Tajikistan and has now been fighting for many years for the Taliban in Afghanistan] rounded up, and they'd tell people they were Chechens. If you say you're a Chechen, all of a sudden you get lots of extra respect.

You also now get what they call "Chechen ghost" stories. Someone will turn up doing something in an area, and if he speaks Russian, they'll say he's a Chechen. Then media outlets will pick up the rumor and pretty soon everyone thinks Chechens are in the area even if there aren't. That happens in Afghanistan and Iraq.

So they're legendary tough guys.

Absolutely, and they do everything in their power to perpetuate that legend. They've always had the idea that any one of their fighters was worth 10 of anybody else.

And this goes way back?

Yes, at least as far as the 1700s. They grew up on horseback, and were able to shoot rifles from horseback. Culturally, they had the idea of the blood feud. That's always been a part of their culture. Their national symbol is the wolf. They chose it because it's the only animal that, even when it's injured, will not whine or cry out, but will turn and face you and look you dead straight in the eye. That's how they consider themselves.

How important is Islamism to that identity?

First of all, the really important thing about any insurgent movement is it's never a homogenous, coherent group where everyone agrees 100 percent on what they're fighting for and what they see the end result being. That's really important and gets missed a lot.

It sounds like what started as a largely nationalist movement seeking to establish an independent Chechen republic with some democratic form of government has moved toward a more exclusively Islamist agenda.

That's absolutely what's happened. That's why I subtitled my book "From Gazavat to Jihad."

During the first war with Russia, from 1994 to 1996, you had a very small group of hardcore Islamists, but the majority of those fighting for independence were fighting for a Western-style democratic government. That's why you saw a lot of international support for the Chechens, and a lot of people giving the Russians a hard time, during that first war.

Around 1998, a lot more radicals came in and hijacked the movement. That precipitated the invasion of Dagestan in 1999 and the second Chechen War. Also, President Putin's rise to power. He rode in on that wave, by taking care of that problem. That's been the driver of much of his subsequent success, how he handled that conflict.

So Putin's personal reputation owes a lot to the Chechen situation?

Absolutely. He came in as the strong Russian leader when people were openly criticizing Boris Yeltsin, and he was very resolute in his actions.

Why were the Islamists able to hijack the movement?

The people of the North Caucasus have been Muslims for centuries, but under the Soviets, that was forced underground. Now, the kind of Islam that the people of that region practice is referred to as folk Islam. I'm not an expert, but it is important to remember that there are many different kinds of Islam.

The way Sufi Islam is practiced in the North Caucasus is not in line with the traditional or fundamentalist versions of Islam. The Sufis revere saints and visit their graves. They revere the graves of their ancestors. For radical Islam, that's a strict no-no.

During the first war, that small group of hardcore radicals came from some of the Middle Eastern countries to fight for Shariah. They were all fighting against a common foe, the Russians, and the Chechens did not say no to this group of Islamists because they were good fighters. They had money and were being backed by people and organizations in the Middle East. And they were fierce fighters as well. They named Ibn al-Khattab the "Lion of Chechnya," and for Chechens to do that, that's a huge compliment.

So then these radicals had a foothold, and Chechens won de facto independence from the Russians in 1996. But the president they elected was faced with warlords who were being financed by outside Islamist groups. They didn't want to give their guns up and surrender to this guy who wants a democratic government. They wanted Shariah. So they pushed for that and little by little Chechnya became a morass, an ugly lawless place, with criminal elements in there as well.

One influential leader to emerge was Shamil Basayev, one of the most infamous terrorists ever, who was responsible for the 2004 Beslan attack [on a school, in which over 380 people were killed, including 186 children].

So there was more and more influence of the radicals on the government, struggling with the president and forcing him to move closer and closer to radical Islam.

It sounds, though, that there might not be much popular support for the radicals' brand of Islam.

That's what the current president, who is supported by Putin, has claimed: We don't need these outsiders coming in to impose a foreign form of Islam. The problem is, many of the region's young men are more afraid of the local authorities than they are of the insurgents and terrorists. They never know when someone is going to be rounded up and disappeared. Any year of the U.S. State Department's report on human rights in the region will tell you about this at length.

That helps explain why members of the Tsarnaev family are so sure that the two brothers have been set up by the government or some other shadowy puppet master. It sounds paranoid or delusional, but apparently it happens all the time where they come from.

I've had very little chance to catch up on what's going on with the Tsarnaevs. But it's true that folks who come from there are not so quick to disparage conspiracy theories because of what they're used to from their own government. What they have to say about those dark forces behind the scenes will resonate with a lot of people there.

Is there a politicized Chechen diaspora, something like what the IRA used to be able to call on for support among Irish-Americans?

I don't know of anything like that in the U.S. We have had plenty of reports of Chechen or North Caucasus diasporas, large ones, in the Middle East, Turkey, Syria, Jordan and so on. And there are plenty of reports to show those folks are sending money. There are also plenty of non-Chechens who will send money toward that cause.

Nevertheless, it's very hard to see what the point of an attack like the Boston Marathon bombings would be for the Chechen insurgency.

I agree with you. I think those boys were probably used by somebody. They were probably told they were supporting one cause, and who knows if the people who were using them had anything to do with that cause?

Another thought is that they weren't really taking directions from anyone. You can see how the older brother, Tamerlan, might have felt like a failure, disappointing his father by dropping out of college, with a boxing career that never materialized. People who knew them say the younger brother was under his sway. Probably someone like that, who felt so powerless, would be very attracted to the powerful super-warrior image of Chechens. That along with the fiery certainty of Islamist rhetoric might be pretty tempting to a young man who felt weak and lost.

That doesn't seem out of the realm of possibility, but I haven't had the chance to read up on these guys. When you take a look, though, at the totality of things that have happened in the North Caucasus, this attack doesn't make sense as something connected to that conflict. If you really know what's going on, it doesn't make sense.