Dzhokhar Tsarnaev in custody and alive

Crowds are cheering here in Watertown, as law enforcement gets the best possible outcome it could have hoped for 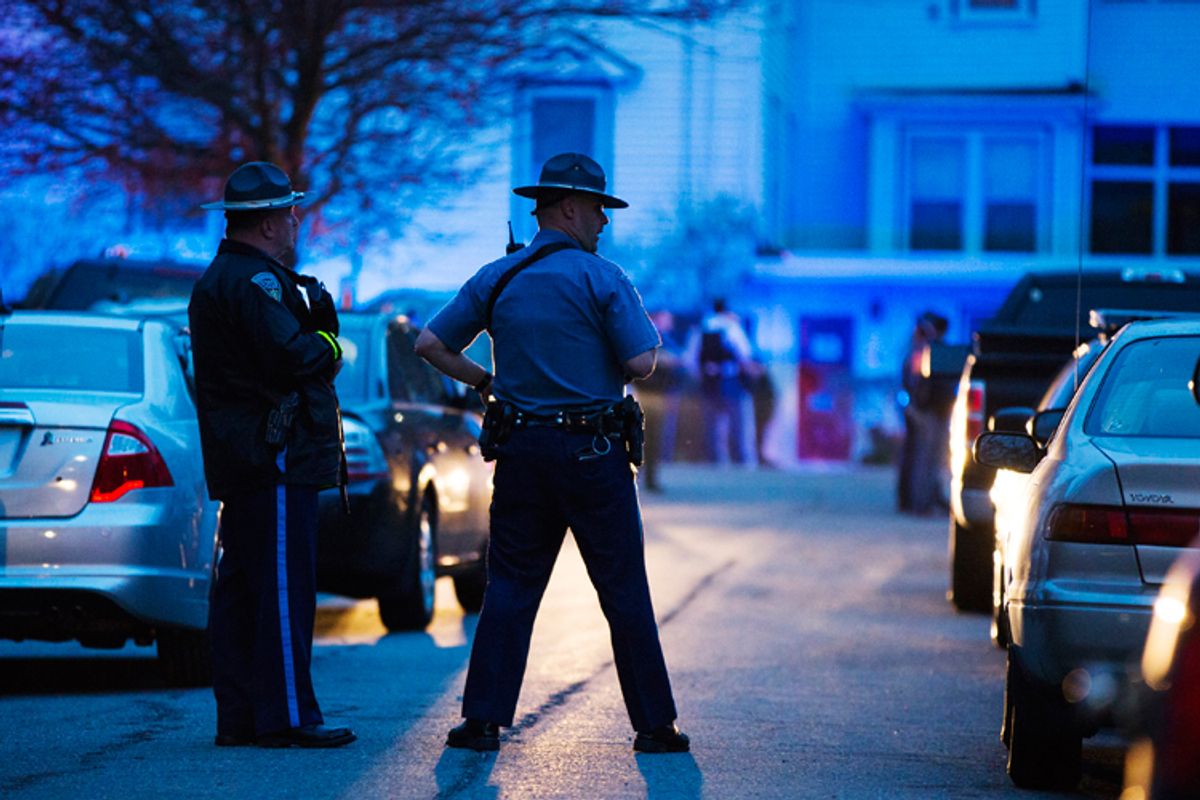 Law enforcement officials stand at the scene on Franklin St. as the search for Dzhokhar Tsarnaev, the surviving suspect in the Boston Marathon bombings, comes to an end in Watertown, Massachusetts April 19, 2013. (Reuters/Lucas Jackson)
--

WATERTOWN, Mass. -- A very bloodied Dzhokhar Tsarnaev, the individual thought to be the younger of two brothers suspected in the Boston Marathon bombing, has been apprehended.

Earlier in the evening, conflicting reports on Boston police scanners had suspect No. 2 being reported as alive or dead, his legs appearing to move or not from under a backyard boat on a small street in east Watertown, a close-in community in the Greater Boston area. But as a crowd cheered at 8:43, rumors were swirling that Dzhokhar Tsarnaev had been taken alive.

It is confirmed in east Watertown that the second suspect cornered here has been arrested following a firefight that resumed before 7 p.m. after ending last night. In that time the scene moved a few blocks closer to the tony boutiques of Watertown Square to this relatively small but densely populated residential street of two-family homes off Mount Auburn Street, the main thoroughfare through Watertown.

Tsarnaev may have sustained gunshot wounds today and it was thought he had himself booby-trapped below the boat wintering just outside the 20-block perimeter searched earlier in the day. Several more shots were fired around 7:40 p.m. and 7:54 p.m., discharges that could be heard about seven blocks away. The fresh gunshots, a volley that lasted 15 seconds, followed a longer barrage an hour earlier on Franklin Street, after infrared imaging from helicopters spotted movement under the boat tarp where there shouldn't have been movement.

Residents heard the gun volleys going off amid an enormous law enforcement action led by heavily armored ATF and FBI teams that appeared to have the college student cornered after he slipped the leash on foot last night.

From what can be gleaned, the 19-year-old Cambridge resident, who moved to the U.S. 10 years ago as a child, had managed to vanish today on foot. In a day of high Hollywood drama, police on scanners had been endeavoring to keep the suspect from reaching the river, when he got pinned under a boat wintering in a backyard.

He was last seen last night driving off alone after his brother was shot. The two had led the police on a wild chase, tossing explosives in their wake at police in pursuit.

The massive police presence did not stop authorities from calling off the stay-at-home order, bizarrely. Within minutes of the end of the press conference, which ended not far away and was billed (by the governor and the mayor of Boston) as the last scheduled press conference of the day, the younger Tsarnaev was located at last.

Taking him alive was the best that law enforcement authorities could've hoped for. Following the furious fire fight last night, time was not on his side. He is being transported to Mount Auburn Hospital in Cambridge.