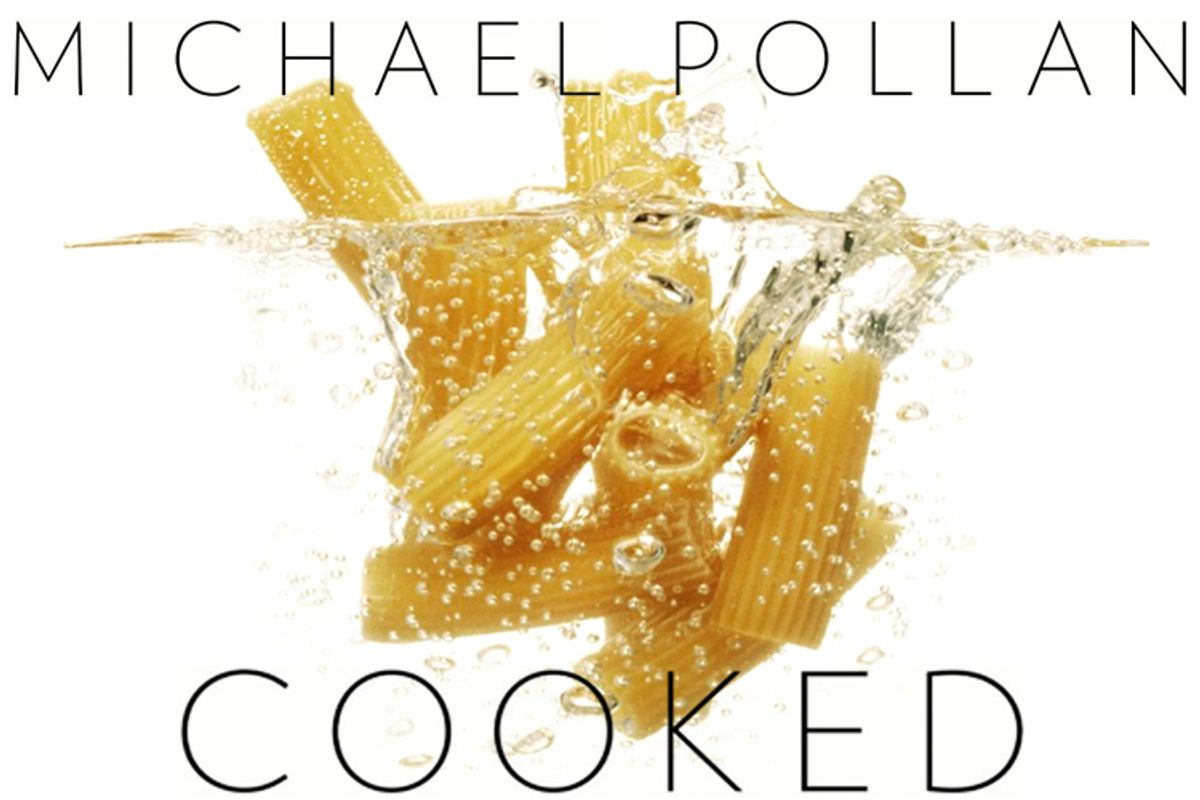 Much food writing is little more than a gaseous substance that collects around recipes and advice. I like to cook and make most of my own meals, but I have no patience for the touchstones of foodie literature, like M.F.K. Fisher, with her preening sensuality, or the imperious fussiness of Richard Olney. Nigella Lawson's phone-sex cooing makes me grind my teeth. Just cut the mystification and razzamatazz, and tell me how to make a decent lentil soup, already! While we're at it, I also hate celebrity chefs and rhapsodic restaurant reviews. Especially during a week like the one we've just had, most food writing manifests a serious disorder of perspective, and its perpetrators come across as more navel-gazing and trivia-obsessed than the most self-involved memoirist.

Apart from flashing my curmudgeon credentials, I'm trying to say that in this department, my bar is set pretty high. There are three food writers I will listen to. Two are true cooks (not chefs): the peerless Mark Bittman, who understands what does and does not matter about how we cook and eat, and Martha Stewart, who -- say what you will! -- taught me everything I know about baking. (Julia Child seems delightfully down-to-earth, but I'm not very interested in French cooking.)

The third writer, Michael Pollan, is primarily a gardener, and perhaps that's what saves him from the myopia so prevalent among food journalists. Gardeners are obliged to see their immediate environment in terms of large systems: weather, wind, soil chemistry, insect and animal life, the seasons, and so on. There's little downtown glamour in weeding or battling cutworms. Gardeners are also (obviously) required to get their hands dirty, so when Pollan makes the case against factory-farmed beef in "The Omnivore's Dilemma," he does it by reporting from inside a paddock where the unfortunate animals live.

However, Pollan didn't think of himself as a cook when he wrote that bestseller. His effort to deepen his understanding of the process of turning food into meals is the subject of his latest book, "Cooked: A Natural History of Transformation." I wish I could say "Cooked" is entirely free of moments of flabby philosophizing ("Isn't it always precisely when we are most at risk of floating away on the sea of our own inventions and conceits that we seem to row our way back to the firm shore that is nature?"), but they are rare. Admittedly, the book's thematic structure is also a shade precious. It's divided into four sections according to what the ancients perceived to be the four elements -- fire, water, air and earth -- each attributed to a different cooking method -- grilling, braising and other forms of cooking in liquids, baking and fermentation. As ever, Pollan makes each of these themes the occasion for real thought as well as some energetic reporting.

The first section of "Cooked," the one called "Fire," is the least interesting, largely because its primary focus is barbecue, a subject of too much tedious macho fanaticism. Is there any bore more boring than a barbecue bore? Pollan, fortunately, is aware that the heroic rhetoric surrounding various barbecue legends is fairly ridiculous, and he applies discreet notes of deprecation as needed. "Barbecue is performed disproportionately by self-dramatizing men," he remarks while mocking his own, much-boasted "special talent for determining the doneness of a chunk of grilled meat." Yet, his recognition of the primal yearnings lying behind the barbecue legendarium leads to such pleasures as his digression on the burning of sacrificial meat in Homeric epics. Smoke, it seems, was the only way to transport these offerings to the gods.

The "Water" section of "Cooked," -- in which Pollan apprentices himself to an Iranian-American woman who teaches him the importance of cooking a soffritto (the mix of chopped aromatic vegetable with which most stews and braises begin) as slowly as possible -- will probably be the most useful to home cooks. That includes Pollan himself, who explains in the book's epilogue that he uses what she taught him often. In contrast to the grandiosity of the pit masters in the preceding section, I especially appreciated Pollan's rumination on chopping onions, the sine qua non of routine culinary tasks. Everyone who cooks has devoted what seems like years of our lives to it. No job could be less fabulous, or more emblematic of what Pollan calls "the 'drudgery' of everyday cooking," as performed by the billions of women who have gotten stuck with it over the years. Yet chopping onions can be made agreeable with the addition of one simple ingredient: a companion, even an idle one, in the kitchen.

It's in "Air" and, especially, "Earth" where "Cooked" really kicks into gear. Pollan teaches himself to bake bread by visiting assorted weird characters who seemingly think about nothing else. (Well, one of them also surfs.) He monitors the exhaustive findings of online bread nerds who traded photos of their starters (a flour paste in which yeast is cultured), comparing "feeding schedules" and reporting results tabulated to the atmospheric humidity. These highly technical discussions reinforced Pollan's perception of baking as "the carpentry of cooking, and I've always gravitated toward pursuits that leave considerably more room for error." What he finds out upon visiting a master, however, is that "success as a baker demanded a certain amount of negative capability -- a willingness to exist amid uncertainty."

How fermentation equates with "Earth" might not be readily apparent, but the real subject of both "Air" and "Earth" are microbes -- the creatures that make possible the rising of bread dough (by the gases they produce while metabolizing sugars), the pickling of sauerkraut, the cheesiness of cheese and, of course, booze. These critters come from all around us, but essentially, they're dirt. Pollan is best when he catches you by surprise and blows your mind, and in these chapters of "Cooked," he reveals not just how much bacteria we eat but how much of our eating is done for us by bacteria. Nine out of 10 cells in the human body aren't actually human cells, and if germophobic readers are distressed to read of cheese being described as an "ecosystem" consider the fact that we, too, are ecosystems, teaming with microbes and fungi that do us many more favors than harms.

Pollan meets "fermentos" who follow an HIV-positive guru with the Pynchonian name of Sandor Katz, a guy who maintains that everyone's health would be greatly improved if we ate more homemade pickles. There's also a nun who specializes in reproducing a famous French cheese under a special dispensation from the board of health. (They permitted her to continue using a goo-encrusted wooden barrel when she demonstrated that E. coli bacteria introduced into it were wiped out by the resident microbes, while the same nasties flourished in the regulation stainless-steel vessels.) "Cheese is all about the dark side of life," the nun tells him, comparing the "cave" where she ages her produce to a "crypt." There's a predictably amusing jaunt through the various fermented dishes that different cultures regard as prized delicacies, even as they gag over those favored by others. The Japanese love natto, "the stringy, mucilaginous ferment of soybeans that is strongly redolent of garbage," and Asians in general cannot believe that Westerners routinely devour deliberately soured milk products.

After this deliciously unsettling walk along the thin line between food and death, the tasty and the disgusting, the ripe and the spoiled, Pollan wraps things up with a defense of home cooking. Maybe it's not the most efficient use of our time, he concedes. But it's good for the soul to be a producer some of the time, rather than just the consumers our corporate overlords want us to be. (They're the same folks who sell frozen peanut butter and jelly sandwiches to harried parents for school lunches.) If you work in symbols and services, or spend your days staring at a screen, you can refresh your spirit with the sight, sound, smell and feel of a real tomato or lemon. You can make a meal for the people you love or even just keep them company while they do it. You don't have to kiss the cook, but by all means come talk to us while we're stuck in here chopping these damn onions.