Two undocumented immigrants woke up in Mexico after being admitted to a U.S. hospital. They weren't the first 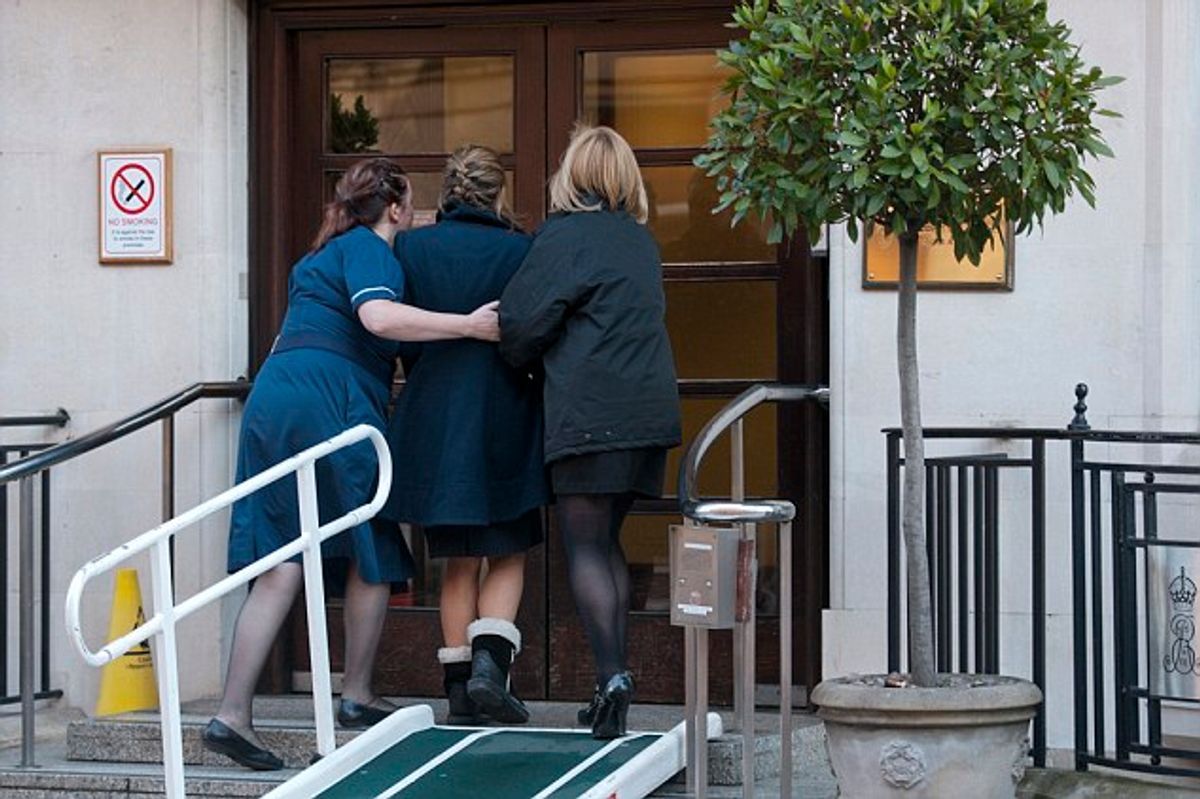 DES MOINES, Iowa (AP) — Days after they were badly hurt in a car accident, Jacinto Cruz and Jose Rodriguez-Saldana lay unconscious in an Iowa hospital while the American health care system weighed what to do with the two immigrants from Mexico.

The men had health insurance from jobs at one of the nation’s largest pork producers. But neither had legal permission to live in the U.S., nor was it clear whether their insurance would pay for the long-term rehabilitation they needed.

So Iowa Methodist Medical Center in Des Moines took matters into its own hands: After consulting with the patients’ families, it quietly loaded the two comatose men onto a private jet that flew them back to Mexico, effectively deporting them without consulting any court or federal agency.

When the men awoke, they were more than 1,800 miles away in a hospital in Veracruz, on the Mexican Gulf Coast.

Hundreds of immigrants who are in the U.S. illegally have taken similar journeys through a little-known removal system run not by the federal government trying to enforce laws but by hospitals seeking to curb high costs. A recent report compiled by immigrant advocacy groups made a rare attempt to determine how many people are sent home, concluding that at least 600 immigrants were removed over a five-year period, though there were likely many more.

In interviews with immigrants, their families, attorneys and advocates, The Associated Press reviewed the obscure process known formally as “medical repatriation,” which allows hospitals to put patients on chartered international flights, often while they are still unconscious. Hospitals typically pay for the flights.

“The problem is it’s all taking place in this unregulated sort of a black hole … and there is no tracking,” said law professor Lori Nessel, director of the Center for Social Justice at Seton Hall Law School, which offers free legal representation to immigrants.

Now advocates for immigrants are concerned that hospitals could soon begin expanding the practice after full implementation of federal health care reform, which will make deep cuts to the payments hospitals receive for taking care of the uninsured.

Health care executives say they are caught between a requirement to accept all patients and a political battle over immigration.

“It really is a Catch-22 for us,” said Dr. Mark Purtle, vice president of Medical Affairs for Iowa Health System, which includes Iowa Methodist Medical Center. “This is the area that the federal government, the state, everybody says we’re not paying for the undocumented.”

Hospitals are legally mandated to care for all patients who need emergency treatment, regardless of citizenship status or ability to pay. But once a patient is stabilized, that funding ceases, along with the requirement to provide care. Many immigrant workers without citizenship are ineligible for Medicaid, the government’s insurance program for the poor and elderly.

That’s why hospitals often try to send those patients to rehabilitation centers and nursing homes back in their home countries.

Civil rights groups say the practice violates U.S. and international laws and unfairly targets one of the nation’s most defenseless populations.

“They don’t have advocates, and they don’t have people who will speak on their behalf,” said Miami attorney John De Leon, who has been arguing such cases for a decade.

Estimating the number of cases is difficult since no government agency or organization keeps track.

The Center for Social Justice and New York Lawyers for the Public Interest have documented at least 600 immigrants who were involuntarily removed in the past five years for medical reasons. The figure is based on data from hospitals, humanitarian organizations, news reports and immigrant advocates who cited specific cases. But the actual number is believed to be significantly higher because many more cases almost certainly go unreported.

Some patients who were sent home subsequently died in hospitals that weren’t equipped to meet their needs. Others suffered lingering medical problems because they never received adequate rehabilitation, the report said.

Gail Montenegro, a spokeswoman for U.S. Immigration and Customs Enforcement, said the agency “plays no role in a health care provider’s private transfer of a patient to his or her country of origin.”

Such transfers “are not the result of federal authority or action,” she said in an email, nor are they considered “removals, deportations or voluntary departures” as defined by the Immigration and Nationality Act.

The two Mexican workers in Iowa came to the U.S. in search of better jobs and found work at Iowa Select Farms, which provided them with medical insurance even though they had no visas or other immigration documents.

Cruz had been here for about six months, Rodriguez-Saldana for a little over a year. The men were returning home from a fishing trip in May 2008 when their car was struck by a semitrailer truck. Both were thrown from the vehicle and suffered serious head injuries.

Insurance paid more than $100,000 for the two men’s emergency treatment. But it was unclear whether the policies would pay for long-term rehabilitation. Two rehabilitation centers refused to take them.

Eleven days after the car crash, the two men were still comatose as they were carried aboard a jet bound for Veracruz, where a hospital had agreed to take them.

Rodriguez-Saldana, now 39, said the Des Moines hospital told his family that he was unlikely to survive and should be sent home.

The hospital “doesn’t really want Mexicans,” he said in a telephone interview with the AP. “They wanted to disconnect me so I could die. They said I couldn’t survive, that I wouldn’t live.”

Hospital officials said they could not discuss the case because of litigation. The men and their families filed a lawsuit in 2010 claiming they received minimal rehabilitative care in Veracruz.

A judge dismissed the lawsuit last year ruling that Iowa Methodist was not to blame for the inadequate care in Veracruz. The courts also found that even though the families of the men may not have consented to their transport to Mexico, they also failed to object to it. An appeals court upheld the dismissal.

Patients are frequently told family members want them to come home. In cases where the patient is unconscious or can’t communicate, relatives are told their loved one wants to return, De Leon said.

Sometimes they’re told the situation is dire, and the patient may die, prompting many grief-stricken relatives to agree to a transfer, he said.

Some hospitals “emotionally extort family members in their home country,” De Leon said. “They make family members back home feel guilty so they can simply put them on a plane and drop them off at the airport.”

In court documents, Iowa hospital officials said they had received permission from Saldana’s parents and Cruz’s long-term partner for the flight to Mexico. Family members deny they gave consent.

There’s no way to know for sure whether the two men would have recovered faster or better in the United States. But the accident left both of them with life-altering disabilities.

Nearly five years later, the 49-year-old Cruz is paralyzed on his left side, the result of damage to his hip and spine. He has difficulty speaking and can’t work.

“I can’t even walk,” he said in a telephone interview, breaking into tears several times. His long-term partner, Belem, said he’s more emotional since the accident.

“He feels bad because he went over there and came back like this,” she said. “Now he can’t work at all. … He cries a lot.”

She works selling food and cleaning houses. Their oldest son, 22, sometimes contributes to the family income.

Rodriguez-Saldana said he has to pay for intensive therapy for his swollen feet and bad circulation. He also said he walks poorly and has difficulty working. He sells home supplies such as kitchen and bath towels and dishes, a business that requires a lot of walking and visiting houses. He often forgets where he lives, but people recognize him on the street and take him home because he’s confused.

The American Hospital Association said it does not have a specific policy governing immigrant removals, and it does not track how many hospitals encounter the issue.

Nessel expects medical removals to increase with implementation of health care reform, which makes many more patients eligible for Medicaid. As a result, the government plans to cut payments to hospitals that care for the uninsured.

Some hospitals call immigration authorities when they receive patients without immigration documentation, but the government rarely responds, Nessel said. Taking custody of the patient would also require the government to assume financial responsibility for care.

Jan Stipe runs the Iowa Methodist department that finds hospitals in patients’ native countries that are willing to take them. The hospital’s goal, she said, is to “get patients back to where their support systems are, their loved ones who will provide the care and the concern that each patient needs.”

The American Medical Association’s Council on Ethical and Judicial Affairs issued a strongly worded directive to doctors in 2009, urging them not to “allow hospital administrators to use their significant power and the current lack of regulations” to send patients to other countries.

Doctors cannot expect hospitals to provide costly uncompensated care to patients indefinitely, the statement said. “But neither should physicians allow hospitals to arbitrarily determine the fate of an uninsured noncitizen immigrant patient.”

Arturo Morales, a Monterrey, Mexico, lawyer who helps Cruz and Rodriguez-Saldana with legal issues, is convinced the men would have been better off staying in Iowa.

“I have no doubt,” he said. “You have a patient who doesn’t have money to pay you. You can’t let them die.”