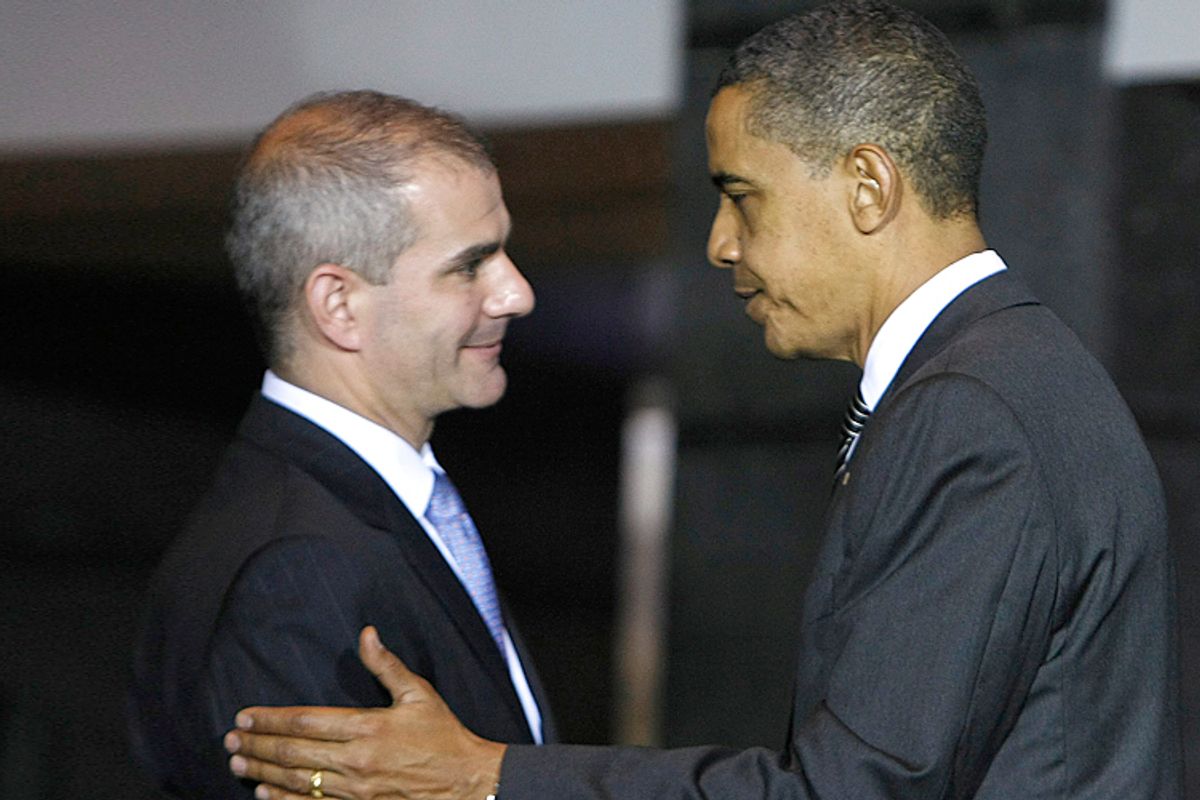 Compared to the near-hysterical reporting on Fox and the mistake-prone efforts at CNN, the handling of the Boston Marathon attack and investigation by NBC (and sister cable channel MSNBC) was straightforward and subdued -- thanks in large part to its experienced reporting team and in-house national security analyst, Michael Leiter. Leiter, who started at NBC last fall, is the former director of the National Counter Terrorism Center (NCTC), the inter-agency situation room in Northern Virginia where the U.S. government synchronizes all of its intelligence analysis. During the week, he was a constant presence on both NBC and MSNBC, providing extensive details about what was likely unfolding on the ground.

On Wednesday’s NBC Nightly News, for example, Brian Williams brought Leiter on to explain how investigators should deal with the evidence they had collected so far, including “tons of imagery” and backpacks, wires and a battery left by the bombers. Would all of that be a “big early help”? Absolutely, replied Leiter. “All of that imagery from the store, from the police and from people, you combine that with the forensic evidence and then the secret intelligence that we are not hearing about from human intelligence sources, cell phone records, things like that,” he said. “And that starts to paint the mosaic from which they can find their suspect.” He provided much of the same information later on MSNBC’s evening broadcasts and over the weekend on the Today Show.

In introducing its analyst, however, NBC failed to mention a crucial piece of information: he is not just a former director of the NCTC, which he ran from 2007 to 2011, but remains an active player in the intelligence contracting industry as a high-ranking executive with Palantir Technologies Inc.

Palantir, which was initially funded by In-Q-Tel, the CIA’s venture capital fund, has become widely known in defense and intelligence circles for providing – and pushing hard, to market - critical technology used by U.S. forces in Iraq and Afghanistan to identify and hunt down terrorist networks that build improvised explosive devices (IEDs). In other words, Leiter's company was initially financed by -- and contracts with -- U.S. intelligence agencies.

Specifically, Palantir sells a powerful line of data-mining and analysis software that maps out human social networks for counter-intelligence purposes. Its customers, which also come from the financial industry, include the FBI, CIA, the U.S. Special Operations Command, the Army, Marines and Air Force, as well as the police departments of New York and Los Angeles – some of the very agencies Leiter is asked to assess on television.

In fact, Palantir may have provided some of the very technology that the government used in its efforts to track and find the Boston bombers – and, experts say, is probably being used by the FBI and other agencies right now in the widening investigation into their past and potential foreign connections.

But, despite the fact that he is commenting on entities to whom he may seek to sell his product (and in some cases already has), Leiter’s dual role has not been fully disclosed. In all of his appearances on NBC, he is introduced as an “analyst” and the former director of the NCTC. That’s how Brian Williams introduces him, and how he was presented on Saturday’s Today Show by Savannah Guthrie. It’s also how he was described during the week by MSNBC hosts Chris Mathews and Al Sharpton, and on Sunday’s Meet the Press with David Gregory. To her credit, MSNBC’s Rachel Maddow is the only NBC host to mention his corporate affiliation, adding to her introduction to him last Thursday that Leiter “works as senior counselor to a security company called Palantir Technologies.” But how many viewers really understand what that entails?

“Leiter represents a company whose fortunes depend on contracts with U.S. intelligence agencies, and he’s discussing related issues on-air,” said Steve Rendell, a senior media analyst with Fairness and Accuracy in Reporting (FAIR), a New York organization that follow the media. “Viewers deserve to know that Leiter’s company has a vested interest in the Boston story.”

Leiter, of course, is not the only NBC analyst with ties to intelligence contractors. Anybody watching NBC and MSNBC over the weekend would have also seen nearly a dozen interviews with Roger Cressey, who was Leiter’s predecessor as NBC’s national security analyst.

Besides being an “NBC analyst” and a “former White House Counter-Terrorism official,” as Cressey was introduced all day Saturday on MSNBC, he also happens to be a Senior Vice President for cybersecurity and counter-terrorism for Booz Allen Hamilton, one of the nation’s largest intelligence contractors with particularly strong ties to the Defense Intelligence Agency (DIA) and the NSA. Yet Cressey’s ties to Booz are never mentioned on the network.

The situation with Leiter and Cressey may call to mind the many pundits who appeared on NBC and other networks during the Iraq War but failed to disclose their links to military contractors or consulting firms engaged in the war. In 2008, the New York Times brought national attention to the issue when it exposed a large group of retired generals who were working for defense contractors in Iraq while appearing on television as "former" military officials. As the Times noted at the time, "Most of the analysts have ties to military contractors vested in the very war policies they are asked to assess on air."

Of course, this is not a direct parallel with Leiter and his ilk: many of the generals described by the Times were also part of a Bush administration PR campaign to quiet criticism of its counterterrorism policies. And the practice is far from an NBC-specific trend: other networks frequently bring in “analysts” who have ties to contractors or consulting groups that aren’t fully disclosed. Michael Hayden, the former director of the National Security Agency, for instance, is often seen on CNN and Fox without viewers knowing that he is a principal with the Chertoff Group, which consults closely with government agencies and corporations on security issues.

But this doesn’t mean viewers shouldn’t know about the analysts’ private agendas.

Booz Allen’s Roger Cressey, like Leiter, has deep experience in national security; as Booz explains on its website, he held “senior cybersecurity and counterterrorism positions” in both the Clinton and Bush administration. And, as might be expected from a senior operative at an intelligence boutique like Booz Allen, Cressey is well-versed in the intricacies of U.S. intelligence.

Speaking to MSNBC’s Alex Witt over the weekend, he stressed the “open and relaxed flow of information” the United States has with Russia, adding that “we always need to understand there are priority targets the counter-terrorism community is always looking at.” And as a company that advises the DIA, he showed intimate knowledge of the High Value Detainee Interrogation Team, made up of CIA, DoD and FBI interrogators, that was about to interview Tsarnaev before he was read his Miranda Rights. “I have a high degree of confidence he’ll give [the team] a lot of information,” Cressey told Witt (the suspect was read the rights on Monday, after he admitted to the bombing).

Also on Saturday, during an appearance with Savannah Guthrie on the Today Show, Leiter also subtly backed the decision to temporarily waive Miranda. Guthrie showed him a statement from the Boston police that Tsarnaev’s arrest had brought the case to a close. He admitted that it could be used by a public defender to show there was “no public safety threat,” one of the standards that was used to waive those rights. “But in the light of the circumstances we’ve had, the numerous improvised explosive devices, the huge gunfire, I think the government is going to get a fair amount of latitude here,” he added.

“I think that the FBI will have a very, very strong case even if he says nothing at all, based purely on the surveillance tapes, statements made by witnesses and forensic evidence.” Guthrie agreed, noting that “as Michael pointed out,” the Miranda waiver could “last only a short time.”

What we have here is two supposedly independent “analysts” taking a position on one of the most controversial aspects of the government response to Boston that completely reflects the views of the government agencies – such as the FBI and the CIA – that their companies ultimately serve. Their views, in turn, convinces NBC hosts of the wisdom of the policy, a stance which could easily sway an uncertain public about the legitimacy of the new face of state power that has emerged in the post-9/11 period. That is influence, yet it is not fully disclosed by NBC.

The presence of a contractor such as Leiter on network television can also affect his employer’s marketability. For example, as a direct result of the Tsarnaev brothers’ shocking commando-style attack in Boston, federal and state law enforcement and counter-terrorism agencies are certain to intensify their drive to identify potential criminal networks in American cities and towns – a perfect job for Palantir.

“Their bread and butter is mapping disparate networks in real time,” said a former military intelligence officer who has used Palantir software. Meanwhile, the government’s focus on tracking networks of drug smugglers and human traffickers will be even greater with the massive spending about to flow to the U.S.-Mexican border under the new immigration bill, which includes billions of dollars for additional border security and aims to reduce by 90 percent the number of illegal crossings. That, too, could attract interest in Palantir, and the intelligence techniques Leiter describes, from border agencies like ICE and the DEA.

And then there’s the increased emphasis on protecting U.S. embassies following last September’s violent attack on the U.S. consulate and CIA headquarters in Benghazi, Libya. “If State wants to join this party, what’s the company that has the software to track them?” said the former official. “The more you look, Palantir has a vested interest in it.” About Leiter, he added this: “I do think NBC and other networks could be more transparent about his affiliations.”

It’s also worth noting that the contractors that employ Leiter and Cressey participate in wartime operations in Afghanistan, Yemen and elsewhere that analysts such as Jeremy Scahill argue have actually created more terrorists, thus adding to the problem. Yet Leiter and Cressey are simply presented to NBC’s viewers as former government officials with a deep knowledge base rather than key players in the U.S. intelligence “enterprise,” that drives this endless war.

Neither NBC nor MSNBC would respond to Salon’s inquiries about their analysts’ roles with major contractors and how that might affect what they say on their shows. But, interestingly, NBC’s lack of transparency became a brief topic on social networks over the weekend and even came to the attention of MSNBC’s newest host, Chris Hayes.

On Friday night, after I watched Cressey being interviewed by Hayes during MSNBC’s coverage of the Boston manhunt, I tweeted about Cressey’s affiliation with Booz Allen and argued that it should be “fully disclosed.” Glenn Greenwald, who used to cover national security and civil liberties for Salon and now writes for The Guardian, saw my tweet and posted back, “I agree completely, of course. I wouldn't be surprised if Chris does, too.” He included Hayes on the tweet. That prompted Hayes to respond a few minutes later: “I definitely agree on disclosure.”

So now at least one MSNBC host is aware of Cressey’s Booz Allen connection, and another has identified Leiter as a player in Palantir. That’s a start; but it remains to be seen if the most liberal of the mainstream cable news networks will continue to identify its analysts only as former national security officials when, in fact, they are an integral part of the intelligence contracting industry.