Pictures of people who mock me

For years, strangers have made fun of me for being fat. But I got my power back -- by turning the camera on them 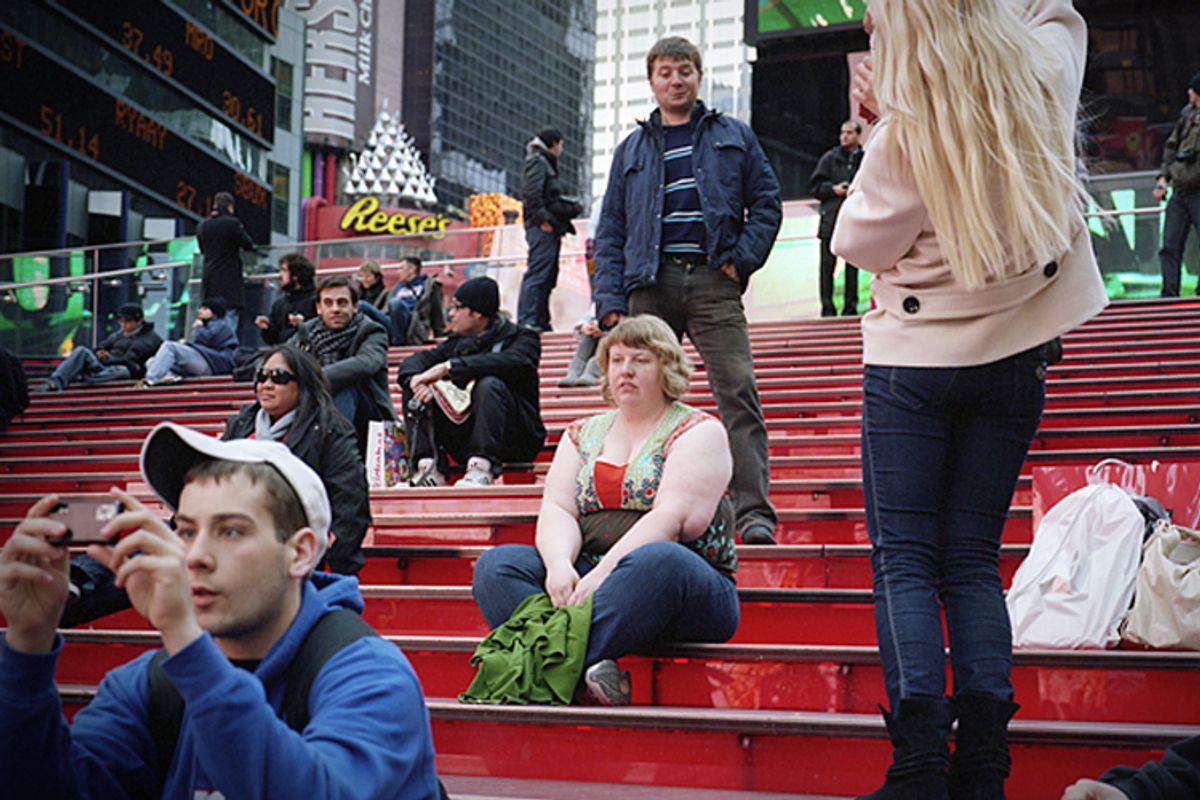 I was traveling with students in Barcelona in the summer of 2011, walking through La Rambla, when I noticed two guys making fun of me. I could see them in the reflection of a mirrored building, making gestures with their hands to suggest how much bigger I was than the thin girl standing next to me, her small waist accentuated by her crop top and cut-off shorts. They painted her figure in the air like an hourglass. Then they painted my shape like the convex curves of a ball. The guys were saying something, too, but there was only one word I could make out: Gorda. Fat woman.

I’ve been hearing comments like this for much all my life. Maybe someone else would have yelled at them, or shrunk inside. But I don’t get upset when this happens.

I pulled out my camera, and set up a shoot.

For about a year, I’d been taking pictures of strangers’ reactions to me in public for a series I called “Wait Watchers.” I was interested in capturing something I already knew firsthand: If the large women in historical art pieces were walking around today, they would be scorned and ridiculed.

So I found a crowded crosswalk farther down La Rambla, used my rangefinder camera to set the exposure and focus of where I would stand, and handed the camera to my assistant. I bought a cup of gelato and began eating it. I’ve learned I get more successful reactions if I am "doing" something.

In my peripheral vision, I saw a teen girl waiting for the signal to cross the street. As I stood there, eating my ice cream, I heard a repetitive "SLAP, SLAP, SLAP" of a hand on skin. I signaled to my assistant to shoot. It was only when I returned home to Memphis and got the film developed that I realized the sound was the girl hitting her belly as she watched me eat. She did this over and over. I have five frames of her with various facial expressions. I called the resulting image “Gelato.” My struggle with my body started after I graduated high school. I played soccer my whole life, sometimes three teams at one time. I never thought about "exercising." I just ran around, knocked people over and kicked the ball hard. When I started college, there was no more soccer and my weight ballooned from a size 7 to a size 14 in weeks.

Eventually, I was diagnosed with hypothyroidism. Though I did go through phases of food restriction and over-exercise, I came to realize that I shouldn’t punish myself for something I can't control.  Self-criticism is a waste of time. I look worse with tons of make up and products in my hair. I am happy when I am not stressed -- so I don't stress.

That doesn’t mean the world is comfortable with how I look. Even though I’m a college professor, who works 12-hour days and eats healthy, even though I have none of the diseases constantly reported in the media as linked to obesity, I’m up against quite a few stereotypes as an overweight blond female artist. I’m constantly fighting strangers’ criticisms that I am lazy and slow-witted, or that I am an overly emotional slob.

I suspect that if I confronted these narrow-minded people, my words would have no effect. So, rather than using the attackers’ actions to beat myself up, I just prove them wrong. The camera gave me my voice. The idea of the “Wait Watchers” series came one day when I was shooting on the bleachers in Times Square. I’d been doing a series of photographs in which I sought out public spaces where I’m most uncomfortable, like swimming pools and restaurants (I always feel like I’m not “allowed" to order fattening food).

Going through the film, I noticed an image with a man standing behind me. There he is, being photographed by a woman who appears to be quite beautiful, standing in the middle of the sensory assault that is Times Square. But at the moment the shutter is released, he is smirking at me. He clearly does not approve. This kind of moment had happened many times. Until that moment, I never thought I could capture it on film.

I embarked on a social experiment: to set up my camera in plain sight and document how the world reacted to me. To create my images, I seek out interesting compositions in public areas.  My goal is to capture a wide range of social groups so I travel as much as I can. I’ve photographed in Spain, Peru, Chicago, New York and Memphis.  My ideal settings have linear compositions or gendered references in signs in the landscape.  I set up my camera in plain sight on a tripod or bench, or an assistant will take hundreds of photographs in several minutes.  I then comb the images to see if I captured a reaction. I do not know what the strangers are thinking when they look at me.  But there is a Henri Cartier-Bresson moment when my action aligns with the composition, the shutter and their gaze that has a critical or questioning element.  Even though they are in front of a camera, they feel they have anonymity because they are crossing behind me.

And I don’t get hurt when I look at the images. I feel like I am reversing the gaze back on to them to reveal their gaze. I’m fine with who I am and don’t need anyone's approval to live my life. I only get angry when I hear someone comment about my weight and the image does not reflect the criticism. That’s frustrating: when I didn’t get the shot.

But since the project started getting media attention, I’ve received hundreds of emails from people thanking me. There are so many people in the world who feel they have the right – no, the obligation -- to criticize someone for the way they look, and to be that recipient of those insults can feel so lonely. I got an email from a 15-year-old girl in Belgium who said my images made her "feel better and not care about what others think and live my life." That made me proud. As for what the images mean, viewers may interpret the images as they see fit.  I’m just trying to start a conversation. Haley Morris-Cafiero is a photographer who lives in Memphis Tennessee. She is an Assistant Professor and Head of Photography at the Memphis College of Art.