Well-off people soon to finally be inconvenienced by sequestration 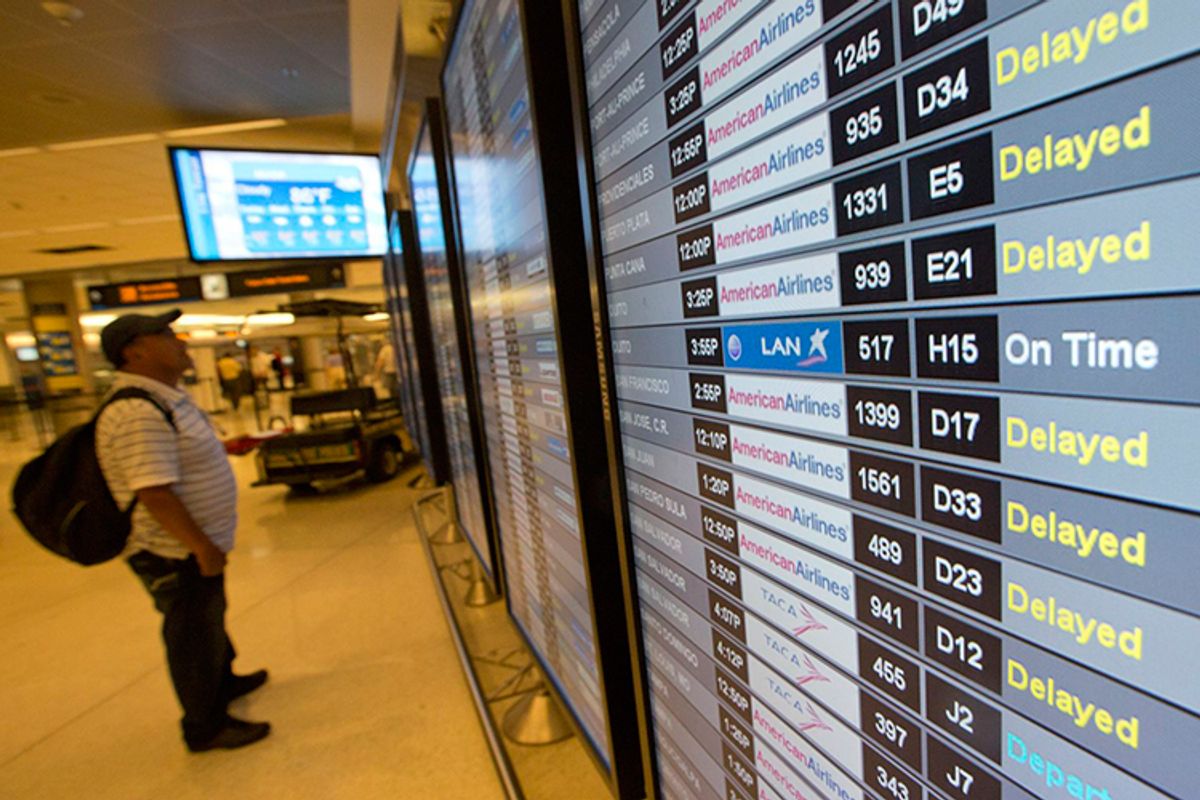 This week, the FAA began keeping 10 percent of America's air-traffic controllers home every day, because of a stupid federal budget argument that turned into a purposefully bad law. Furloughing a bunch of air traffic controllers has a pretty easy-to-predict effect on air travel: It causes delays. Airlines have been sending out automated emails warning travelers to expect as much. The Washington Post yesterday reported on how the first day of furloughs turned out: The New York airports had delays of "one to three hours." By later in the day, those delays had rippled out to airports in the middle of the country. By late Monday night, LAX was still dealing with delays of more than an hour.

I am guessing that over the next few days a lot of Americans are going to hear about these delays, or be personally inconvenienced by them, and think to themselves, wait, the sequester thing is still happening? Well, yes, it is, because so far it hasn't been that bad, for certain Americans. Other Americans, though, have been aware of the cuts since they went into effect.

Thus far, many of the people directly affected by sequestration cuts have been the sort of people whose desires and policy preferences are easily ignored by our political institutions. Larry Bartels has shown that politicians are quite responsive to the views of their rich constituents, but not particularly concerned with anyone else. "The views of middle-class constituents matter rather less, while the views of constituents in the bottom third of the income distribution have no apparent effect on their senators’ roll call votes." Martin Gilens has found basically the same thing.

So far, the sequestration cuts have been particularly hard on people who rely on food pantries and Head Start and Meals on Wheels and unemployment benefits, along with more middle-income government employees and contractors. (And a bunch of scientists, but no one listens to scientists unless they're building death rays or something.) For rich people, the most inconvenient thing about the sequestration thus far has been trying to figure out why it caused the president to threaten to drone Bob Woodward that one time.

That is going to change, once flights everywhere -- but especially out of the Northeast -- are suddenly being delayed and canceled all the time, for no good reason. For a really dumb, easily fixable reason, in fact. (And no, we don't need to "fix" this with a "balance" of cuts and tax hikes, we just need to not do the sequestration. Just repeal it! Super-simple. Then have your idiotic Grand Bargain Budget Showdown.)

So Congress may feel a bit more urgency, then, about addressing the sequestration cuts. (Pundits and journalists, too, may start treating them more seriously.) The DCA-LGA shuttle is at risk.

Not that the inconveniencing of the usually convenienced will cause an immediate sensible end to sequestration cuts. The defense cuts were supposed to ensure that right-wingers hated this, and that didn't work. A lot of people are pretty committed to this weird showdown between the president and House Republicans. And delays and flight cancellations may make a certain type of conservative more committed to mass austerity.

There are certain Simpsony-Bowlesy people who believe quite strongly that the United States will -- must -- pay for the sin of Debt, by self-imposed austerity or by "becoming Greece." Plenty of right-wingers already believe a sort of millenarism-via-Drudge in which the United States is already Greece, or some other failed state on the verge of collapse. Mass airport congestion will only nurture that pleasant feeling of inevitable, deserved decline. (This is related to the common elite opinion that mass unemployment is a sign of a country "taking its medicine.") For some, the worse things get in America, the more evidence it is that we need to make things worse.

So, if your flight gets canceled sometime soon because a bunch of knuckleheads in Congress don't know how sovereign debt works, just be grateful you're not a Medicare cancer patient. (Unless you are one, too.)