In case you were hoping for the new incarnation to be smarter, CNN is talking to Newt Gingrich and Stephanie Cutter 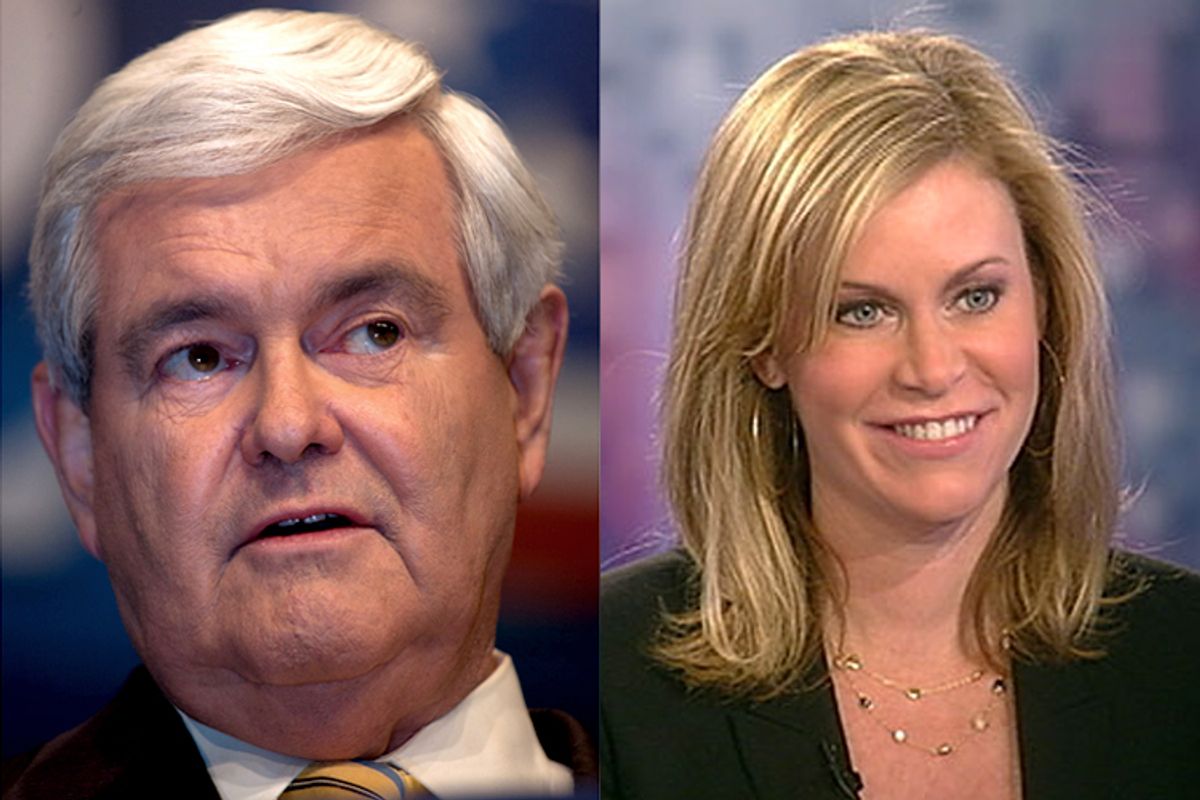 CNN would like you to know that under Jeff Zucker's leadership, it will continue being as CNN-y as possible. That's the message I'm getting from the report that the struggling cable news channel is planning to relaunch political shouting program "Crossfire" and is "in talks" with Newt Gingrich and Stephanie Cutter. Gingrich! Finally, Lincoln-Douglas-style "Crossfire."

This is at this point pretty thin. "Talks" doesn't mean much. Gingrich and Cutter might be part of a whole bench of hosts. But it does suggest that CNN is going about a "Crossfire" launch in just about the worst way possible. Those hoping for a smarter version of the old show will definitely be disappointed.

Stephanie Cutter has spent her entire career as a campaign flack. Her job has been, for years, to spin reporters. (This job leads to becoming a political news media professional strangely often.) Regardless of her intelligence and her ability to speak extemporaneously on camera, she has never demonstrated an ability to be an interesting, independent thinker, and it is fair to predict that as a TV pundit she'd be representing "The Democratic Party" and not "liberalism."

Gingrich was a Republican politician as of a few months ago (and he still might be again someday). In Congress he was a would-be revolutionary right-winger who left office loathed by everyone on both sides of the aisle. In private life he's been allowed to pretend to be a lightweight conservative public intellectual. His specialty since leaving office has been making money, with a mess of consulting companies and nonprofits and "educational" businesses. (He lost much of that empire in 2012, when he somehow convinced himself he was a serious presidential candidate.) He fancies himself as an ideas man, because he wildly flits from TED-ish Big Idea to Big Idea, picking up and abandoning technocratic proposals for major problems more or less at random. But he is essentially a buffoon, and one respected as a public thinker or even public figure by approximately no one.

These two don't give one much hope for a relaunched "Crossfire."

The popular, Jon Stewart argument against "Crossfire" was that it was just insincere, theatrical argument for the sake of argument. But "Crossfire's" sin wasn't strictly that it had arguments, it was that the arguments were more often than not shallow and partisan. That's what happens when you hire party hacks. It's true that watching the show made you dumber, but it didn't have to.

When you hire ideological journalists or passionate commentators, from a background other than electoral politics for one party, you tend to get better debate. If a host or guest is more committed to the success of their ideas and ideals than the success of their party, the conversation will be better, even if that host or guest is a lifelong party line voter.  Politicians and their former flacks and consultants and strategists, though, are seldom remotely interesting thinkers.

The clip illustrates the huge flaws in the "Crossfire" model even when it was sort of working: It's four dudes shouting at each other and making necessarily shallow arguments about current "controversies." Major public policy issues are treated with the same weight as sillier political debates.

But while it's shallow, it's not necessarily partisan. Kinsley and his longtime co-host Pat Buchanan are both smart guys who don't subscribe to party orthodoxy. (In Buchanan's case not subscribing to party orthodoxy does basically mean being a ridiculous Dixiecrat anachronism.) Novak wasn't as unorthodox but he was definitely more a conservative than a Republican. (I recall a slightly bizarre 2007 Ron Paul endorsement.) Limbaugh and Lassiter's agendas are entertainment and provocation.

"Crossfire's" hosts devolved, over the years. Kinsley and Buchanan made way for political strategists like James Carville and Mary Matalin. But some people remember it fondly because for a time the hosts were interesting and smart. Cutter is adept with talking points and Gingrich is in love with the sound of his own voice. But I wouldn't care to read a column from either so I don't particularly need to see them arguing on TV.

Cable news has become quite different since "Crossfire" ended. Fox made "Crossfire" irrelevant by parodying its model on "Hannity & Colmes" and then ditching Colmes in favor of a network-wide interchangeable cast of weak, milquetoast liberals and pseudo-liberals, for its Alpha Male ultra-conservatives to use as punching bags. MSNBC belatedly struck gold with a politer model in which reasonable hosts, some of whom are unabashed lefties, host non-argumentative discussions with guests representing a wider ideological (and ethnic and professional) range than cable news usually presents. (There is also still Chris Matthews and Larry O'Donnell shouting with and at people.) Those proved to be more popular models of political talking shows. CNN is constitutionally unable to imitate either, unfortunately. Still, the solution is pretty easy: Just don't relaunch "Crossfire."

CNN should abandon the political shouting-show model to those two other channels, the ones that thrive on cheap talking-head programming, and just do news. National news! Local news! Entertainment news and sports news and lurid crime news and trashy celebrity news. Investigative journalism and newsmagazines and documentaries. Environmental news and international news and funny animal news. Anything but another show where an equal number of Democrats and Republicans talk at each other. CNN should sometimes be "Today" and sometimes be "Frontline" and sometimes be "Entertainment Tonight" and sometimes be "VICE" and sometimes (often) be the BBC World Service (or CNN International, at the least). It doesn't need to be "Crossfire" again. No one wants that. The sort of people who do already have two other cable channels to watch.

Alas, it looks like CNN still believes its best bet is to precisely split the middle, and be dumber and shoutier than MSNBC but more balanced than Fox.