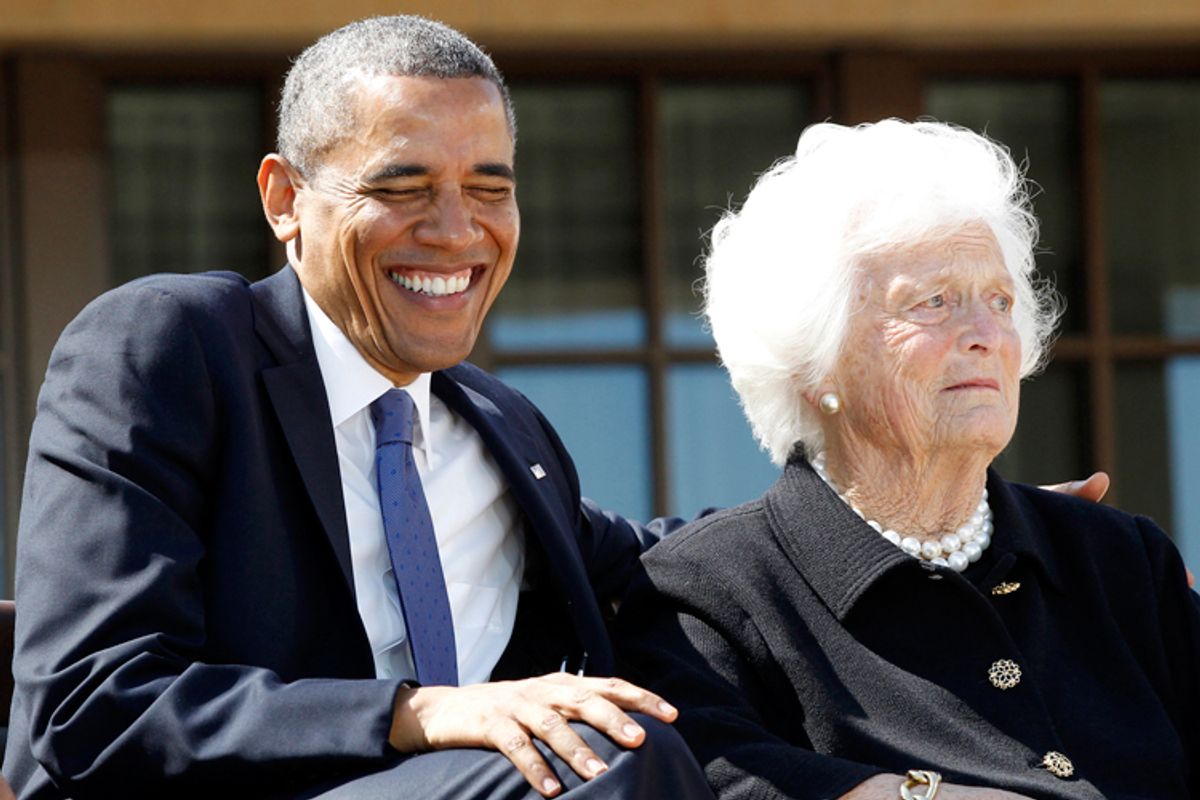 We heard it repeatedly during the 2012 campaign and its sad aftermath for the GOP: The party’s silver lining was its “deep bench” of 2016 contenders. Paul Ryan and Chris Christie, Marco Rubio and Rand Paul, Bobby Jindal and Scott Walker -- they were younger than Mitt Romney; they brought racial and ethnic diversity; Christie would bring a little ideological diversity, too, coming from the almost extinct wing of Northeastern Republicans. 2016 promised to be a bracing, exciting battle for the new soul of the party.

So I’ve found it a sad commentary on GOP rebuilding that there’s been so much talk this week about the likelihood and desirability of a Jeb Bush candidacy. And apparently one influential Republican, his mother, Barbara, agrees with me.

“He’s by far the best-qualified man, but no,” the former first lady told NBC’s Matt Lauer when he asked if she wanted her son, the former Florida governor, to run for president. “I really don’t. I think it’s a great country. There are a lot of great families, and it’s not just four families, or whatever. There are other people out there that are very qualified. We’ve had enough Bushes.”

Bush’s remark about “more than four families” is also being interpreted as a knock against Hillary Clinton, and it may well be. I don’t like comparisons of the Bush and Clinton “dynasties” – the Bushes are the ultimate example of establishment wealth and power, with a senator (Bush Sr.’s father, Prescott), two governors and three presidents in the lineage (Barbara herself is a descendant of Franklin Pierce), while the Clintons are middle-class people who worked for everything they’ve achieved. But it’s possible voters will agree with Barbara Bush and decide they don’t want a familiar family name leading either party, and that’s their right.

Bush, of course, is known for her candor and her sharp tongue, which first became famous when she said 1984 Democratic vice-presidential nominee Geraldine Ferraro, running against her husband, was something that “rhymed with rich,” and she didn’t mean “snitch.” But she’s also had moments of candor admired by liberals. Once a public supporter of Planned Parenthood, she played down her pro-choice politics once her husband joined Ronald Reagan’s ticket. Still, even as Bush fought a tough battle for reelection in 1992, the first lady opposed the addition of new antiabortion language in the GOP platform, calling abortion a “personal thing” that had no place in politics.

"I'm not being outspoken or pro or con abortion," she told reporters. "I'm saying abortion should not be in there, either pro or con. The personal things should be left out of, in my opinion, platforms and conventions."

And in 2010, she also gave her party some advice about who not to nominate in the next presidential cycle, dismissing the potential candidacy of Sarah Palin in an interview with CNN’s Larry King. "I sat next to her once. Thought she was beautiful," Bush said of Palin. "And she's very happy in Alaska, and I hope she'll stay there." (Palin shot back that Bush was among the party “blue-bloods, who want to pick and choose their winners instead of allowing competition.”)

Well, now the blue-blood is weighing in against another blue-blood, her own son (reputed to be her favorite). She was right about Palin, and she is right about Jeb. Let’s hope he listens to her.