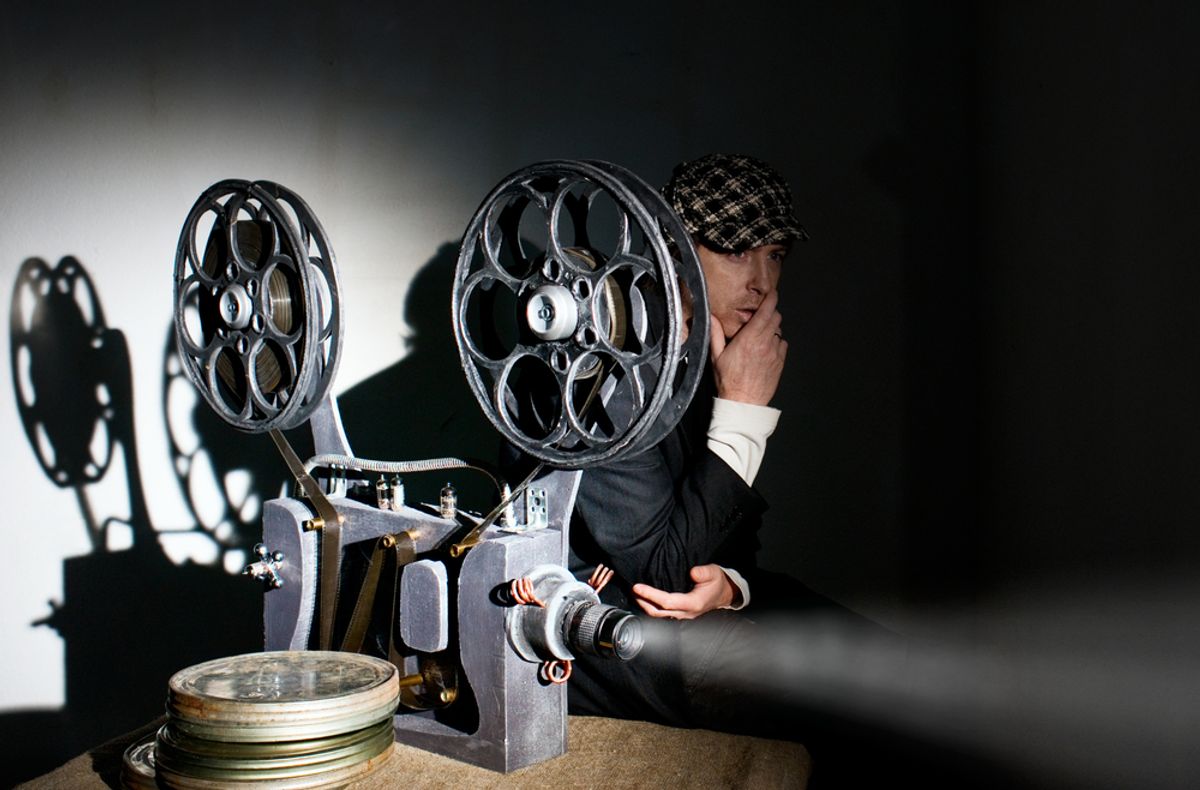 I DON'T KNOW WHAT I was expecting from Owen King’s debut novel, Double Feature, but I wasn’t expecting to laugh so hard that my eyebrows hurt. But I did. I laughed that hard. I’m not sure why the impact on my eyebrows was so immediate and intense. Maybe because they’d jump up at certain scenes in the novel and then ride the rising waves shooting from the lower half of my face.

Double Feature is a many-headed comic monster. Its concerns are varied; it’s hilarious first and foremost, but it’s also a heartbreaking and poignant meditation on the vagaries of art. The sweep of the novel is epic: we jump around within a 40-year window, though most of the action is set between 2002 and 2003 and in 2011. Our main character is Sam Dolan, serious film student, aiming — when we first see him — to turn a script he’s written, Who We Are, into a meaningful indie film. Who We Are is about a group of students at Russell College in upstate New York who “age at a super-accelerated rate, encapsulating all four years of college in a single Spring Festival, the annual daylong bacchanalia that was the inebriated topper on every red-blooded Russell undergraduate’s year.” The script is, Sam thinks, a “lyric piece” that speaks to the “mad, arrested quality of those four years and, in general, of what a desperate thing it was to be young and free and American.”

Sam has a terse relationship with his B-movie actor father, Booth Dolan, star of cult hits like New Roman Empire, Hard Mommies, and Devil of the Acropolis. Sam dismisses not only his father’s work but his father as a whole: he sees him as a pathetic huckster, betrayer of him and his mother, a hokey hack with few redeeming qualities. No wonder that Booth’s critique of his script — which he has discovered by riffling through Sam’s laptop bag — agitates the younger Dolan. He cannot imagine taking advice from a washed-up, Orson Welles­ knockoff.

When Sam begins work on Who We Are, with the assistance of rich kid assistant director Brooks Hartwig, Jr. and Brooklyn-based production company Bummer City, we think the novel has found its main thread of action. And, for the first hundred or so pages, it has. Sam casts the film, convincing serious actor Rick Savini to play an important part, and begins shooting. King compresses the filming of Who We Are into a 13-page paragraph meant to mimic the hectic and exhausting nature of filmmaking. In that regard, it works. It’s also one of the only moments in the book when I felt disoriented and sleepy, probably King’s desired effect, but still a bit of drag.

The novel takes an unexpected turn at the end of its first movement. Brooks, who Sam has unabashedly used for his money and who is also known to be quite strange (his short for the intermediate film class they took together was about a taxidermist bullied into committing suicide by his collection of animal heads), has hijacked Who We Are spectacularly. He’s burned the film and all the equipment. He’s even destroyed Sam’s backups. When Sam gets in touch with Bummer City, he’s relieved to find that Brooks has at least delivered a final cut to them. What Sam discovers when he finally views the film is that Brooks has made his own cut and split the directing credit with Sam. He’s used less than half of Sam’s original footage and has built a second narrative around it, about a well hung satyr who lives in the woods near the college and furiously masturbates and screws trees. What Brooks has done to Sam — as any artist who has had his or her work destroyed can attest — is terrifying and, yet, also darkly funny. Sam, crushed, throws the film away (or so he thinks) and begins his new, ruined life.

And this is only the first fourth of the novel. I wasn’t sure where King would take us from here, and I was a bit jarred by the quick shift back to Allie, Sam’s mother, and her new beau, Booth, on the set of New Roman Empire in 1969, fearing it would signal a back-and-forth structure that seemed too easy. But that doesn’t happen. Nothing’s too easy here. Three of the novel’s four parts have sections set in the present and past, but King balances everything well and, aside from a few shifts to Allie’s point of view in the past and a brief glimpse into Brooks’s psychotic mind, the novel remains Sam’s. When we next see him, eight years after Brooks has destroyed his film, he is working as a wedding videographer.

Filming a Brooklyn wedding of two academics, officiated by a poet, we are introduced to the older, sadder Sam. He still has phone sex (and occasionally sex sex) with his college girlfriend, Polly, who has now married a thunder-thighed ex-Yankee catcher named Jo-Jo Knecht and has a baby named Rainer. He is concerned for his half-sister, Mina, 17, fearing that she’s going to be suckered into sex by her older boyfriend (neither Sam nor Mina realize her boyfriend is gay). He lives with his college pal Wesley, who is Internet-famous for his snarky reviews of everything from E.T. to microbrews and has compiled a list of 75 things that cause unnecessary fatigue (“#59: Grapes with seeds” is my favorite). It’s here that the novel kicks into high comic gear.

Sam dwells on a Jack Gilbert poem that the old poet reads at the service: “We must have / the stubbornness to accept our gladness in the ruthless / furnace of the world. To make injustice the only measure of our attention is to praise the Devil.” These lines cause him to spiral into a panic, “the words […] fluttering in his head, held there in some mental updraft.” In the throes of a meltdown, he meets Tess and they bond over their mutual love of actor John Cazale and their mutual hatred of the Tea Party (“I’ve had it up to my ears with old white people who wear cell phones on belt clips,” Tess says).

Sam is excited by Tess, but also unnerved by her. “I’m not that nice a person,” she tells him, which shatters Sam. “Only nice people said they weren’t nice,” he thinks, and then he’s suddenly frightened of her. In one of the funniest scenes in the novel, he escapes the wedding through a bathroom window by stepping on the back of the old poet who officiated the wedding. The poet, followed by “the smell of hot compost,” has just clogged one of the toilets, and collapses to the floor where the “sinister toilet water” pools around him.

Finding a nameless hipster bar with three-dollar PBRs a few blocks away, Sam stumbles in, hoping to forget Tess. Instead, what he finds is Who We Are showing on a big screen to an audience of hipsters dressed in satyr costumes. We learn of the film’s complicated history: the only copy was ostensibly rescued from the pavement where Sam let it fall after half-heartedly throwing it in the direction of a trash can. It’s gone on to be a cult hit — a film like Tommy Wiseau’s The Room — that plays to “packed, goofy, inebriated houses.” Sam had his name removed from the credits by Bummer City, but he still receives residual checks that he never cashes, refusing to profit from Brooks’s vandalized version of his vision.

It’s a great irony — the son of a B-movie actor, trying to make serious art, has his precious film transformed into the era’s greatest camp sensation — and, like so much of King’s wonderful novel, it manages to be sad and funny. Sam isn’t a despicable character. He isn’t pathetic. He’s just an artist who has failed to do what he intended to do. Struggling along, disappointed, he’s forced to confront so much he’s been unable to confront: the destruction and second life of Who We Are, boisterous Booth, his illicit relationship with Polly, his stunted adolescence.

Later in the novel, in a flashback to 1991, Booth visits Sam’s class on Career Day. Sam has dreaded this moment, fearing that Booth will embarrass him. But Booth slaps prosthetic noses on Sam and his fellow students and introduces them to the wonders of acting. He tells the class that they are “living in the first movie of the double feature of [their lives]” and that their adult existence is the second feature. “Make believe,” he says. “It is important. Your second feature will start soon.”

Sam, in his 30s now, doesn’t seem to be in his second feature yet. He’s incapable of real friendship and real love. When Mina forces Booth back into his life, Sam is surprised (and appalled) to see that Booth has changed. Aiming to be a responsible and responsive human being, Booth does good deeds and hopes to reconnect with his son. Sam is ambivalent. The father-son stuff here is never sentimental or simple. When Mina tells Sam that Booth is dying of stomach cancer, we’re relieved to find out that it’s a joke. In that way, Double Feature is an affront to the sad indie movies it often resembles and more often mocks. King always manages to twist us away from the predictable, from what we’ve seen before, favoring the dark humor of something like the Coen Brothers’ A Serious Man to the twee blandness of countless Sundance darlings.

Talking about Antonioni’s Blow-Up with a young woman named Bea in the college town where Booth lives, Sam is trying to sell her on the greatness of the film. He says: “The end is that the photographer, he finds himself by these tennis courts. A group of mimes happens along. And they all start playing mime tennis.” Disgruntled, Bea doesn’t bite. “That’s it? Mimes playing tennis?” she says. When Sam explains that the photographer hears the balls — that it’s an “acquiescence to the unknown” — Bea fake-barfs. She explains how and why it’s a cop-out. She says: “Mimes are everything that is wrong with everything.” It’s a lesson that Sam carries with him.

The finale has quite a bit in common with Wes Anderson’s The Royal Tenenbaums, especially in its attempt to rally every major and minor character in one place and in its prominent use of a screwball car crash. If it doesn’t feel real enough for you, you’ve probably been reading the book the wrong way. King uses an exaggerated reality, much like Anderson’s, to meditate on generosity and decency, youth and age, fathers and sons, disappointment and loss, and the making of art (in the least pretentious way imaginable). In a flashback scene, Sam’s mother asks him if everything always has to be so serious. “Does what have to be so serious?” he asks. She responds: “Oh, art and everything. You have a very serious outlook.” Sam says he doesn’t know. King writes: “[But] really, he thought that it did. There was the fake and there was the genuine; the former was abhorrent, and the latter was everything.” For Sam, it seems, his second feature can only start when he learns to lighten up and accept his gladness.