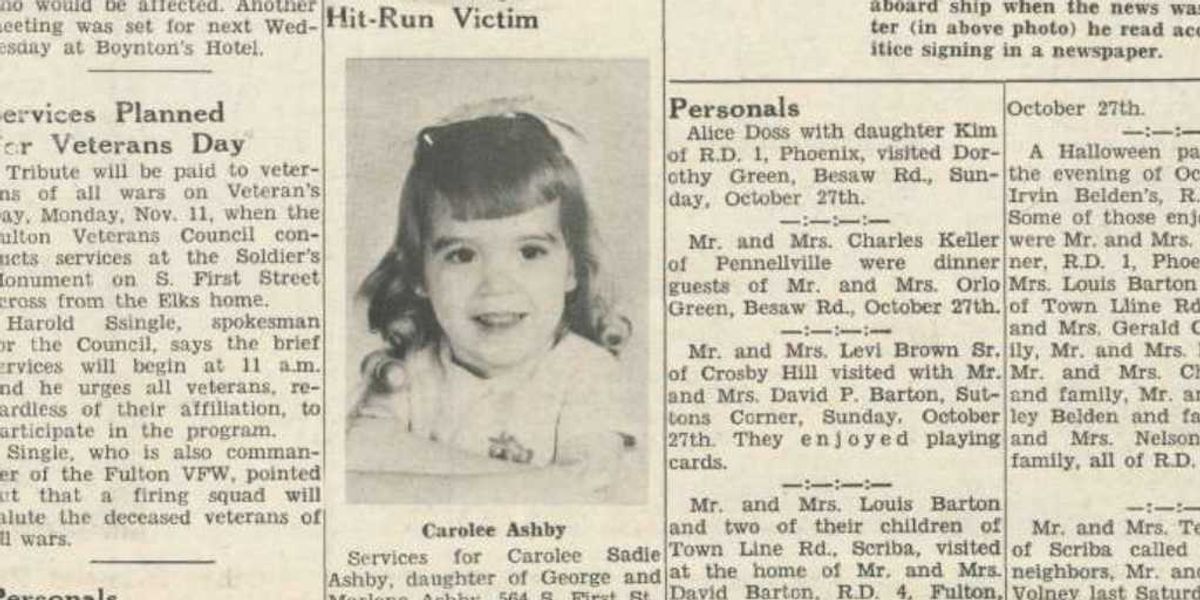 Some wounds never heal – even after 45 years.

That's what the family of Carolee Sadie Ashby is finding out after her 1968 hit-and-run death was solved with the help of a Facebook post. Now, the family of the 4-year-old girl in upstate New York is grieving—online and off-—as they come to grips with the fact that nothing will be done to punish the drunk driver responsible for the death.

On Wednesday, the Fulton Police Department announced that Douglas Parkhurst, 62, of Oswego was the person who struck and killed Carolee on Halloween night nearly half a century ago. The Associated Press reported that Carolee was walking with her sister and cousin after going to the store to buy candles when Parkhurst failed to stop for the children at an intersection. Parkhurst had been drinking that night and was questioned by police but denied ever seeing the girl or hitting her. The case went unsolved for years, but police continued to track down leads.

Early last year, retired Lt. Russ Johnson posted details about the case on a Facebook page dedicated to local history. There, it was seen by a woman who lived in the area in 1968 but had since moved to Florida. She contacted police and told them that a member Parkhurst's family approached her soon after the accident asking her to tell police that they were with the driver on Halloween night. She rejected the plan and never found out why they wanted her to talk to the police, but in the back of her mind, suspected it had something to do with Carolee's death.

With new information, police once again opened the case and questioned Parkhurst. This time, he admitted that he was drinking and driving that night in 1968 when Carolee was hit. Although he has admitted to the crime, charges can not be brought against him because the statute of limitations has expired.

The news was greeted with mixed feelings by members of the family on a Facebook page set up to discuss the little girl that was killed 45 years ago.

"We, the family of Carolee Sadie Ashby, would like to thank Russ Johnson and the present Fulton City PD for pursuing this case knowing there could never be a conviction and solving this for the family giving us some closure,” wrote Amy Mccann Kush.

“Praise be to God for answered prayer. Praise God too for Russ Johnson who took upon himself to find the driver who hit Carolee. His compassion, tireless work and commitment to Carolee and her family is what made this day possible,” wrote Joanie Woolson.

Many of the page's more than 300 members expressed sympathy over the death and frustration that little could be done to bring Parkhurst to justice. Some members even used the Facebook group to discuss the possibility of writing legislators to change laws in regards to death and the statute of limitations.

But then, as one man asked: "What is the Statute of Limitations for grief, sorrow and loss of a loved one"?