When maps are art 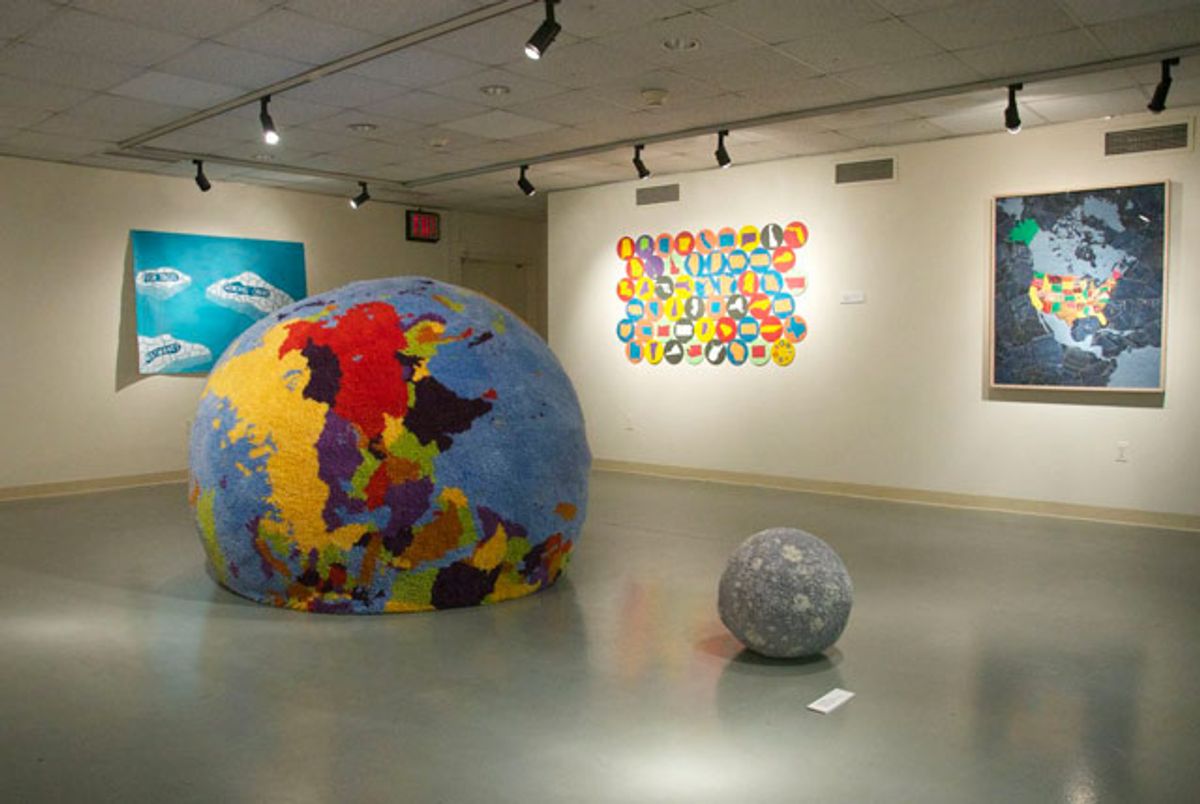 Installation view, “Contemporary Cartographies” at Lehmann College Art Gallery, with Charley Friedman’s “Carpet World/Carpet Moon” in the center (all photos by the author for Hyperallergic)
--

When I was a kid, my father kept a dog-eared street map of the Dallas metroplex in his truck’s glove compartment. As a contractor who spent hours driving each day, this atlas was his North Star — a point of reference for navigating the city’s chaotic, concrete sprawl. Today, the cartographic tradition that his homely map belonged to — spanning millenniums from the early Phoenicians to Amerigo Vespucci and Lewis and Clark — is rapidly changing. I now find my way through New York by following a tiny, triangular point on an iPhone screen. In an age of new technology, information, and globalization, maps are no longer mere objects, and they increasingly represent immaterial worlds. This shifting understanding of time and space is reflected in Contemporary Cartographies, a group show at CUNY’s Lehman College Art Gallery in the Bronx.

The 20-odd works in the exhibition, produced by 17 artists and spread over three rooms, feel almost like religious icons in that they invite contemplation about ideas greater than any of them alone. Paula Scher’s 2007 silkscreen print “The United States (Red)” obsessively inscribes every small American town and city onto a 50-states map. The strong identification with place that it provokes seems to be waning now, in the aftermath of the housing crisis, as younger Americans who reject the idea of a home as an investment become less likely to put down roots. Doug Beube’sErosion series (2009) deconstructs and layers real vintage maps to create a jumbled and nearly unreadable world geography, alluding to the rise of a global village that muddies social and political borders.

There’s a telling moment in the movie The Truman Show when the young, bright-eyed protagonist announces to his elementary school class that he wants to be an explorer. His wizened, matronly teacher points to the wall map and informs the boy, “You’re too late. There’s nothing left to explore!” Perhaps for this reason, the majority of artists in the exhibition here do not work with traditional maps but instead explore conceptual cartographies. Dannielle Tegeder’s “Impossible City: Neighborhoods, Lawnfiellisonia Wakmelongwood, Highbedhavenrose, Trempointwood and Throgville Island” is a road map of the internet installed directly onto the gallery wall with black industrial paint and colored pencils. Based on invented data, it playfully visualizes the virtual infrastructure that has become so well-traveled in the Information Age.

Memory is the landscape of Sage Dawson’s “Timeline,” a 5-by-17-foot lithograph that unfurls from the gallery wall onto the floor like a carpet, inviting the viewer to ascend into a metaphysical environment. Though the use of Dawson’s own hair in mapping roadways and intersections suggests a personal history, the absence of recognizable landmarks allows the viewer to transpose his own experiences onto the work. Similarly, Simonetta Moro’s colorful drawings on translucent mylar, “Imaginary Maps #1” and “#2,” act as symbols through which the viewer can contemplate the landscapes most important to his own life.

The show also includes several humorous works that offer a mental break. Dalia Elsayed’s psychological maps on paper read like ironic, self-deprecating versions of 19th-century phrenology busts. Her “August Landscape” depicts three small islands in a turquoise sea, with route marks leading first from one labeled “Fish Tacos” to “Heatwaves” and finally to “General Chaos.” Looking at Charley Friedman’s “Carpet World/Carpet Moon” — a fluffy, latch-hook earth that sinks irresolutely into the gallery floor as a proportional moon sits nearby — I was tempted to reenact Charlie Chaplin’s comedic globe dance in The Great Dictator.

Why are we so interested in maps? What do they tell us about ourselves and our world? When I look at these works and remember the sense of adventure my father’s atlas once inspired in me, I’m reminded of a passage in Jonathan Safran Foer’s novel Everything Is Illuminated, when the characters have just discovered an 18th-century world map. The narrator tells us:

A map such as that one is worth many hundreds, and as luck will have it, thousands of dollars. But more than this, it is a remembrance of that time before our planet was so small. When this map was made, I thought, you could live without knowing where you were not living.

By delineating the topography and boundaries of the seen and unseen world, maps assure us that nowhere is unreachable and that anywhere is traversable. Rather than limiting possibilities, they expand them. Technology and globalization have made our world feel smaller, but the works in Contemporary Cartographies remind us just how large it really is, and how much more mapping we still have to do.