The Tsarnaevs learned how to make bombs from the Internet. So can anyone. And the problem will only get worse 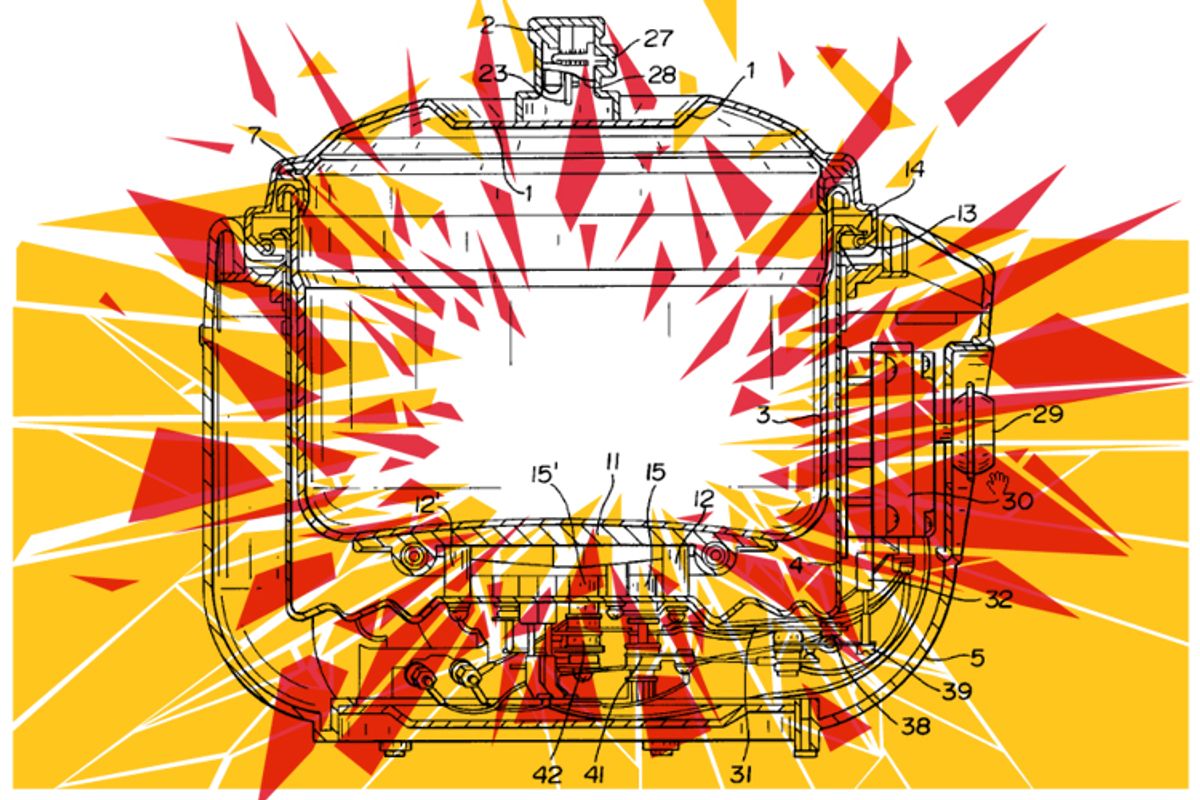 From his hospital bed, Dzhohkar Tsarnaev told investigators that he and his brother learned how to make their pressure cooker bombs from "Make a bomb in the kitchen of your Mom," an article from the al-Qaida-affiliated magazine Inspire, which is easily available online. The news immediately reignited a long-simmering debate about how the United States should confront the problem of access to bomb-making instructions on the Internet. Once again, society is wrestling with the thorny question of how best to balance public safety against the constitutional protection for free speech. What can we do? What should we do?

Somewhat lost in this debate is the fact that the U.S. already did just about the most extreme thing possible. In September 2011, the U.S. government killed the man believed to be most responsible for the publication of the pressure-cooker bomb story. Samir Khan, a Pakistani-American raised in Queens, N.Y., and Charlotte, N.C., was the co-founder and editor of Inspire; the magazine was the crown jewel in his campaign of "media jihad." But barely a year after the publication of the pressure-cooker bomb article, Khan died in a drone attack in Yemen.

It's not clear whether Khan was targeted directly because of his promulgation of bomb-making instructions. The proximate cause of his death was his misfortune in standing next to Anwar al-Awlaki, the radical cleric believed by U.S. intelligence services to play a critical role in planning al-Qaida terrorist acts and the prime target of the drone attack. But whether or not the U.S. government expressly decided to execute Khan is moot. The point is that one cannot imagine a more radical response to the publication of bomb-making instructions than raining drone death from the sky on the person primarily responsible.

And yet, it didn't do any good.

The execution of Samir Kahn didn't prevent the Boston bombings. (Indeed, one could argue that extrajudicial drone assassinations actually provide added motivation for more acts of terrorism aimed at Americans.) For both constitutional and purely practical reasons, we live in a world where access to information on how to do deadly things has never been easier. That's not going to change. In fact, as the technologies available to facilitate ever-more-sophisticated do-it-yourself bomb-making activities, such as 3-D printing, continue to spread, the situation is only going to get worse.

Like it or not, the First Amendment provides strong protection for the act of uploading bomb-making instructions to a website. Lee Tien, a specialist in First Amendment issues at the Electronic Frontier Foundation, says that the Supreme Court has been quite clear about its reluctance to carve out new areas of jurisprudence that would restrict speech. To do so would open up a nasty can of worms. Bomb-making, noted Tien, is basically applied chemistry and engineering. It's extraordinarily difficult to draw a clear legal line between what might be deemed permissible scientific instruction and impermissible blueprints for weapons of mass destruction.

Which is not to say that the U.S. government hasn't tried. The Oklahoma City bombing in 1995 combined with the explosive growth of the Internet to spur a concerted effort to do something about the online availability of bomb-making instructions. In April 1997 a study conducted by the Department of Justice determined that there was a wealth of bomb-making information available online:

Bombmaking information is literally at the fingertips of anyone with access to a home computer equipped with a modem. To demonstrate such availability, a member of the DOJ Committee accessed a single website on the World Wide Web and obtained the titles to over 110 different bombmaking texts, including "Calcium Carbide Bomb," "Jug Bomb," "How To Make a CO2 Bomb," "Cherry Bomb," "Mail Grenade," and "Chemical Fire Bottle." The user could access and print the text of each of the listed titles...

It is readily apparent from our cursory examination that anyone interested in manufacturing a bomb, dangerous weapon or weapon of mass destruction can easily obtain detailed instructions for fabricating and using such a device. Available sources include not only publications from the so called underground press but also manuals written for legitimate purposes, such as military, agricultural, industrial and engineering purposes. Such information is also readily available to anyone with access to a home computer equipped with a modem.

Two months after the publication of the DoJ study, in June 1997, the U.S. Senate unanimously passed an amendment to a Department of Defense spending bill that prohibited the distribution of bomb-making instructions if it could be proven that there was intent to commit "a federal offense or other criminal purpose affecting interstate commerce."

But 16 years later, there is still no shortage of information about bomb-making available on the Internet. It's easy to see why. The requirement that explicit intent to commit or encourage a federal crime be associated with distribution creates a vast loophole. Members of the thriving community of survivalist "preppers," for example, believe that it is simply prudent to prepare for a post-apocalyptic breakdown of society by sharing recipes on how to make C-4 plastic explosives. How is that a crime? Here's something fun to do: Go to Amazon and review the list of books also bought by customers who purchased Ragnar's Big Book Of Homemade Weapons: Building And Keeping Your Arsenal Secure." You will find "The Do-It-Yourself Gunpowder Cookbook," "Ragnar's Homemade Detonators: How to Make 'Em, How to Salvage 'Em, How to Detonate 'Em!," and "U.S. Army Improvised Munitions Handbook."

If you can buy a copy of the "U.S. Army Improvised Munitions Handbook" on Amazon, it's very difficult to see how you could a priori criminalize the act of publishing an article on making pressure-cooker bombs online. In the specific case of Inspire, since it's fairly obvious that Samir Khan was in fact advocating acts of terrorism, the government might well have grounds to prosecute him based on his "intent." But what if a survivalist posted the exact same article online, with the intent of helping his fellow preppers fend off attacks in tomorrow's zombie-infested wasteland? One man's crime is another's Boy Scout motto.

The reluctance of the Supreme Court to curtail First Amendment free speech protections is hardly the only reason, however, why we're likely to always be able to find out how to make a bomb on the Internet. There's also the question of practicality. In other words, even if our government made a concerted effort to order every Internet Service Provider to take down every copy of the "Lone Mujahid Pocketbook" there's absolutely no guarantee that the tactic would work. The world's a big place, and there's always going to be a website, somewhere, where potentially noxious information is made available.

"First Amendment law is a very big messy area of law," says Tien. "But one of its principles is that you are not going to reward futility. The most basic example of that is that if something is 'widely known.' For example, it is really widely known that certain kinds of chemicals in certain combinations are explosive. The idea that you could somehow take that out of the realm of speech or punish people for publishing that ... well, there's a limit to playing pretend, to thinking that we are going to make the world a better place by somehow stifling something that many many people know."

The paradox here is that the Internet is, fundamentally, a mechanism for making information much more "widely known." Thus the Internet, in effect, backs up the constitutional protection for free speech with a profound infrastructural protection. The futility of trying to stamp out all bomb-making instructions online ends up giving judges even less of a reason to try to criminalize it.

The troubling aspect to this essential function of the Internet is that it provides a conduit for information that previously was not that widely known to become more prevalent. This function is at the heart of the whole do-it-yourself movement! For the most part, it's a really great, liberating phenomenon. And we're only at the beginning of a major transformation. When you combine the Internet's facility for sharing information with the rapidly changing landscape for do-it-yourself manufacturing we end up with potentially volatile situations that courts have hardly begun to grapple with.

The advent of 3-D printed gun parts has already thrown into question the feasibility of gun control laws (whether or not legislators ever find the backbone to actually pass any new laws). The same principle can be applied to sophisticated bomb parts. What if the Tsarnaev brothers had access to a 3-D printer and the design code for detonators and other parts necessary to manufacture increasingly complicated and powerful bombs? What if you could manufacture a Claymore mine in your own living room?

It is illegal for an ordinary citizen of the U.S. to own a Claymore mine, but it's going to be very hard to stop people from sharing the code necessary to manufacture a working replica of, for example, a Claymore mine's M-57 firing device (aka "clacker"). Who knows -- the act of sharing that code might even be considered "free speech."

In the aftermath of the Boston bombings, Williams-Sonoma announced that it was temporarily pulling pressure cookers from shelves in stores in Massachusetts. It's hard to conceive of a more pointless, cosmetic gesture. The availability of pressure cookers is not the problem. Heck -- it probably won't be long before we can make our own pressure cookers using 3-D printers. The information will be out there.

It's the existence of people with murderous grievances or ideological obsessions or sheer mental dysfunction that is the problem. Because where there is a will, there is a way, and the Internet is here to grease the skids. Barring some kind of totalitarian control over our lives, à la the Chinese Communist Party's efforts to control the Internet, this is the world we live in, a world where our ability to learn how to do harm to others is effectively unlimited.