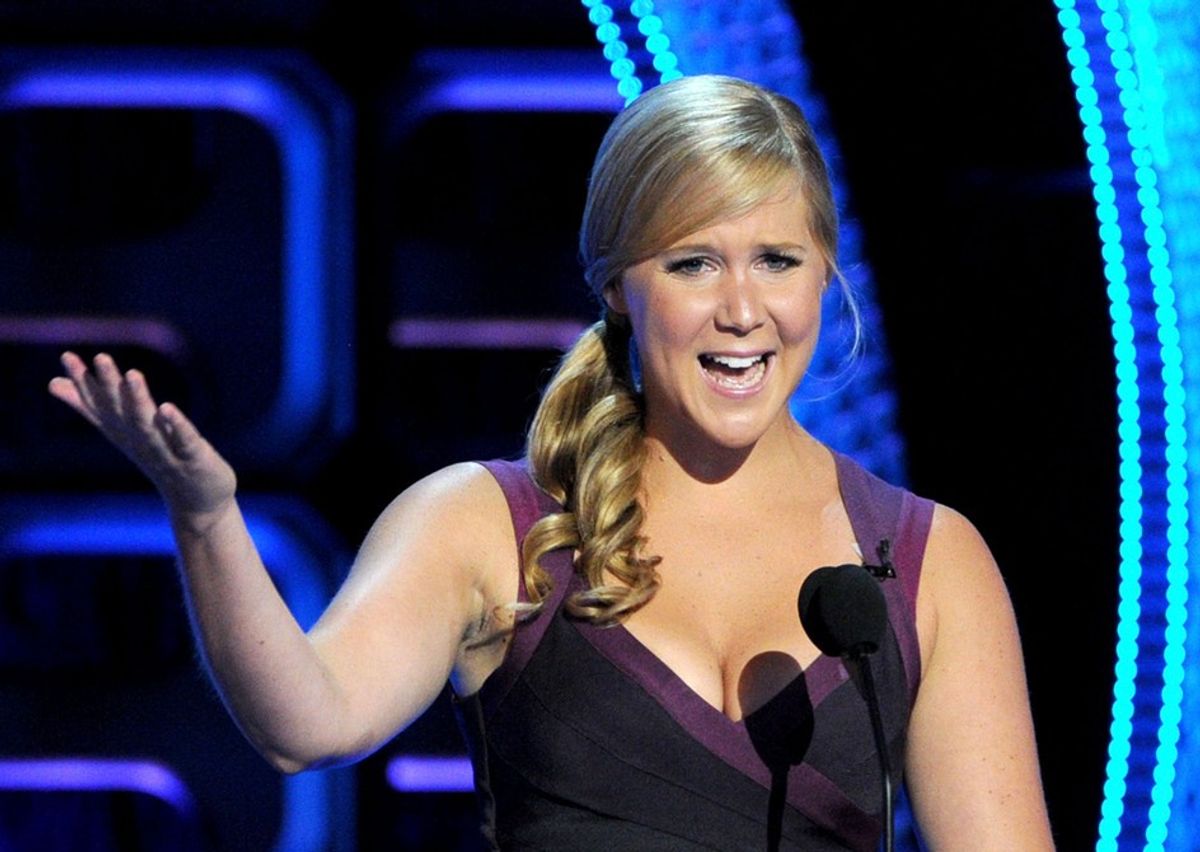 Amy Schumer’s 2012 Comedy Central special, "Mostly Sex Stuff," opens with the comic standing in a cartoon forest, surrounded by various flora and faunas: mushrooms, squirrels, chirping bluebirds. Schumer is dressed as Little Red Riding Hood, her blond curls and ski-slope nose peeking out from beneath the cape. When she removes her hood, the camera pans out to reveal a far less idyllic scene: the squirrels are flogging each other with whips, the mushrooms have transformed into enormous phalli, and two unicorns are copulating against a tree.

Like the fairy-tale forest that turns out to be something more akin to a Hieronymous Bosch painting, Amy Schumer is far less virtuous than she appears. The comedian, whose series "Inside Amy Schumer" premieres on Comedy Central April 30, boasts one of the most subversive voices in comedy, imbuing riffs on porn, abortion and below-the-belt grooming (she refers to bikini waxing as “getting my vagina ready for its first quinceañera”) with a sly, oddly poignant sensibility. A bit from "Mostly Sex Stuff," on hooking up with a man without testicles, is particularly illustrative: “Girls don’t care about balls, but when they’re not there we miss them. You know, they’re like grandparents.”

For the past 10 years, the 31-year old Schumer has been touring the country and appearing in small roles on shows like "Girls," "Louie" and "Curb Your Enthusiasm" (she also drew controversy for her appearance on 2011’s "Comedy Central Roast of Charlie Sheen," where she consoled "Jackass’" Steve-O on the death of his former co-star Ryan Dunn: “I know you must be thinking it could have been me, and I know we were all thinking, Why wasn’t it?”). Yet with "Inside Amy Schumer," the foul-mouthed comedian is poised to become a household name — albeit among households where testicles are frequently compared to grandparents. Salon caught up with Schumer to chat about sexting, women in comedy and deriving creative inspiration from Brazilian fetish porn.

I’d like to ask you a little bit about the format of your show, which is a very loosely structured, absurdist sketch-meets-stand-up-meets-woman-on-the-street interviews kinda thing.

Yeah, totally. I just took my core favorite elements of what I think I’m the best at and what I enjoy doing the most, and we just kinda mushed them all together. I always loved those "Real Sex" interviews with the people on the street. It’s just fun to see, like, normal people talking openly about what they’re like behind closed doors. And I’ve been touring as a stand-up for almost 10 years, so we wanted that to be one of the elements, and I’m an actress and a writer, so we slapped that in there too.

Yeah, structurally, to me it kind of reads like a "Louie"/"Portlandia" hybrid — the stand-up segments interspersed with these quirky, eight-minute sketches — but I was wondering if you used any other TV shows, particularly other comics’ TV shows, while you were developing your own.

The truth is, even though we didn’t model our show after anybody else’s, people have compared it to "The Chappelle Show," to "Louie" or to "Insomniac With Dave Attell." So those are good things to be compared to.

One of my favorite moments of the second episode is when this guy you’re seeing sexts you, and you’re freaking out over what to text him back, and you call up your girlfriend, and she’s like, “Just be yourself,” and hangs up immediately.

(Laughs) Yeah, that was my sister. That was my real-life sister.

No, I’m a girl’s girl. I’m very close with a lot of male comics, but I love my girlfriends and sometimes it feels like hanging out and talking about hooking up with someone and who you’re dating is more fun than the actual relationship. That sexting scene is obviously exaggerated, but it does come from a real place. Like, I have been sitting there and I have gotten a text from a guy I’ve been dating that’s so obviously an attempt to get us to send each other sext messages, and I don’t know what to say! So because I don’t know what to say, I just say things like, “Hold me,” or “I wanna hug your penis.” Those scenes come from somewhat real situations.

I assume that’s not the case with the opening sketch in the first episode, where you’re auditioning for a "viral marketing video" that turns out to be [2007 pornographic scat fetish video] "2 Girls 1 Cup."

And at the end, the punch line is that you’re totally down to do all the disgusting things that he’s describing, but then the casting director asks you to lose five pounds.

“Lose a couple pounds, mainly in your face." Yeah, I think that’s like a little comment on how even though this girl must totally defile herself, they’re like, “OK, you’re willing to do all this stuff, but we’re gonna need you to lose some weight.” There are little social comments like that throughout the show.

You’ve been going on auditions for years. Is that something that’s happened to you when you’ve been auditioning? It seems to be a recurring theme in actresses’ Hollywood audition stories.

With the success of shows like "Girls" and "The Mindy Project," it seems like this cultural moment is so primed for the funny, smart girl.

I feel like I want to make an example. I’m in good shape. I’m comfortable in my skin. I don’t want to do what happens to a lot of chicks who get their first couple of roles. They drop all their weight and start looking like bobblehead versions of themselves.

In your stand-up special, "Mostly Sex Stuff," you have a joke about how journalists are always asking you if it’s hard to be a female comic. Now that there are more visible female comics out there, do you get asked that question less now?

Yeah, you would think that would be a question that would come up less than it does. But no, almost every interview I’m asked if it’s harder to be a female comic. That, and also how I feel when people say women aren’t funny. I think that question just comes out of laziness. ‘Cause I don’t think it’s true. And while I’m sure there are some people who say that women aren’t funny, I don’t think most people do. I think those things are perpetuated by journalists, and I don't actually run into it that much.

But you still hear, “I don’t usually think women are funny, but you’re funny”? Are these women or men telling you this, usually?

Both. It’s men and women, equally.

Nope. Somebody just told me that in interviews, people don’t necessarily want the truth, but I can’t help it. I don't think that will be ever something we get past.

I think it has something to do with the general aggression toward women, and it being pounded into people’s heads that it’s just not possible for women to be funny. Even though we’re living in the times we’re living in, there is still stigma with women in general. People want women to be in a certain place. And not everyone’s comfortable with a woman speaking openly and honestly. When I read Gloria Steinem quotes, I just think that we aren’t that far along, or much further along than when she was.

So when you see headlines like, “This is the year of women of comedy!” or “How 'Bridesmaids' changed everything,” do you say, “Oh, this is a great thing,” or, “Ugh, that’s so not true”?

It's exhausting to hear about, of course. But it’s a battle that doesn’t seem like it can be won. The best thing for me to do is just do my work and make people laugh and change their minds without talking about how I’m changing their minds.