"Didn't you get tested?"

Every mom feels judged, but even the sight of my son prompts complicated questions about how he came into the world 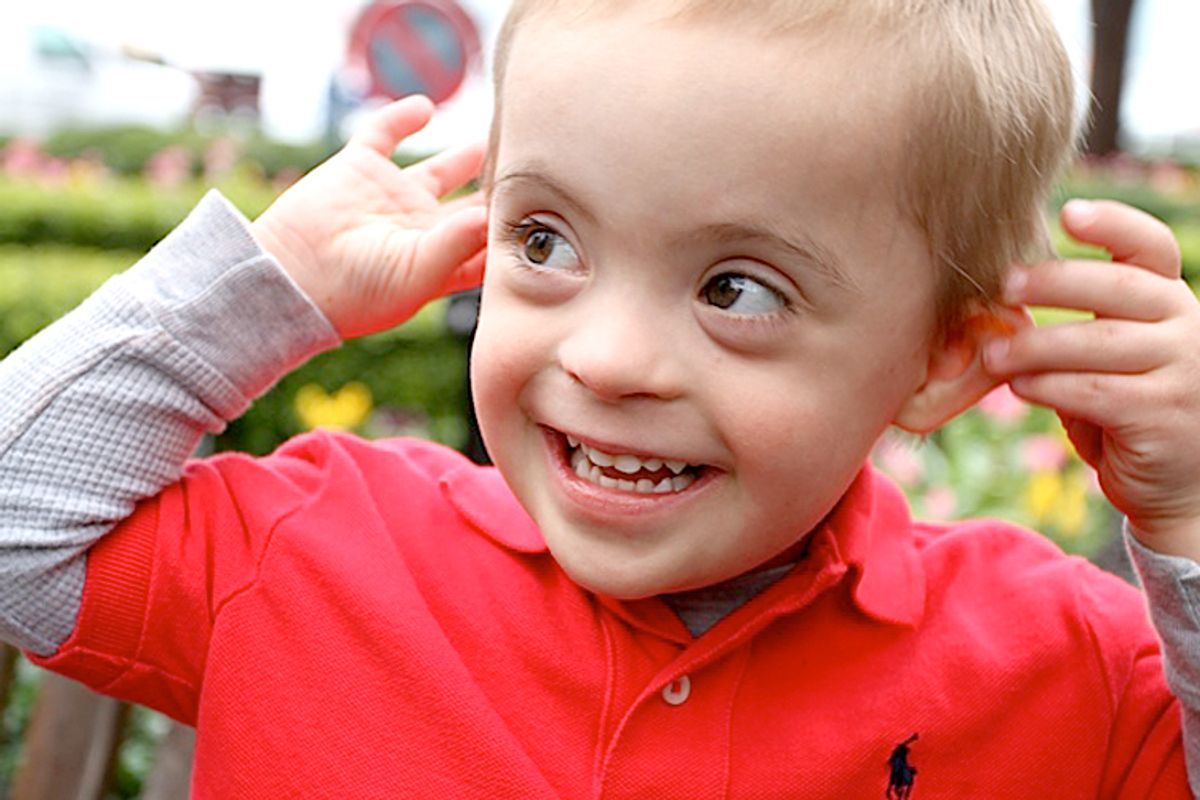 One morning last fall, my son sat on the subway platform and refused to get up. It was rush hour, and there were puddles of dirty water on the concrete. As the stream of commuters pushed around us, several people stopped to ask if they could help. I thanked them and shook my head.

“Henry,” I said brightly. “Do you want to go to school?” Henry loves school. Although I was seething with frustration, I had read the parenting manuals that encourage a person in my situation to redirect a recalcitrant child by focusing on future rewards.

Henry nodded without much enthusiasm.

“You have to walk up the stairs to get to school,” I reminded him, firmly grasping his hand.

Reluctantly, he got to his feet and slowly climbed to the street, stopping emphatically on each step. At the top, he sat down again. An icy rain was starting to fall.

He shook his head, pulling his hand away. I pulled back more energetically, thinking about everything I had to do once I got to work. Henry lay down on the wet sidewalk.

That was when I lost it and grabbed him around the waist. “No more games, Henry. I’ve had it. We’re going to school now!” I panted, hauling him roughly to his feet. As he cried in protest, I half-dragged, half-carried him the remaining block and a half to school. I deposited him unceremoniously at the door of his classroom and retreated to a nearby Starbucks, trembling with shame.

No mother feels good about getting mad at her kids in public. Losing your temper only makes things worse, and besides, it’s embarrassing to have strangers witness your worst moments of parenting. But in our case, the shame is compounded by the fact that my son is already a visible target, the very sight of his body a red flag for some of the most conflicted bioethical debates of our time.

This is to say that Henry has Down syndrome. I can think of no other bodily condition that triggers such immediate and visceral assumptions about a family’s beliefs, values and quality of life. Seeing a child with Down syndrome invites other people to question the choices that led to his being in the world.

We live in a moment of deeply conflicted social meanings about Down syndrome. Where a generation ago, parents were advised to institutionalize a baby with Down syndrome and forget that he had ever been born, today attitudes toward people with intellectual disabilities are increasingly tolerant, and even affirming. Recent films like "Monica and David," "Girlfriend," "Any Day Now" and "Yo Tambien" showcase the talents of actors with Down syndrome. Lauren Potter continues to have a regular role on the popular TV show "Glee." Students with intellectual disabilities are increasingly graduating from high school and attending college. There are many more opportunities for them to find independent living situations, satisfying social lives, and meaningful employment.

This greater acceptance coexists with an ongoing desire to prevent the birth of children with intellectual disabilities. Geneticists continue their search for prenatal tests to detect Down syndrome sooner and less invasively. Early test results are desirable because it is assumed that after receiving a positive diagnosis of Down syndrome, the next logical step is to terminate the pregnancy. In early 2012, Sequenom announced the MaterniT21 PLUS blood test, which could be administered to women as early as 10 weeks of pregnancy. In a press release, the company touted its commitment to providing “superior prenatal care,” continuing the by-now familiar conflation of maternal health with the genetic makeup of the fetus, as well as lumping Down syndrome together with such fatal conditions as Trisomies 13 and 18. In this context, bearing a child with Down syndrome is increasingly seen as a choice, and one bound up with charged debates about reproductive freedom. While uplifting stories allow society to congratulate itself on becoming more tolerant, prenatal tests send a message that we still wish people with Down syndrome would simply become extinct.

The quest to prevent future births coincides with continued prejudice against living people with Down syndrome. Last summer, a California family splurged on first-class airplane tickets, only to be prevented from boarding because the pilot thought their teenage son with Down syndrome was a “flight risk.” Despite their protests, they were escorted from the gate and rebooked on another flight, where they were assigned to the back of the plane.

Earlier this year, a man with Down syndrome named Robert Ethan Saylor refused to leave his seat after attending a screening of "Zero Dark Thirty." He died of asphyxiation while being restrained by security guards attempting to remove him from the theater. Although the coroner initially determined his death a homicide, a grand jury overturned this opinion, ruling that the security guards were acting in accordance with their training. Around the same time, a 5-year-old boy with Down syndrome named Milo Castillo and his family were eating in a Houston’s restaurant when another customer asked to be reseated, declaring “special needs children need to be special somewhere else.” While most of the news surrounding this story focused on the waiter who came to Milo’s defense, plenty of people sided with the customer. One reader responded to a blog post about the story by asking if this were “some kind of sick political correctness joke?” Much as we love heartwarming stories of success and accomplishment, the sight of people with Down syndrome in public may still inspire resentment and loathing.

To be the parent of a child with Down syndrome is to trigger a predictable chain of questions: How did this happen to you? Are you opposed to prenatal testing? And if so, is your position based on conservative religious or political beliefs? Or did the testing go awry? If not, why would you choose to have such a child? I know that strangers must wonder, because I hear these questions all the time. “Didn’t you get tested?” asked a well-known scholar of disability studies at a cocktail party, after learning that my son had Down syndrome. I get the same question from doctors, therapists, teachers and other professionals who should know better. “Did you know you were having him?” asked a mom I had just met during the first week of preschool. “No,” I wanted to snap at her. “It was the darndest thing. I couldn’t figure out why I was getting so fat!” Or maybe just, “Did you know you were having your son?” What these people are really asking is how a well-educated, successful, ambitious woman like me came to have a child with Down syndrome. A part of me wants to say it’s none of their business. But I also can understand exactly where they’re coming from. As prenatal testing becomes the norm even for women under the age of 35, the parent of a child with Down syndrome will inevitably face these questions.

Let me get rid of the elephant in the room by disclosing that, yes, I did make a choice. Although I was 38 at the time of my pregnancy, my husband and I decided not to have an amniocentesis. We didn’t opt out because of religious or political beliefs. I believe strongly in reproductive freedom, and I would never presume to tell another woman not to get tested or not to abort an unwanted pregnancy. But we wanted this child, and we didn’t think the results of a genetic test would change our minds. We don’t believe prenatal testing can tell you all there is to know about the person your child will become, nor can it predict the future happiness of your family.

When I get mad at my son in public, I’m ashamed to think that I may have been exhibit A for someone who wants to argue that I’ve made the wrong choices. “Look at how miserable she is,” I imagine that hypothetical person thinking. “Down syndrome has clearly ruined her life. I wonder how she ended up in that situation? Thank goodness we have tests to prevent that from happening.”

To that person I want to say: Yes, at that moment I was miserable. And yes, raising my son is sometimes challenging. He needs extra time and help to learn basic skills that might come easily to a more typical child. He is five, and he can’t yet brush his own teeth or put on shoes and socks by himself. He hasn’t figured out how to make friends with other children, and is stubborn as a mule. Other challenges have more to do with the social environment: We’ve struggled to get him into an adequate school, to find activities where he can be included, and to weather the rude questions of other parents. But most of the time, Henry brings us the same frustrations and joys as any other child: He is loving and affectionate, we delight in his accomplishments and enthusiasms, and we enjoy his company.

Since Mother’s Day is just around the corner, here’s the gift I’d most like to receive. When I get mad at my son in public, please remember that Henry is a child, not a political statement. Please don’t take my anger and frustration as a sign that my son’s life is less worthy than that of any other person. And please don’t make assumptions about the choices I made or the things I believe. I lost my temper. So what? It could happen to anyone.

Rachel Adams teaches English and American Studies at Columbia University. Her book, "Raising Henry: A Memoir of Motherhood, Disability, and Discovery," will be published in the fall by Yale University Press. You can follow her on twitter @RachelAdams212.