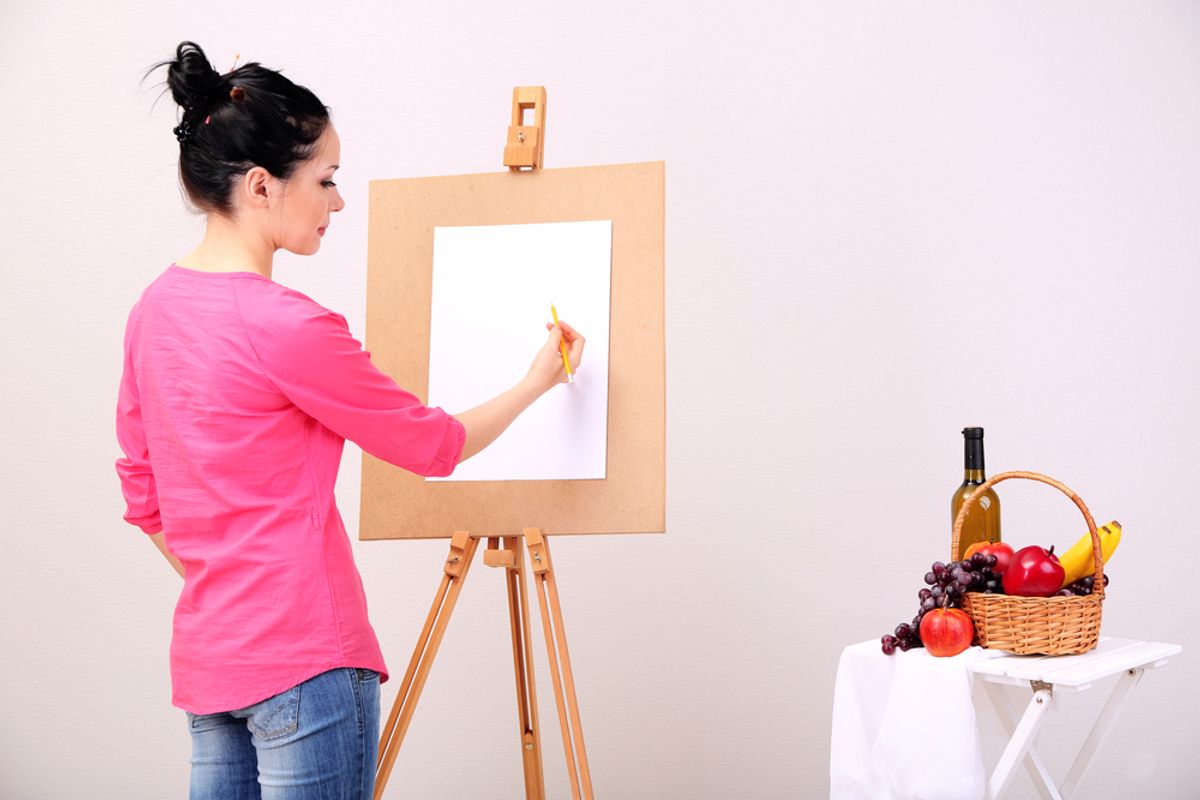 Three months ago I attended a discussion at Hunter College called “…towards meaning in a plural painting world.” The panel sought to examine today’s multiplicity of painting styles and determine if this is a positive or dilutive development for painting’s meaning as a whole. Last Wednesday, the Pratt Institute took on similar subject with a panel titled Painting Matters Now: a Conversation.

Moderated by artist Nancy Grimes, she explained this panel had come out of “conversations I had with colleagues about the state of painting,” in which they asked each other “Why are young artists choosing to paint, despite attempts to drive a stake through painting? Why does one medium attract so much malice, particularly in the academy?” The focus of this panel was thus on “What matters with painting now and why?” She began by asking the panel, comprised of painters Greg Drasler, Laurie Fendrich, John Dubrow and painter-cum-writers Mario Naves and Peter Plagens, to talk about their formative years as young artists.

Fendrich recollected that as a student it was as natural to be a painter as it was to be a plumber. There was no need to justify oneself amid the rise of video and installation art, competition was slim and one didn’t feel pitted against peers working in other media. Dubrow recounted his art school experience as being the exact opposite. To be a painter was to be a particular kind of painter, usually ironic or photo-based and he realized quickly, “I was on my own.” He was happy about this, enjoying the tremendous freedom and finding productivity in working against the current.

Plagens, claiming to be the most ancient of the panelists, discussed the battle between the Bay Area figurative painters and abstract painters while he was a student at USC in 1958–62. Figurative painters were more prominent, but there was an “incipient avant-gardism forming in LA that would accuse figurative painters of being mere illustrators.” Drasler recalled the influence of Jim Nutt and the Chicago Imagists and remembered the impact of James Rosenquist’s epic painting “F-111,” named after the fire bomber plane and seen by the student at an age when he was draftable. Drasler took it as symbolic of his vocation, when one day his studio building caught fire and all that survived were two paintings.

Naves mentioned how he drifted into painting, with interests in philosophy and writing, while a graduate student at Pratt. With rumblings of painting’s perceived death and resuscitation throughout his education, he reminded everyone that painting has been around for a long time “since the scratchings on cavewalls … the only place where painting is dead is the art world.”

Grimes asked the panel if painting was still viable, or if it is perceived as a marginalized medium. Conversation then turned to the schism between painting, a slow medium engaging one viewer at a time, and newer mediums attuned to the large-scale expectations of global art fairs.

Fendrich remarked painting was not marginalized considering it is predominantly what’s on sale in Chelsea. But compared to higher-profile work — what Fendrich called “big installation and international art, like Christian Marclay’s ”The Clock” — painters feel like their efforts are puny by comparison. She referenced disillusionment with the continued bloat of the art market, citing the critic David Hickey’s much touted exit from art writing. There is a disgust at who is actually “powering the art world” with artists “aside to the negotiations.” In the past, aesthetic discussions around art gave painting a lot of energy, but today’s art magazines have become merely descriptive. Drasler mentioned a loss for culture now that an artwork’s merit is chiefly determined by the price it fetches at auction.

Plagens, who played the devil’s advocate throughout the evening, remarked painting was not marginalized, but neither does it have the same “historical primacy” it once did. Citing the 17th century by way of hyperbolic comparison, he noted that “biennials are everywhere and the artworld is much more global.” Painting doesn’t carry as much “cultural clout” as it once did, and can’t be scandalous as it once was in the hands of such artists as Jackson Pollock. Plagens also expressed a weariness of, “painters being sentimental about painting.” If assessed objectively, “painting is not really under attack.”

Grimes countered that she’s witnessed students feel coerced away from painting. A student in the audience piped in that she was often told “everything has been done in painting” and felt a need to justify her choices. Dubrow remarked that the “viability” of painting was “a problematic idea.” That there are great painters in history who aren’t known and that over time individual contributions get sifted out. “When I go to museums, I don’t see [individual artworks] as markers in history,” but rather “how an artist has personally engaged [an artwork’s] construction.”

Talk turned to other forms of art institutionalization, namely academia and the College Art Association. Fendrich mentioned the number of CAA grants going to MFA students doing research-based art. “Art can’t stand alone … it is the backstory that is interesting.” This is contributing to deliberations as to whether the PhD will replace the MFA as the terminal degree in fine art. She also brought up the need for creative studies as a foil to the emergence of STEM education, an initiative focusing learning primarily on the sciences, technology, engineering and math. Plagens pointed out the MBA is already the new MFA, “Students don’t want to be paint-splattered.” He spoke of the art school “critique” which conditions young artist to get good at giving explanations, a subject James Elkins has taken up recently in his book Art Critiques: A Guide. An audience member pointed to the degree of philosophical obfuscation in art school that prevents a student from simply engaging a medium. There is a “bait-and-switch” involved: “If someone wants to learn about basketball, you don’t hand them a golf club.” This echoed an earlier comment by Dubrow, that “It has been a mistake to try and lump painting in with other art forms.”

Grimes then asked, “What are the issues for painting that matter?” This is a question with no clear answer, but one that would provoke impassioned statements from the audience. Plagens compared painting to both jazz and the Spanish Empire, in that they’ve all had their heyday and shared moments of greatness. He considered all three important as discreet subjects but now painting itself is one of a bunch of art making alternatives. Certain artists come along and tackle issues of their time, leaving issues for the next generation to solve, but to insist on a primacy of painting is like a President running on an old or outdated platform.

Panelists spoke of the speed, singularity and clear boundaries of painting that provide both freedom and room for error that can be generative of new work. Fendrich mentioned that a reason painting remains “Queen of the arts” is its inimitable color, a quality competing mediums can’t duplicate. Drasler brought up the changing understanding of what painting is, “not just paint on a canvas, it can be ephemeral.” He explained that some installation art derives its elements and construction from the language of painting, while some components of painting are moving into other practices that embrace sculpture and time. These comments had me thinking about Franklin Evan’s recent painterly environments, while Naves noted that “so much with painting is a matter of perseverance, an individual pursuit that takes a long time.”

An audience member remarked about a desensitization taking place in the arts, where we have generations of curators who “can’t see.” Likewise … “You walk through the Prado and people are snapping images of the paintings on their digital devices without looking at the paintings.” Someone else brought up thePierro della Francesca show at the Frick as an example of painting that delivers on all accounts: formally, metaphorically and humanely. He also lamented the mostly narrative and conceptual approaches to a lot of art today. “People aren’t really interested in the internal relationships in paintings and the literal was so much stronger in the culture now (resulting in) mediums like painting and poetry to be marginalized.” As a challenge to this trend, Fendrich, cited both G.E. Lessing’s Laocoon: An Essay on the Limits of Painting and Poetry and James Elkin’s What Painting Is, books that instead observe the close, intrinsic properties of the medium itself.

At one hopeful juncture in the evening, Fendrich reminded the audience that with painting “everything has not been done. If you mine culture, there are still plenty of roads to walk down.”