When did the definitions of these terms come to hinge on the perpetrator's weapon of choice? 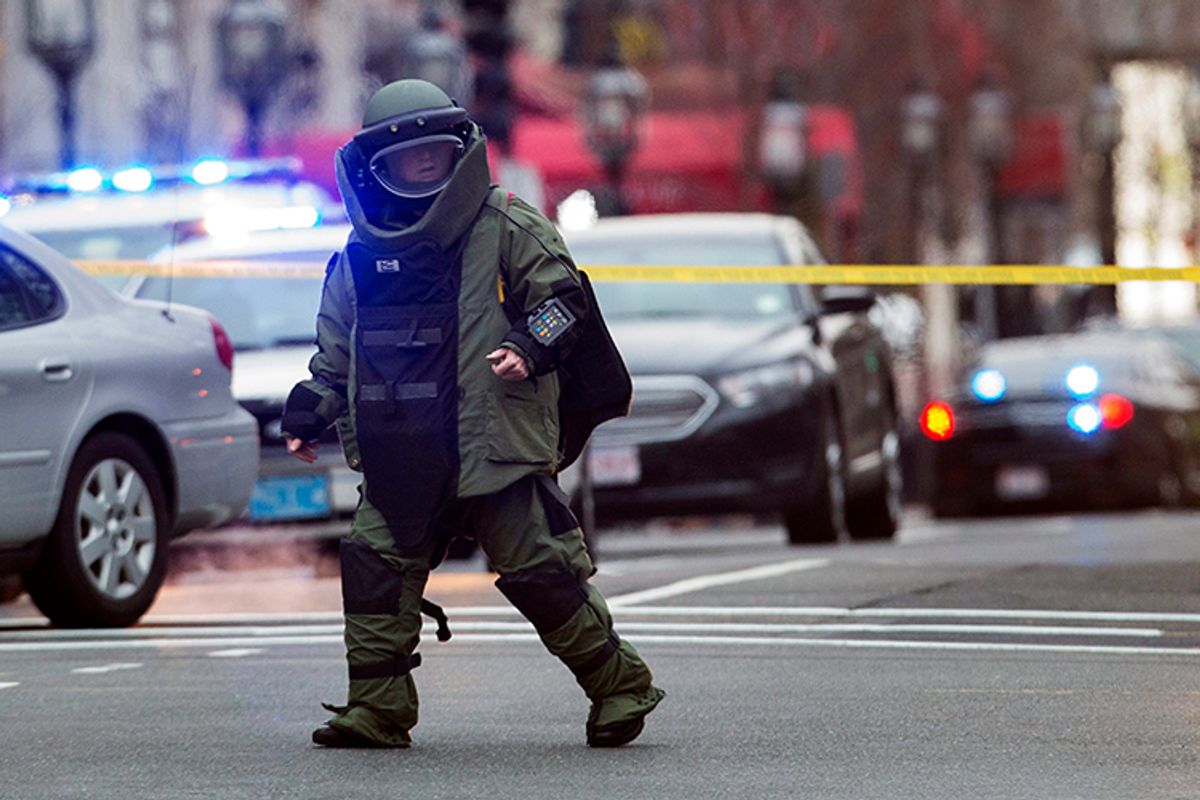 For critics of American foreign policy, it’s all but axiomatic that the designation of a violent act as “terrorism” says as much about the accuser as it does about the accused. The U.S. government itself can’t decide on a single working definition of the term, but a standard one denotes unlawful politically-motivated violence designed to intimidate a government or civilian population. Put pressure on any part of this definition and it starts to buckle.

“Unlawful”? Why can’t terrorists — as per the word’s original meaning — be state actors? “Civilian population”? The category becomes meaningless if individuals can be retroactively subtracted from it for the crime of being struck by an American drone.

The arrest of Dzhokhar Tsarnaev last weekend has most obviously raised questions about what the state sees as constitutive of “political motivation.”

As several commentators have pointed out, we have scant evidence that the Boston marathon bombing suspect’s motives were more “political” than those of mass-murderers like James Holmes or Adam Lanza — yet only the Muslim immigrant inspired Republican fantasies of eviscerating an “enemy combatant.”

On Monday, the Obama administration announced that “this terrorist,” like many before him, will be prosecuted in federal court as a civilian. But the real news here is the unusual charge he faces: Possession of a weapon of mass destruction. George W. Bush’s imaginary Iraqi nukes have come back to life as a pressure cooker filled with nails. The charge drives home what has been implicit since the day of the bombing: The state’s understanding of the “violence” involved in terrorism — on the face of it, perhaps the most straightforward part of the definition of terror — is as politically contingent as the meaning of “unlawful” or “civilian.” What the United States means by terrorist violence is, in large part, “public violence some weirdo had the gall to carry out using a weapon other than a gun.”

From the moment the bombs went off at the Boston marathon, the government and the media treated the attack as a terrorist act — a charge that didn’t stick to the shootings in Aurora or Newtown even in their immediate, chaotic aftermath. As a White House official told the New York Times that first afternoon, “Any event with multiple explosive devices — as this appears to be — is clearly an act of terror, and will be approached as an act of terror.”

The only government official to prominently question this logic was an “exasperated” Missouri Senator Claire McCaskill, who asked Homeland Security Secretary Janet Napolitano at a committee meeting last week whether she knew of any definitive difference between the Boston bombing and the small-town shootings. “In terms of intent for death and destruction and injury? No,” Napolitano stumblingly replied. “Methodology, yes.”

In contemporary American political discourse, all “methodologies” of violence are not created equal, nor are they differentiated based on the scale of death, destruction, and injury they cause. Mass murderers who strike with guns (and who don’t happen to be Muslim) are typically read as psychopaths disconnected from the larger political sphere — even if, like Jared Lee Loughner, they target politicians; even if, like Christopher Dorner, they lay out their precise political motivation in a manifesto, have military training, and evade authorities on a 10-day cop-shooting spree. (LAPD chief Charlie Beck did call Dorner, on the lam at the time, a “domestic terrorist,” but higher-ranking officials neglected to pick up the meme. Sensing that Dorner had scrambled the discourse around terror, Glenn Greenwald asked facetiously why the government didn’t simply send a drone after him.)

On the other hand, mass murderers, or attempted murderers, or even mere vandals of all races, creeds, and political affiliations who strike with bombs — or anthrax, or fruit flies, or of course, commercial airplanes — are terrorists. It’s as though we’ve quietly determined that these are cruel and unusual forms of violence, and so, de facto, are designed to terrify whole populations in a way that mass shootings aren’t. And that, in turn, suggests that at some level we think a guy with a gun shooting a few dozen civilians is, relatively speaking, kind of normal. America, it seems, has carved its understanding of terrorism out of its culture of gun violence; our terror of bombs and our acceptance of guns go hand in hand.

Unlike the defeat of the gun control bill in the Senate earlier this month, this isn’t a phenomenon we can understand simply by following the money. Though the gun lobby certainly both drives and benefits from it, the strange hierarchy of destruction we’ve constructed also goes deeper than current NRA rhetoric into American mythologies around violence.

Take, for instance, the New York Times’ coverage of the Boston attacks. Three people were killed in the explosions at the marathon, and three more (including suspect Tamerlan Tsarnaev) died in the perpetrators’ post-bombing gun rampage. But while the Times described the earlier scene as “a war zone,” it depicted the second wave of violence as a “Wild West-like shootout.” The terror is over, y’all; now we’re just playing Cowboys and Indians, and we all know who wins in that game. (That Chechnya and the surrounding Caucasus region historically functioned as Russia’s “Wild West,” a playground where dissolute young aristocrats could stage exciting duels, only makes the analogy more painful.)

The American left has its own vague Hemingway-ish fantasies about the existential intimacy supposedly conferred by wartime gun violence. It creeps, for instance, into critiques of drone warfare, when a very good point about the automation of carnage — that cheap, low-risk killing encourages aggressors to keep killing — morphs into an argument that, as one prominent human rights organizer put it,

it causes dehumanization of victims to keep them at the distance of a  video screen. Those who protest that it’s not that much further than missiles launched from a ship at sea to prosecute a campaign on land  should recall  that there is a considerable difference between being stationed on a military  carrier versus doing “battle” from outside of Las Vegas on civilians in Pakistan.

The implication here is that it feels ghastly to kill humans at close range because their humanity is unavoidable, and so — to some extent for a fighter pilot, and more so for a minelayer, and most of all for a sniper — this repulsion will act as a check on military violence.

But this, as the entire history of war suggests, is not how it works. Dehumanization can be produced by war itself, and racism, and a thousand other kinds of hatred, and, yes, by technologies that create distance between killers and their victims — but, as Hannah Arendt argued, those technologies are so widespread and insidious that we may as well just call them modernity.

The state, in Max Weber’s famous definition, is an entity that successfully claims a monopoly on the legitimate use of violence within a given territory. The United States perpetually remains in the awkward position of claiming something just shy of a monopoly on the legitimate use of violence over the entire globe, while ceding its monopoly on gun violence within its borders. To commit an act of mass violence in America with a weapon other than a gun mocks this tenuous balance; bombs and planes and noxious chemicals are all the poor state has left. In that light, for a non-state actor to blow people up on U.S. soil really is inherently more political than shooting them. It’s positively un-American.