"The Woman Upstairs": Rage of a frustrated artist 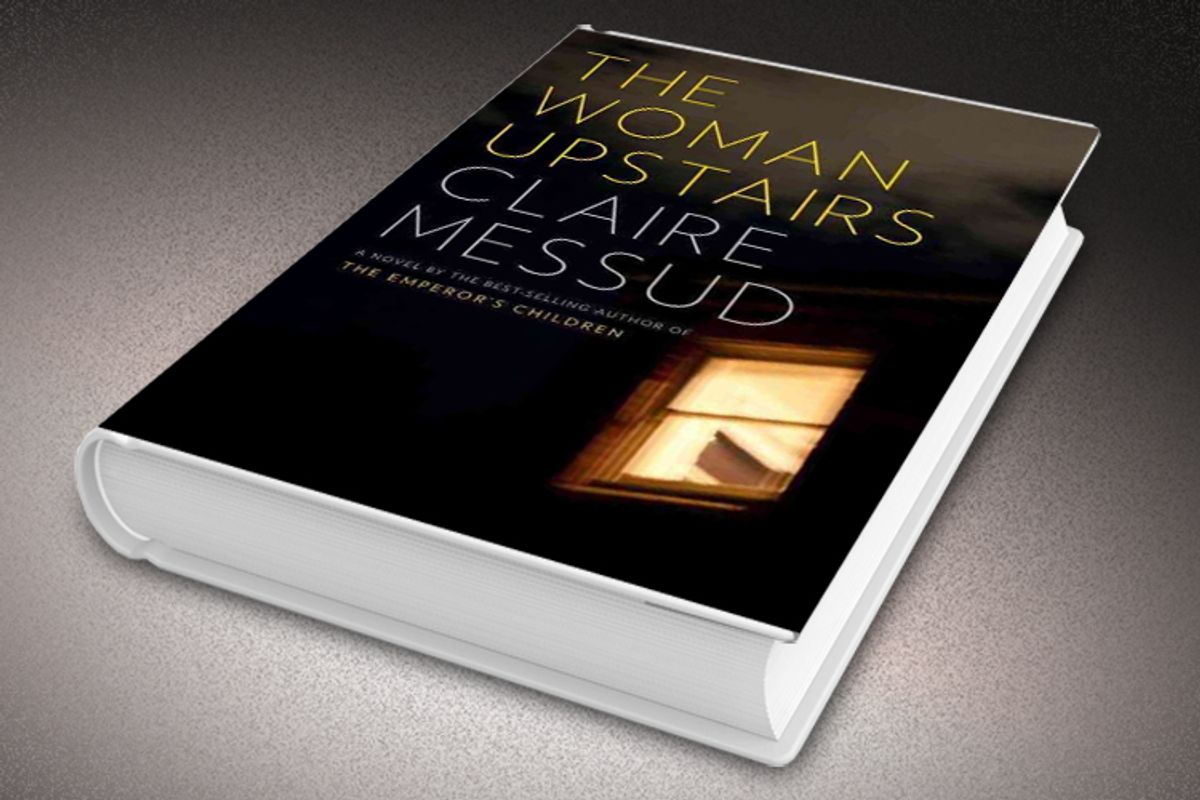 As Nora Eldridge, the narrator of Claire Messud's claustrophobically hypnotic new novel would have it, we are all of us surrounded by reservoirs of invisible rage. "The Woman Upstairs" purports to be the story of one of the ragers, although Nora both does and doesn't wish to be identified with the archetypal figure in the novel's title. The counterpart to Dostoyevsky's Underground Man, the Woman Upstairs, in Nora's formulation, is a recessive, barely noticed neighbor, "whose trash is always tidy, who smiles brightly in the stairwell with a cheerful greeting, and who, from behind closed doors, never makes a sound." Her "day's great excitement is the arrival of the Garnet Hill catalog." She strives not to cause any inconvenience and is resigned to always coming second (or third) in other people's lives,

A ferocious portrait of creative and spiritual frustration, "The Woman Upstairs" begins by linking Nora's fury to her gender, a connection reinforced by the name she shares with the heroine of Ibsen's "A Doll's House." "It was supposed to say 'Great Artist' on my tombstone," she explains, "but if I died right now it would say 'such a good teacher/daughter/friend' instead; and what I really want to shout, and want in big letters on that grave, too, is FUCK YOU ALL. Don't all women feel the same?"

They don't, of course, so what is the true source of Nora's Prufrockian despair? Why, at the age of 37, did she find herself not an artist but "the favorite teacher of the Appleton Elementary third-grade class" in Cambridge, Mass., and identifying heavily with Lucy Jordan, a character in a Marianne Faithful song, who realizes that she will "never ride through Paris in a sports car with the warm wind in her hair"? Single and childless, Nora can't even claim to have sacrificed her dreams to raise her kids, although she did nurse her mother through a slow death from ALS, and she does dutifully phone and visit an aged father ensconced in a faded, "ointment-pink" apartment.

Like many first-person narrators, Nora is not entirely reliable, but, more unusually, she admits it. "If you'd told me my own story about someone else," she remarks in her emphatic and marvelously conversational voice, "I would have assured you that this person was completely unhinged. Or a child." At the center of her story is a family, the Shadids, whom Nora meets because their 8-year-old son, the "luminous boy" Reza, is one of her students. She soon befriends Reza's mother, an Italian artist named (ominously) Sirena, and the two women decide to share an artist's studio so that Sirena can continue her work and Nora can be inspired to start hers up again. The charismatic Sirena's career has just begun to take off in Paris, where the family lives, but they're spending a year in Massachusetts because her husband, Skandar, a Lebanese history professor, has a fellowship at Harvard.

Significantly, Sirena's art consists of immersive installations, "Lush gardens and jungles made out of household items and refuse," which Nora revealingly chooses to interpret as an assertion that "the beautiful world was fake." Nora, on the other hand, makes small, elaborate dioramas that meticulously reproduce the rooms inhabited by women writers and artists: Emily Dickinson, Virginia Woolf and Alice Neel. In Nora's eye's, Sirena's art channels "the life force," and she instantly develops a "girl crush" on the other woman. It's not long before Nora professes to being in love, in one way or another, with all three members of the Shadid family, who come to represent everything she longs for but is convinced, for obscure and ever-shifting reasons, she will never have.

In Nora, Messud has conjured a self-contradictory yet acutely familiar character; we've all met someone like her, if we aren't like her ourselves. She tells us she renounced the artist's life (after a brief stint in New York) because "I couldn't see myself schmoozing the way the class stars did" or because showing her work meant possibly being "humored" by people who would feel obliged to offer "fake" compliments or because her parents worried that she wouldn't be able to support herself or because it was too humiliating to be sharing an apartment in Jamaica Plain at the age of 30 or because she feared that everything she made was mediocre and derivative. Yet this hater of the art world fantasizes about "tony gatherings in the galleries of New York's Meatpacking District" and wistfully asks Skandar if, back in Paris, Sirena knew "the fancy people." She finds her current dowdy circumstances even more mortifying than bohemian poverty. And, above all, Nora wants to be "seen," apart from "the hall of mirrors, this sham and pretend of a world." She counts herself among the shams, as well, presenting a false self, a mask of the sort likely to "grow into your skin and graft itself, come to seem irremovable."

As Nora sees it, she is telling a story about what it takes to be an artist, the "ruthlessness" that she doesn't possess and that, she intimates, Sirena does. An air of imminent betrayal hangs over the novel, although it's hard to see how the Shadids could fail to disappoint Nora, who never really questions her conviction that they are capable of rescuing her and furthermore, have somehow promised to do so. Yet even as she describes the ever-diminishing emotional circles of her obsession, Nora does not become monstrous or pathological or even (like the Underground Man) absurd. This, in a way, is her tragedy; even her misery -- the pain of a woman who cannot believe she owns her own life -- fails to register as anything out of the ordinary to those around her.

Deliverance when it does come at last, takes the most unlikely form. Like Ibsen's Nora, Messud's walks offstage in a moment of pure potential. What will she do? I can't begin to imagine, and that, surely, is the point.