When she wants sex more

The stereotype is of a frigid wife, but plenty of women find themselves the more desiring partner 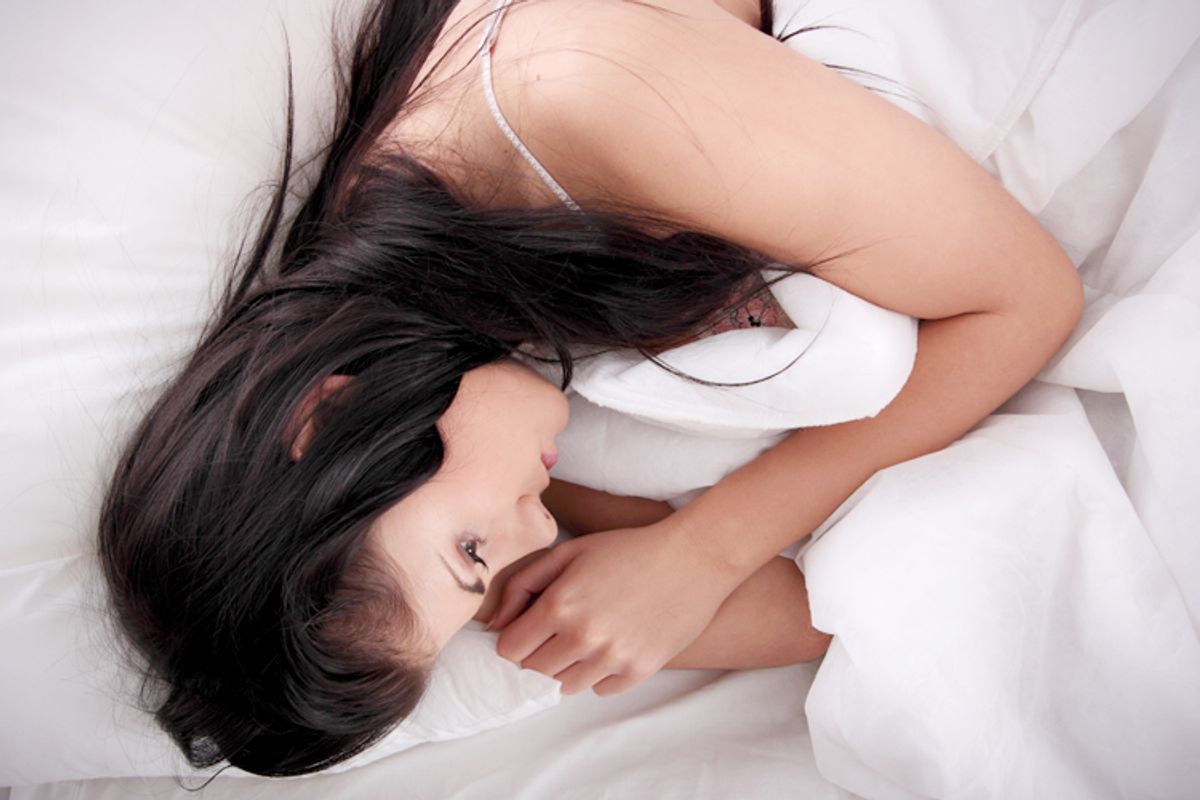 Once in bed at night, Cathy's boyfriend would almost instantly curl up in the fetal position facing away from her and begin breathing heavily as though asleep. "But if I put my arm around him, he would stiffen up and hold his breath," she says. "A couple times, I even saw him hurriedly shut his eyes." Sometimes the 37-year-old from St. Louis, Mo., would take a more direct approach, telling him, "I want to be with you" -- but she often ended up being rebuffed. It wasn't uncommon for him to ask, "Why do we have to have sex all the time?"

This is the gender reversal of what we're used to hearing: stories about women complaining of a headache or offering a simple, "Not tonight, honey." Just this week, the Wall Street Journal published a piece ostensibly about "differing expectations about sex" in relationships in general, but which fell back on the stereotype of the frigid wife who withholds sex. The piece presented only one real-life example of such a dynamic and, despite mentioning far, far down in the piece a study on desire that found no significant gender differences, the piece ran with the headline, "He Says 'More' and She Says 'No.'"

When I put out a call for women who had experienced having the higher sex drive in a relationship, I was flooded with responses -- and many of these women wanted to put me in touch with female friends with similar tales of sexual dissatisfaction. There was tremendous variability in what they considered too little sex: One expressed annoyance over an ex-boyfriend who wouldn't have sex more than four times in one night; another complained that her ex-husband wanted it no more than twice a week; and yet another reported getting busy five times in three ...

Let's be clear: None of this is to say that the real problem is men who don't "put out" (a phrase that makes sex sound like such a dreary chore -- can we please retire it?). It's to show that it isn't exclusively a "male" or "female" phenomenon, nor is it a heterosexual one; it's a human one.

Ian Kerner, a sexuality counselor and best-selling author, doesn't believe that either sex has stronger desire -- but different desire? Yes. "I would say that women tend to experience 'responsive desire'" -- in which interest is sparked after sexy times have begun -- "while men experience 'spontaneous desire,'" which seems to spring, so to speak, out of nowhere. He says this difference "can create the appearance that male desire is stronger, but what I've found is often quite the opposite in relationships."

In his therapy practice, he says, "I often meet couples who are stuck in ruts and neither partner has an interest in sex with the other, although there is often sexual interest outside of the relationship, or mismatched desire levels in the relationship," he says. "But I meet just as many men dealing with low desire as women."

For a hormonal perspective, I went to Kim Wallen, a professor of psychology and behavioral neuroendocrinology at Emory University. He says the key sex differences in desire aren't in strength but rather constancy. "This likely reflects the effects of gonadal hormones on sexual motivation and men are subjected to a constant hormonal stimulus, whereas women are subjected to a cyclical influence," he says. "In addition, women have both exposure to estradiol, which increases sexual desire, and to progesterone, which in large amounts suppresses sexual desire."

If you tuned out at the mention of "gonadal hormones" -- bad student, tsk! -- Wallen offers up a simple takeaway: "When women are interested in sex they are as intensely interested as are men." Interestingly, he says "it may even be that it is this intermittent nature of women's sexual desire that makes them more sensitive to a mismatch with their partners," he says. "When intense desire occurs, they want to act on it then as it will likely soon diminish."

The women I spoke with attributed the desire differentials they had experienced to a range of causes. Some blamed it on fundamentally mismatched libidos: The anonymous 29-year-old blogger from girlonthenet.com, the same woman who sometimes found it frustrating if a guy couldn't perform more than four times a night, tells me that she got over her anger when she "realized that, you know, people have incredibly diverse sexual needs." Now she's with a man who has a similar sex drive to hers.

Then there were familiar life stresses. Thirty-eight-year-old "Mary" says sex with her husband was great at first, but then, she says, "our lives settled into a routine." They had kids, he got busier at work and both of their parents fell terminally ill. "Maybe we're both depressed? I don't know," she says. "But with so much happening physically and emotionally, something had to go, and our sex life was it." They're both under pressure, but his sexuality is more susceptible to stress.

Similarly, 25-year-old "Martha" says of her stressed-out boyfriend, "I feel like he rejects the therapeutic powers of sex in times of difficulty," whereas she sees it as a way to blow off steam.

Debby Herbenick, a sex researcher at Indiana University, says this is a common experience for both genders. "Many women and men are dissatisfied with frequency, but it's complicated," she says. "Often they are dissatisfied in the sense that 'in an ideal world'" -- one in which they were less stressed, for example -- "they would have sex more often." Sometimes "people crave more intimacy in order to drive them to have more sex." Herbenick explains, "Just because two people want more sex with each other doesn't mean they know how to make that happen, especially if feelings are hurt or they don't feel connected or have feelings of shame or guilt for wanting sex or initiating it."

Often, the lack of sex isn't really about sex itself. "Our sex life became, to me, emblematic of an overall disinterest on his part in nurturing the marriage, compromising to meet my needs, and being aware of and responsive to my feelings," says Clare, 34. "So it might have been a case of mismatched sex drives, but more importantly it was a case of mismatched emotional needs."

Where gender differences become very real is in social expectations. Being more desiring than your partner can make anyone question their own sex appeal -- although that's perhaps especially true for women: "We get this image of women who can simply flutter their eyelashes and have guys tripping over themselves to get into bed with them," says Bex, a 20-something living in New York.

Of course, it may be harder for men than women to find themselves the less-desiring party: "I'm friends with all guys and if I mention this to any of them they say that he 'must be gay or something' to not want sex all the time," says Bex, which she knows is unfair. Cathy feels a lot of sympathy for guys who find themselves in this situation: "The guy who thinks he's supposed to be driving the penetration train gets confused when he finds himself without the conductor's hat."

Men who are more desiring than their female partners might at least have the benefit of feeling like things are as they should be. Bex says of having stronger sexual desires than her boyfriend, "It feels like I'm broken or something, which is absolutely not the case," she says. "We just never get to see an image of a man with a low drive and a woman trying to seduce him."

Of course, it's never too late to correct the public record.