Adam Lanza vs. the knockoff jihadis

Tsarnaevs seem more like mixed-up killers than big terrorists. So why is far more known about them than Adam Lanza? 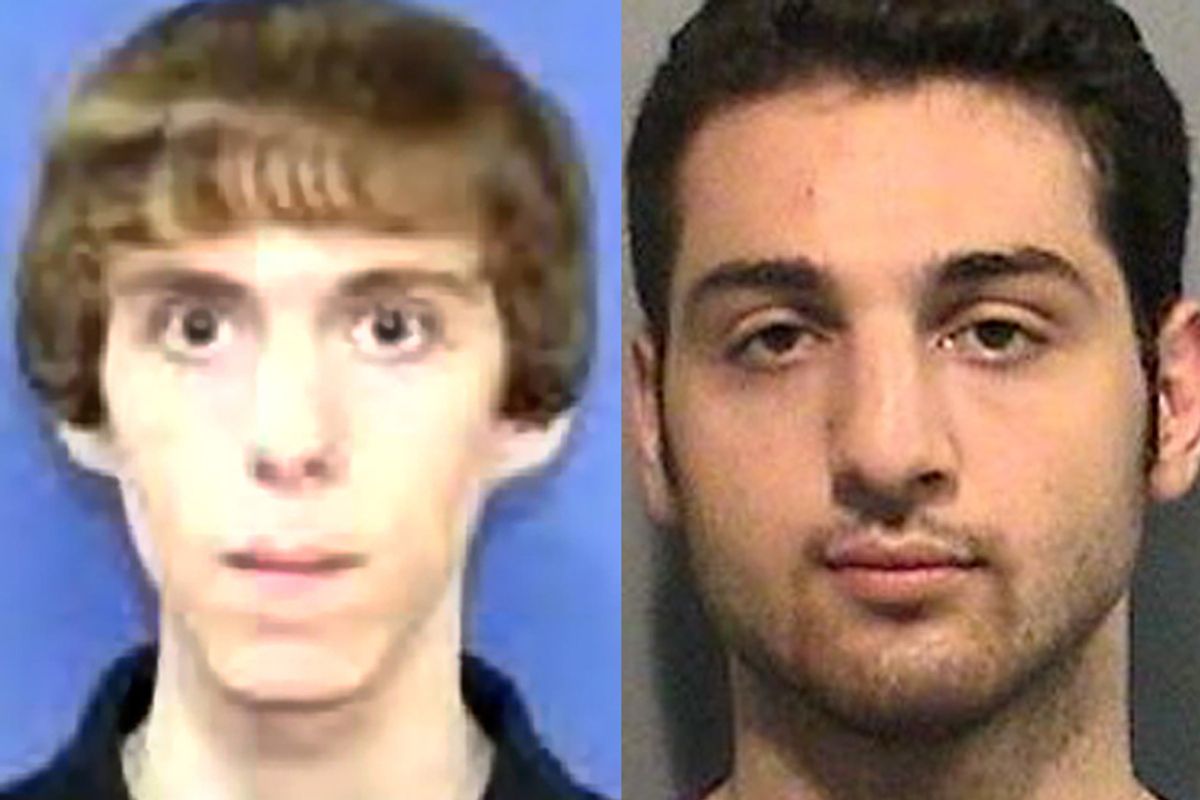 Leave it to Joe Biden – or his speechwriters – to come up with the best description yet of Tamarlan and Dzohkhar Tsarnaev: “knockoff jihadis.” Knockoffs are, of course, cheap imitations, not the real thing, but the word also gets in a sly allusion to “whack-off” and “jerk-off,” or maybe that’s just me. It’s intentionally belittling. Biden thumbed his nose at those who would put the Tsarnaevs in a class with Mohammed Atta or Anwar al-Awlaki, let alone Osama bin Laden, and his words set up predictable braying on the right. (I learned about the controversy when I defended Biden’s comments on Joy Behar’s “Say Anything” while talking about my book, and inspired more invective on the right.)

While Republicans try to hype the security breach the Boston bombing represents, to make the case that President Obama is either soft on Islamic extremism or downright friendly to it – a low charge even from a craven opportunist like Rudy Giuliani -- the Tsarnaev brothers still look more like mixed-up lumpen-American killers than hardened terrorists, even though they succeeded in terrorizing and appear to have been driven partly by perverted Islamic fervor. The unbearable Charles Krauthammer even used the bombing to argue that George W. Bush kept us safe, while Obama exposed us to harm, ignoring the fact that 9/11 occurred on Bush’s watch, and so far no one has tied the Tsarnaevs to an international terror plot.

The Sunday shows also featured Republican politicians, most notably House Intelligence Committee chairman Mike Rogers, insisting the elder brother had been radicalized by a trip to Dagestan, Russia, in 2012, while his Cambridge landlady of a decade told the New York Times, “He certainly wasn’t radicalized in Dagestan.”

Two weeks into the Boston bombing investigation, we are still far from understanding the domestic and international forces behind the attack. Yet I’m struck by how much more we know about the Tsarnaev family than about America’s last notorious crime family, the Lanzas, almost five months since the awful Newtown shootings. The two sets of killings were roughly parallel in terms of media obsession, though the Boston story had an edge, thanks to the fact that it disrupted a national media event, involved a charge of terror, and injured so many more people.

The Tsarnaevs’ chosen weapon, the pressure cooker bomb, only killed three people, but wounded almost 300; Adam Lanza’s choice of weapon, a Bushmaster automatic rifle, killed every single one of his 26 targets, minus one lucky child who escaped. The New Yorker's John Cassidy already wrote a great meditation on what might have happened if the Tsarnaevs used automatic weapons, not crude bombs. (Certainly they wouldn't have been charged with possessing "weapons of mass destruction.")

The New York Times and Washington Post both published absorbing and textured narratives about the Tsarnaev family on Sunday. From the Times we learned that Tamarlan’s boxing career wasn’t necessarily cut short by his Islamic radicalization; his giving up boxing also coincided with Golden Gloves leadership deciding he couldn't compete for the national championship because he wasn’t a U.S. citizen. He was the New England regional heavyweight champion for a second straight year – he’d competed for the national championship in 2009 -- when the Golden Gloves association changed the rule to exclude non-citizens in 2010. That’s when he gave up boxing, friends say, and turned more fervently to Islam. It’s too big a jump to blame his radicalization on the Golden Gloves disappointment, but it’s an interesting piece of information about a complicated, hard to fathom man.

From the Washington Post we learn that Anzor Tsarnaev, the brothers’ father, followed his now famous brother Ruslan to the U.S. in 2002, fleeing ethnic and political strife and chasing the American dream. While the family first seemed to thrive, Anzor with an auto-mechanic business and wife Zubaidah giving facials in their Cambridge apartment, things later fell apart. One daughter was busted for dealing marijuana (friends claim Dzohkhar was a dealer, too), Zubaidah was arrested for shoplifting, neighbors complained about Anzor hogging scarce street parking for his car business and stealing from a local auto-parts supplier.

As the family unraveled, Zubaidah became ever more observant, taking to wearing the hijab, while son Tamarlan went from flashy “Eurotrash” night-clubber with a possible boxing career to obnoxious observant Muslim, picking fights over whether Muslims should celebrate American holidays.  He was charged with domestic violence in 2009 but never prosecuted; the next year he married the WASPy Katherine Russell, who dropped out of college, converted to Islam, and apparently supported her husband and daughter with a punishing schedule as a home health aide.

In short, the Tsarnaevs sound like they’d make a great American reality TV series, except for the horrific ending.

With all the rich detail about the Tsarnaevs, I’m struck by how little we know, by comparison, about Newtown killer Adam Lanza’s family. There’s no media conspiracy at work; I’m just wondering about the contrast. Certainly two weeks in, we had nothing like the detail about the Lanza family that we already have about the Tsarnaevs. Clearly one reason (suggested by a reader) is that Adam Lanza left no digital footprints -- he even destroyed his computer's hard drive -- while the Tsarnaevs were all over social media, from Russian social networks to YouTube to Twitter.

Another reason is the Lanzas’ wealth, which made it possible for their dysfunction to fester in private. Nancy Lanza took her son out of school and home-schooled him in her suburban mansion when she became unhappy with his treatment in both public and Catholic schools.  The Tsarnaevs lived in a dense, middle- to working-class Cambridge neighborhood, which meant their neighbors knew their business. Lanza apparently seceded from any public institutions that might have helped her; the Tsarnaevs were known to welfare officials and law enforcement (even before the FBI interviewed them). Early reports that she was a "doomsday prepper" haven't been confirmed, but Lanza's own gun enthusiasm seems at least partly responsible for the killings -- safe in suburbia, she collected guns, and took her disturbed son to shooting ranges.

It’s hard not to wonder whether we pursue reasons for the Boston bombing more aggressively than for mass shootings because one is designated “terrorism,” and the other is just a fact of American life -- not accepted, of course, but not treated as a horrific aberration that requires both explanation and measures to prevent it from happening again. There have been attempts at overviews of the Lanzas’ troubles by various news outlets -- this one by the Courant and PBS's Frontline is about the best -- and the local papers cover new revelations regularly. But we still don’t have anything like the rich, textured narrative we already have about the Tsarnaevs.

It's also clear that we don't generalize from the actions of white killers to reach conclusions about their "group"; the Tsarnaevs' Muslim religion also makes them "other," and more subject to scrutiny. No one has suggested that we study the Lanzas' fractured suburban family life for clues to why their son became a killer. We know far more about Anzor Tsarnaev than Peter Lanza. However, anyone involved in the debate over whether the brothers are white surely enjoyed the Boston Globe's revelation that Tamarlan taunted the Chinese immigrant he carjacked by suggesting that the young man wouldn't remember what he looked like, because "maybe you think all white guys look the same.” Whatever others may think, Tamarlan considered himself "white" in America's ethnic mix.

Investigators may still find a foreign influence behind Tamerlan’s radicalization. This weekend we also learned that the Russian government asked the FBI and then the CIA to keep tabs on the Tsarnaevs because a wiretap found Tamerlan and his mother, as well as his mother and a Russian friend, “vaguely discussing jihad,” according to AP.

But there’s an element of frenzy in our determination to figure out the Tsarnaevs that wasn’t apparent in the media approach to the Lanzas. So far, though, what we’ve uncovered is that the Tsarnaevs were as American as many first-generation immigrants, trying to grab their piece of the American dream, but failing. Anzor returned to his home country; Zubaidah became more religiously observant; their children flailed, and two turned to violence. Republicans are determined to make this a story of global Islamic violence resurgent, but so far, the story is resisting.