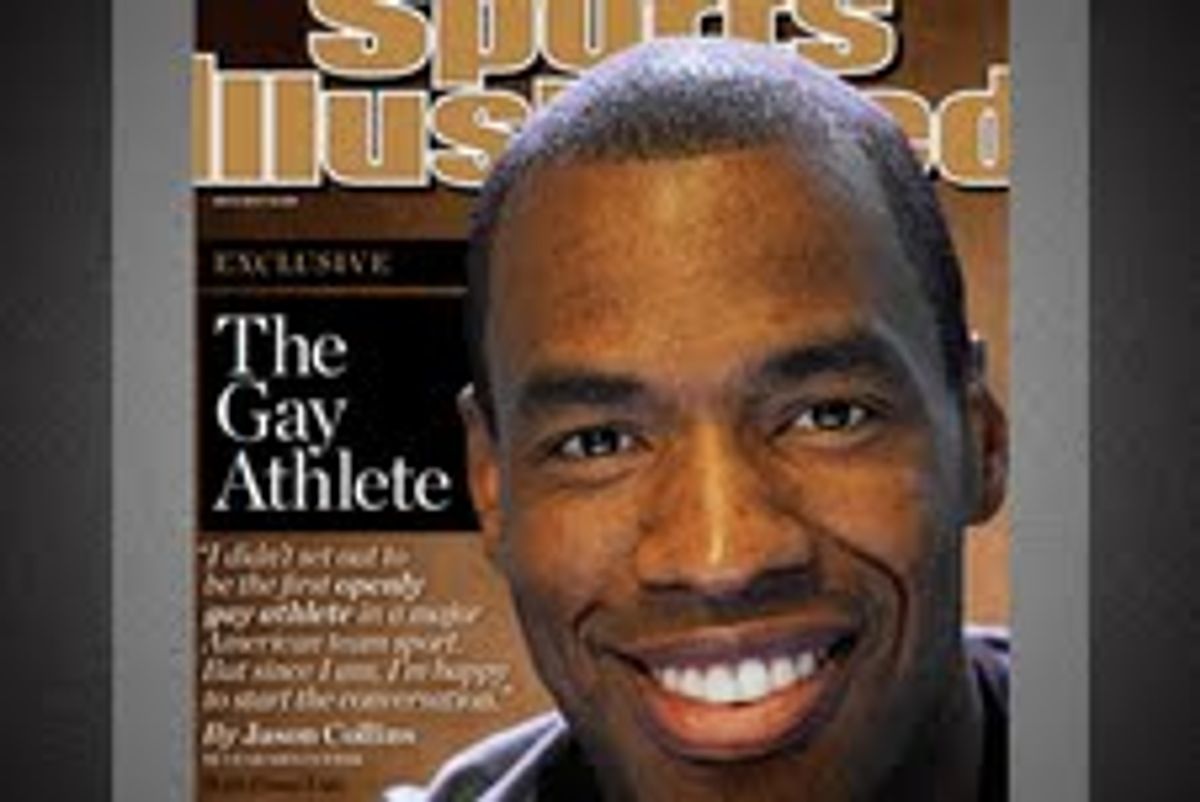 Jason Collins, NBA center and league free agent, came out as gay on the cover of the May 6 issue of Sports Illustrated. He is the first active male professional athlete to do so, making this pretty big news.

In the piece, which begins "I'm a 34-year-old NBA center. I'm black. And I'm gay," Collins goes on to explain that he used downtime during the 2011 player lockout to "confront who I really am and what I really want." He reflected on his family, his teammates and what role he could play in advancing equality for others before finally making the decision to come out, he writes:

I realized I needed to go public when Joe Kennedy, my old roommate at Stanford and now a Massachusetts congressman, told me he had just marched in Boston's 2012 Gay Pride Parade. I'm seldom jealous of others, but hearing what Joe had done filled me with envy. I was proud of him for participating but angry that as a closeted gay man I couldn't even cheer my straight friend on as a spectator. If I'd been questioned, I would have concocted half truths. What a shame to have to lie at a celebration of pride. I want to do the right thing and not hide anymore. I want to march for tolerance, acceptance and understanding. I want to take a stand and say, "Me, too..."

The strain of hiding my sexuality became almost unbearable in March, when the U.S. Supreme Court heard arguments for and against same-sex marriage. Less then three miles from my apartment, nine jurists argued about my happiness and my future. Here was my chance to be heard, and I couldn't say a thing. I didn't want to answer questions and draw attention to myself. Not while I was still playing.

I'm glad I'm coming out in 2013 rather than 2003. The climate has shifted; public opinion has shifted. And yet we still have so much farther to go. Everyone is terrified of the unknown, but most of us don't want to return to a time when minorities were openly discriminated against. I'm impressed with the straight pro athletes who have spoken up so far -- Chris Kluwe, Brendon Ayanbadejo. The more people who speak out, the better, gay or straight.

Collins announcement is a first in male professional sports, but he recognizes that there is still a long way to go to create a more inclusive culture in the locker room. But it's a process he's willing to lead, he says: "Openness may not completely disarm prejudice, but it's a good place to start. It all comes down to education. I'll sit down with any player who's uneasy about my coming out" because, he says, "the most you can do is stand up for what you believe in."

View the cover below: