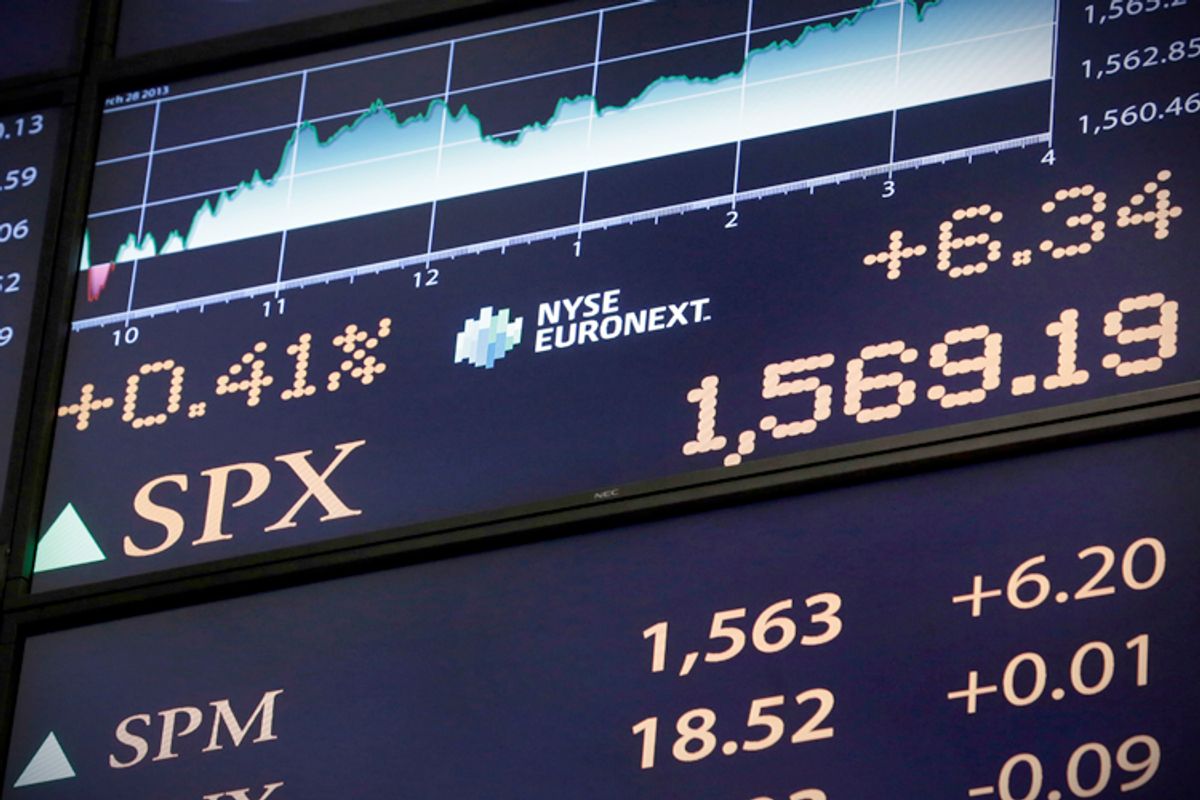 The stock market has recovered all the ground it lost over the previous two weeks, when worries over slower economic growth, falling commodity prices and disappointing quarterly earnings battered financial markets.

"The market has had a terrific run," said Philip Orlando, chief equity strategist at Federated Investors, noting that the S&P 500 is up 12 percent since the start of 2013. "At the beginning of the year, I thought we were going to 1,660 (for the whole year). We're only about 5 percent from that."

A pair of better economic reports gave investors some encouragement. Wages and spending rose in the U.S. last month, and pending home sales hit their highest level in three years.

The Dow Jones industrial average rose 106.20 points to 14,818.75, up 0.7 percent. Microsoft and IBM were among the Dow's best performers, rising more than 2 percent each.

Tech's popularity Monday was a change from earlier this month, when it lagged the rest of the market. Concerns about weak business spending and slower overseas sales have cast a shadow over big tech firms, said Marty Leclerc, the managing partner of Barrack Yard Advisors, an investment firm in Bryn Mawr, Pa.

Revenue misses from IBM and other big tech companies have highlighted the industry's vulnerability to the world economy. But Leclerc thinks tech companies with steady revenue and plenty of cash look appealing over the long term.

Information technology stocks rose the most of the 10 industry groups in the S&P 500 on Monday, up 1.6 percent. It's the only group that remains lower over the past year, down 2 percent, versus the S&P 500's gain of 14 percent.

The number of Americans who signed contracts to buy homes reached the highest level since April 2010, according to the National Association of Realtors. Back then, a tax credit for buying houses had lifted sales. In a separate report, the government said Americans' spending and income both edged up last month.

A handful of companies reported earnings on Monday. Eaton Corp.'s quarterly net income beat Wall Street's estimates, helped by its acquisition of Cooper Industries, an electrical equipment supplier. But the manufacturer's revenue fell short. Its stock climbed 3 percent, or $1.63, to $60.28.

Eaton's results followed a larger pattern this earnings season. Of the 274 companies that have turned in results, seven of 10 have beaten analysts' estimates for earnings, according to S&P Capital IQ. But when it comes to revenue, six of 10 have missed estimates. That suggests companies are squeezing more profits out of cost cutting, instead of higher sales.

The stocks of Moody's and McGraw-Hill, which owns Standard & Poor's, surged following news that the ratings agencies settled lawsuits dating back to the financial crisis that accused them of concealing risky investments. McGraw-Hill gained 3 percent, or $1.45, to $53.45, while Moody's jumped 8 percent, or $4.57, to $59.69, the biggest gain in the S&P 500.

In the market for government bonds, the yield on the 10-year Treasury note slipped from 1.67 late Friday to 1.66 percent, close to its low for the year.