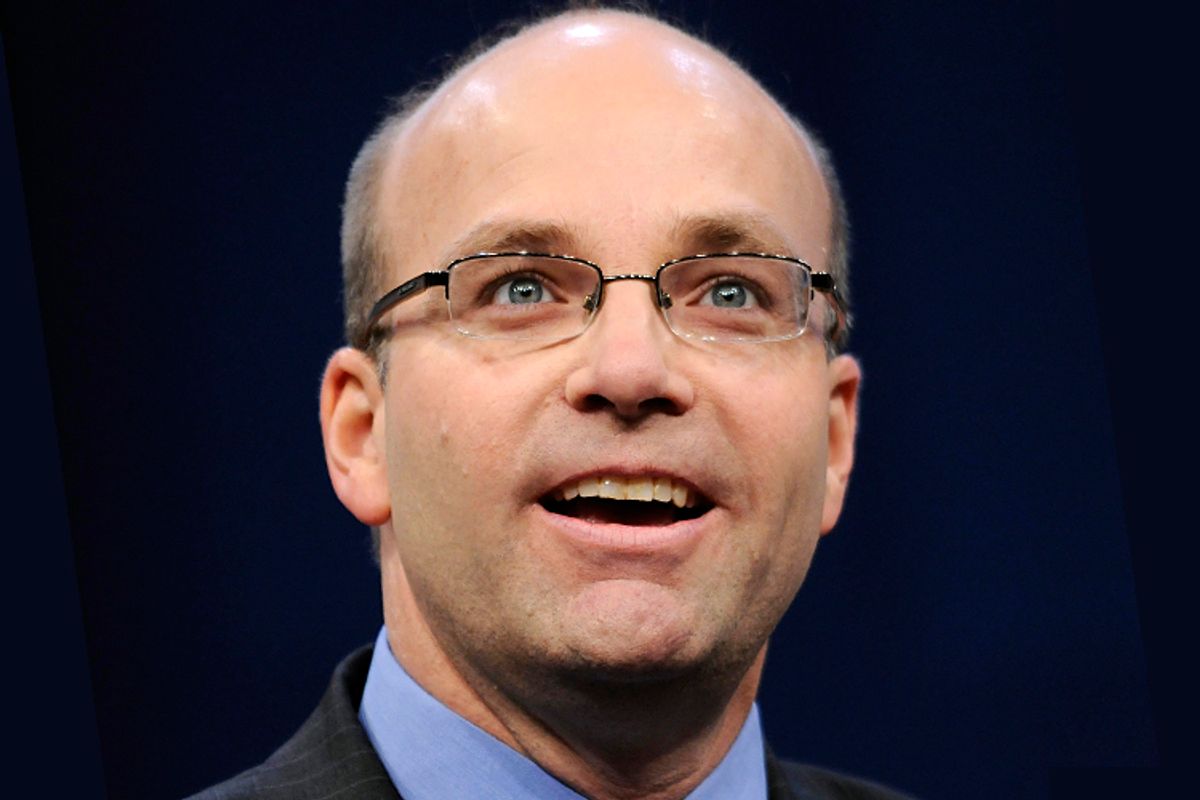 Do not insult the Washington Hilton in the presence of Mike Allen, or Politico's star reporter will launch a multi-day crusade against you in his widely read morning tip sheet.

Conan O'Brien made this mistake while emceeing the White House Correspondents Dinner. "You know, I was worried with the sequester that we would be forced to hold this event at less prestigious hotel than the D.C. Hilton -- then I was told that's not possible," O'Brien said in a riff mocking the aging mid-century modern hotel in Washington's Dupont Circle.

Allen was not pleased. The scribe whose odd obsession with "influence" and Washington power inspired a legendary Mark Leibovich profile cried in Playbook Monday, "Conan O’Brien hurt his buzz" by making "four baseless, elitist cracks about the Hilton, acting as if it were a Motel 5." Allen returned to the subject in today's Playbook, adding that on top of Conan's "bizarre, elitist attack on his hosts at the Washington Hilton," the comedian also eschewed the free room provided by the hotel to instead stay at the Four Seasons.

Why does he care so much? While one might agree with Allen that O'Brien's cracks "disrespected the hard-working servers, who were lined up along the back listening to the remarks" during what must be an incredibly demanding event, the charge of elitism is rich coming from someone who has built an entire brand and career around a carefully cultivated image of "insider" elitism in notoriously clubby Washington. This is what Politico sells, and Allen's Playbook even more so, with its inside jokes, happy birthday wishes to Washington players, and prominent placement of obscure personnel movements inside political firms most people outside the Beltway have never heard of. Allen's other major outlet at Politico is a column called "Behind the Curtain," which is meant to give readers a peak at how "insider" Washington works.

As John Harris, Politico's editor in chief explained, with Allen at his side, in a spoof "House of Cards" episode that played within minutes of O'Brien's speech: "We don't focus on the masses, we focus exclusively on an elite audience." Why anyone who doesn't get paid to care about these things would want to pretend to be a "political insider" is beyond us, but Politico's success speaks for itself (even if questions about its financial stability have been raised).

See, the real offense taken in O'Brien's swipe at the Hilton was not to the hotel's hardworking staff or even the hotel itself, but to the edifice and traditions of official Washington that Allen and Politico seem compelled to defend. "When you’re blessed to be at an amazing event like that, you don’t rag on your hosts," Allen wrote yesterday. "It was all the more clueless because the Washington Hilton is a classic, historic location. Folks hang out on the street, just to watch dignitaries go in."

The Hilton has hosted the dinner, the consummate D.C. insiders event, for years (Politico even published a nearly-2,000-word story about how the hotel prepares for the dinner) and Allen does not appreciate you mocking this storied tradition. Washingtonians get defensive about these kinds of things -- nothing piques our metropolitan inferiority complex like someone from New York or Los Angeles trashing the capitol's sacred institutions -- and Allen is the superlative Washingtonian.

Just last week, Allen and Politico editor Jim VandeHei tried to pre-but a coming onslaught against Washington from Leibovich, whose new book, "This Town," promises to ridicule everything about Washington that Allen and his ilk hold dear. But their pre-response ended up being "the ne plus ultra of Beltway insider nonsense," as Jason Linkins put it. For instance, the column co-authored by Allen referred to Allen as "one of Washington’s top journalists." (And yet, Allen apparently sees no irony in calling O'Brien "out of touch" for poking fun at the Washington Hilton. Nor, apparently, does he see any irony in writing this headline last week: "POLITICO Playbook, presented by the American Petroleum Institute -- HAPPY EARTH DAY.")

Maybe O'Brien's jokes were a bit rude and elitist, but they were jokes. The White House Correspondents Dinner is a roast, and there's always plenty of ribbing to go around. Allen's elitism, on the other hand, is almost always deadly serious.