Mark Zuckerberg won't let me turn off the spammy online dating ads on my smartphone. It's a big mistake 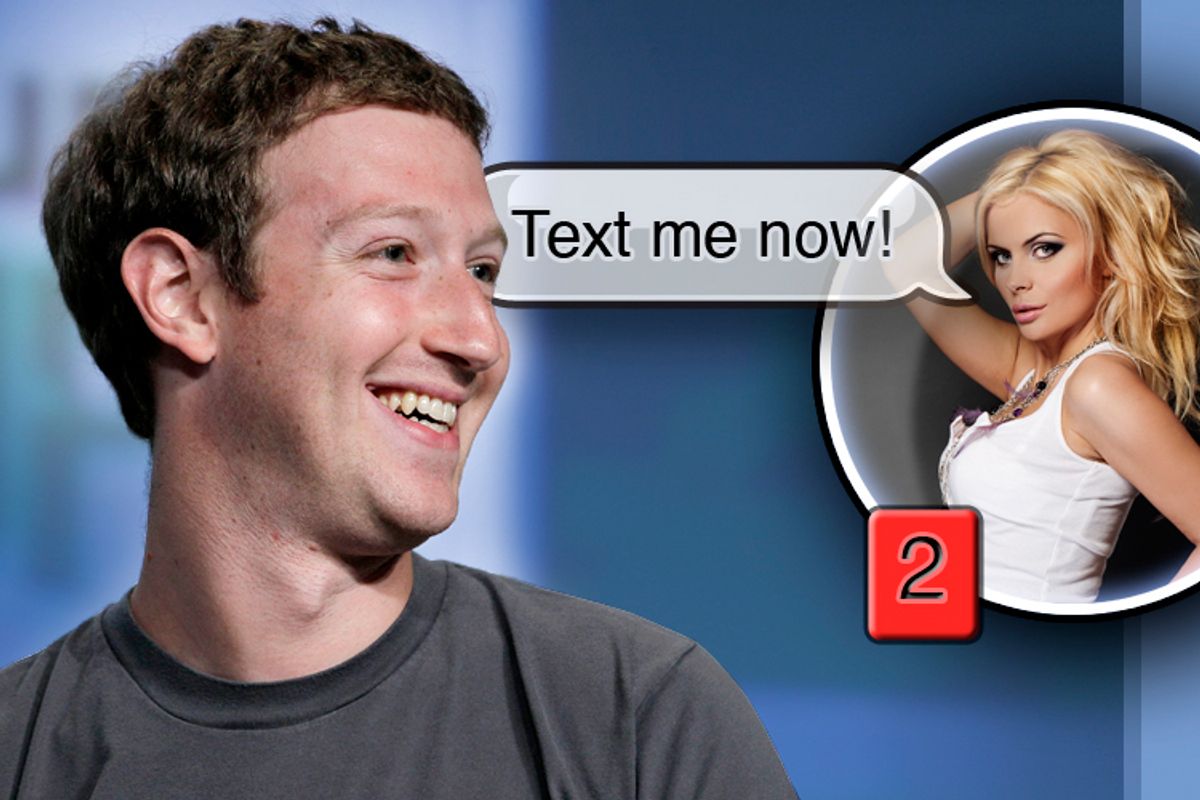 While waiting for my coffee to brew this morning, I checked my Facebook News Feed on my iPhone. But instead of amusing updates from friends and family, in the space of just a few flicks of my thumb, I was assaulted by not one, not two, but three different advertisements for online dating sites. Worst of all, there she was, again! That giant-breasted zombie stalker from Mate1.com who has been chasing me across Facebook for years!

I know she's not real. I know she's just an advertisement. But I'm still terrified of that woman. I have nightmares of getting crushed by her mammary glands, squeezed to death like a boa constrictor kills a wild pig. I don't ever want to see her again, but no matter how I try, I just can't quit her.

When first we met, in my pre-smartphone days, she flashed her soulless come-hither eyes at me from Facebook's right-hand column. I swiftly learned how to click "hide this ad" and "hide all from Mate1.com." I'm a social media take-charge kind of guy -- tweaking privacy and ad settings comes naturally to me. But then, a couple of years later, not long (and not uncoincidentally) after Facebook's IPO, she invaded my News Feed. Once again, I dutifully clicked "hide this ad" and "hide all," albeit this time with a little less faith in the honorable intentions of Facebook's ad-targeting algorithms.

And now she's in my phone. And guess what? In Facebook's mobile app, there is no option to hide all sponsored ads from a particular advertiser. Your only choice is the basic option you have with any kind of post -- you can mark it as spam. Supposedly, reporting posts as spam will decrease the likelihood that you see them, but I'm afraid I've seen zero positive change in the frequency or content of Facebook's sponsored story ads, despite what Facebook claims. Instead I am getting more of the ads I don't want on my phone, after years of telling Facebook I don't like exactly those types of ads. This is not an encouraging trend line.

By the time the first trickle of caffeine had woken up my synapses, I realized that I was done. I had reached my tipping point. I no longer want to check Facebook on my phone. I'm sorry, Mark Zuckerberg, but my iPhone screen is just not big enough for those breasts.

And the earth shook. Nay, the very heavens trembled, and the gods on Mount Olympus sat uneasy on their thrones. Because if little old me no longer wants to check Facebook on my phone, then it's high time for Zuckerberg to cash in his stock options. Because Facebook is doomed.

Facebook is blowing it. I am not opposed to online advertising. I understand that everyone needs to make a buck, and there will always be a price to pay for "free" services. I am totally cool with that. The truth is, I have actually always been hopeful about the prospect for well-targeted online advertising. For example: I am an avid cyclist -- I post on Facebook about cycling-related stuff all the time. I would not mind in the least if my News Feed was interrupted with ads alerting me to good bargains on cycling gear. Are you listening, REI?

But in general, I do not talk about my romantic life on Facebook. I have certainly expressed zero interest in online dating services for the entire time I've been on Facebook. Quite the contrary, I have done everything in my power to actively indicate to Facebook that I do not want to see ads for online dating services. Seriously! They make me feel bad! Facebook's algorithms seem to have decided that I am so desperate for female companionship that by far the best way to monetize my attention is to encourage me multiple times a day to seek a hookup with women who seem to have only one significant distinguishing characteristic. This affronts me, both on my own account and for my entire gender. Does Facebook really think so little of me? Am I not man enough to seek my own romantic path without Facebook's help?

Facebook's complete and utter failure to understand how best to target me is bad enough. Facebook is supposed to have the most comprehensive picture of my likes and dislikes, and yet it can't figure me out, at all. It's just spamming me based on my relationship status. But the company's incompetence is disastrously compounded by its decision to give its users less freedom in configuring their mobile Facebook experience than is true for the desktop. By default, Facebook is declaring that the mobile experience will be more constrained, less user-friendly, and significantly more obnoxious.

That’s a big deal. All the available data indicate that we are increasingly accessing the online world through our phones. The migration from desktop to smartphone has happened stunningly fast. I've been right there every step of the way, for the same reason as everyone else. It's super-convenient! I enjoy catching up with my daughter while I'm standing in line at the grocery store. It feels like a minor life enhancement.

Or at least it did until this morning, when convenience and utility were trumped by annoyance and disgust. This morning, I realized that the next time I was waiting for my coffee to brew, I would be more likely to click on a different app to satisfy my endless craving for distraction.

That may sound like a little thing, hardly the justification for a blustering, unhinged rant. But for me personally, that moment of annoyance marked a tipping point -- the first time I looked at my phone and saw a jail cell, instead of a wide open frontier. If my behavior is in any way representative of other Facebook users, then Mark Zuckerberg is steering in the wrong direction. Any online service that depends on advertising revenue for the bulk of its profits must figure out how to generate cash from mobile eyeballs. But it must do so without pushing users away. Facebook's entire financial future depends on making the mobile experience captivating, not aggravating. If Facebook continues to clog up our News Feeds with badly targeted advertisements while allowing us less opportunity to indicate what we consider acceptable, our eyeballs will go elsewhere. Mine may be already gone, thanks to one too many iPhone invasions by the big-breasted Mate1.com stalker zombie from hell. (Who is probably a perfectly nice person in real life.)