We live in the Age of Trauma

Every generation has a diagnosis that defines them. Ours is PTSD, and the treatment is far more complex than a pill 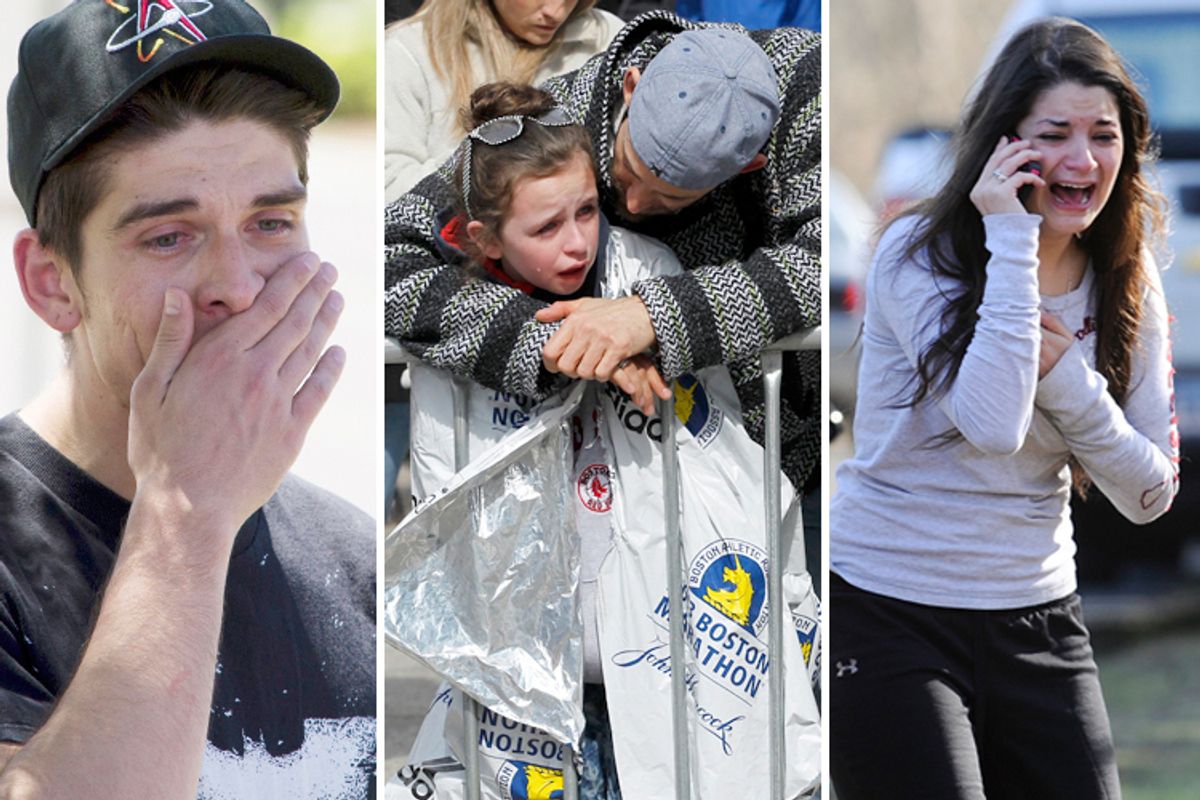 I was in Boston two days before the bombings, with my family at an Indian restaurant not far from the soon-to-be crime scene at Copley Square, and we were surrounded by runners loading up on carbs. It was an unusually warm and pleasant night here in New England, where we’ve had one of the latest springs on record, and there was an air of excited and happy expectation about the place.

Then the bombs went off, and the trauma set in.

Each American generation has its characteristic psychiatric diagnosis, and, typically, a drug or medication that represents the times. When the world was on the verge of blowing up in the Dr. Strangelove 1960s, we lived in the Age of Anxiety. Valium, the drug that symbolized that period, was celebrated in books and movies like "Valley of the Dolls" and songs like the Rolling Stones’ "Mother’s Little Helper." The 1970s was the Age of Malaise, and the drug that attempted to mediate that malaise was cocaine. Starting in the Prozac-fueled late 1980s and 1990s, the omnipresent diagnosis was depression. Later, the diagnosis was attention deficit disorder and the representative drug was Adderall.

If this is so, the appropriate diagnosis of the last decade -- since Sept. 11, 2001, to be exact -- may be PTSD: post-traumatic stress disorder. Of course legions of American soldiers have received the diagnosis, and enormous resources, appropriately, have gone into its treatment. The Department of Veterans Affairs estimates that nearly 30 percent of the more than 800,000 Iraq and Afghanistan War veterans treated in veterans' hospitals and clinics are diagnosed with PTSD.

But in the past 10 years, even non-veterans have been engaged in an ongoing narrative of American trauma. After 9/11 came Katrina, then the economic meltdown and the recession that never seems to end. This past year saw Sandy followed by Newtown. Along the way there’s been the mass killings at Virginia Tech, at Northern Illinois University, and in a Colorado movie theater. There also seems to be a deepening sense that one can never fully escape from potential catastrophe, not on a Boston street on a promising spring day or in a Connecticut elementary school a few weeks before Christmas.

In the popular perception, the locus, both psychologically and geographically, of the tragedies has shifted. They’ve gone from being "out there" -- in, say, the remote parts of the South or West, or the inner cities -- to "right here," in respectable, suburban America. The latest chapter is the bombing in Boston, with its indelible images -- the 70-year-old runner laid out on the ground; the impossibly innocent smiling face of the 8-year-old boy who was killed. And it further cements post-traumatic stress in the popular psyche and lexicon in a similar way in which depression, bipolar disorder and ADD -- and the drugs to treat them -- were popularized in earlier eras.

Yes, PTSD is the reigning diagnosis of the day. But unlike other diagnoses in other eras, there is no clear drug and no definitive way of treating PTSD. By its very nature, the whole business is messy and complicated. But what is clear is that the long-term toll of trauma, both psychological and financial, is stunning. According to Harvard’s Linda Bilmes, “The peak year for paying disability compensation to World War I veterans was in 1969 – more than 50 years after Armistice. The largest expenditures for World War II veterans were in the mid 1980s.” Payments to Vietnam veterans have not yet reached their highest point. Trauma transpires on a near endless battlefield.

The current prevalence of “PTSD” is striking, particularly because it did not exist as a diagnosis until 1980. There were, of course, earlier terms to describe the psychological aftershocks of war trauma -- in the Civil War, the wonderfully evocative term “Soldier’s Heart” was used; during the World Wars, “shell shock”; in the 1950s, “gross stress reaction”; in the 1970s, “post-Vietnam syndrome.” Somewhere along the way there was also “going postal.” But it was not until 1980 that the American Psychiatric Association, largely as a result of lobbying from Vietnam veterans, codified PTSD as a formal diagnosis.

While the diagnosis filled an important niche for psychiatry, there were, according to the eminent psychiatrist Nancy Andreasen, “unintended consequences.” As the diagnosis took stride, the concept of PTSD “was steadily broadened … to include stressors that were not intended for inclusion (e.g., auto accidents, childhood abuse.)” The allowable time frame between the stressful event and the onset of symptoms became ever longer, such that delayed onsets became the norm. As a result, “the diagnosis, assumed to be relatively rare in peacetime, became much more common.” Or as psychologist Paul-Lees Harvey said in 1986, “If mental disorders were listed on the New York Stock Exchange, PTSD would be a growth stock to watch.”

It is not for me to judge how any particular person reacts and attempts to recover from a particular traumatic event. But surely there is a difference between the trauma associated with D-Day, victims of rape and sexual abuse, those directly hit by the bombings in Boston, and the rest of us?

Part of the issue is linguistic, the all-too facile throwing around of diagnostic terminology that is awfully bland and nondescriptive. What William Styron wrote about the insipidity of the term “depression” -- “the word has slithered innocuously through the language like a slug, leaving little trace of its intrinsic malevolence and preventing … a general awareness of the horrible intensity of [Major Depressive Disorder] when out of control” -- is now true of PTSD. PTSD has gone rather quickly from its origins as a strictly war-related diagnosis to linguistic shorthand for anything bad that happens. “PTSD” has been doing a lot of slithering lately.

The medicalization of trauma has its own consequences. Diagnoses require treatment, which is typically a drug. The first-line treatment of PTSD is often anti-anxiety medications. These drugs are everywhere: college students, who grew up with these medications, seem to think that taking an Ativan is just about on par with drinking a Diet Coke. Drugs like Ativan work -- in the short-term, anyway -- really, really well. They make you feel much less anxious very quickly, and many times their use is beneficial and appropriate. But their very effectiveness allows us to avoid the root causes, both individually and societally, of our suffering. Benzos are also highly addictive. And so one can replace anxiety with a worse thing: dependence.

The emphasis on the immediacy of response to trauma can be problematic, too. The research shows that grief counselors who swarm upon victims of trauma do not do much good for most people. The enduring effectiveness of massive victim’s funds and celebrity-driven concerts and fundraisers, however well-intentioned, remain unclear to me. Short-term psychological treatments for trauma, while they can be effective, do not do justice to the fact that lasting recovery from harrowing experiences usually involves a decades-long process. Judith Herman in the classic “Trauma and Recovery” identifies three stages of recovery from true PTSD. The first involves the establishment of safety. The second, “remembrance and mourning,” involves the reviewing of memories to lessen their emotional intensity, and experiencing grief about what has been lost. The last stage involves reconnection with community.

All of that requires time. Moe Armstrong, a vet who received the Navy Commendation Medal for saving fellow soldiers while under fire in Vietnam, is still recovering nearly 50 years later. He is now in his late 60s, and he suffers daily trauma symptoms. He doesn’t sleep a lot, and recently had to be restrained at his gym when the sounds of the exercise machines reminded him of combat. But Armstrong has used his experience to found Vet to Vet, a peer counseling service for veterans with PTSD. Unsurprisingly, he’s been very busy in recent years counseling soldiers coming back from our latest wars. The progress he has achieved he attributes to years of hard work, sobriety, meditation and helping others.

A week after the marathon bombings, Boston -- or large parts of it anyway -- was happy again. Or at least Boston was “strong,” as the placards at Fenway Park proclaimed. David Ortiz, the Red Sox slugger, took the microphone before a game, and told the crowd, “This is our fucking city. And nobody is going to dictate our freedom. Stay strong.” Ortiz, returning from a long injury, played well; the Red Sox won; the mayor and governor were congratulated; Neil Diamond sang “Sweet Caroline” in the outfield; and the FCC applauded Ortiz’s use of profanity.

Everything was all right with the world. Except that it wasn’t. Things were absolutely not all right with the more than 260 people directly hit in the blast. Their journey -- one that will include multiple operations, therapy, grief and mourning, and someday perhaps, reconnection -- was just beginning. The killed, the wounded, and the psychologically maimed: the true soldiers of the Age of Trauma.