Unpacking his hateful remarks about Jason Collins, and why it's in our best interest to simply ignore them 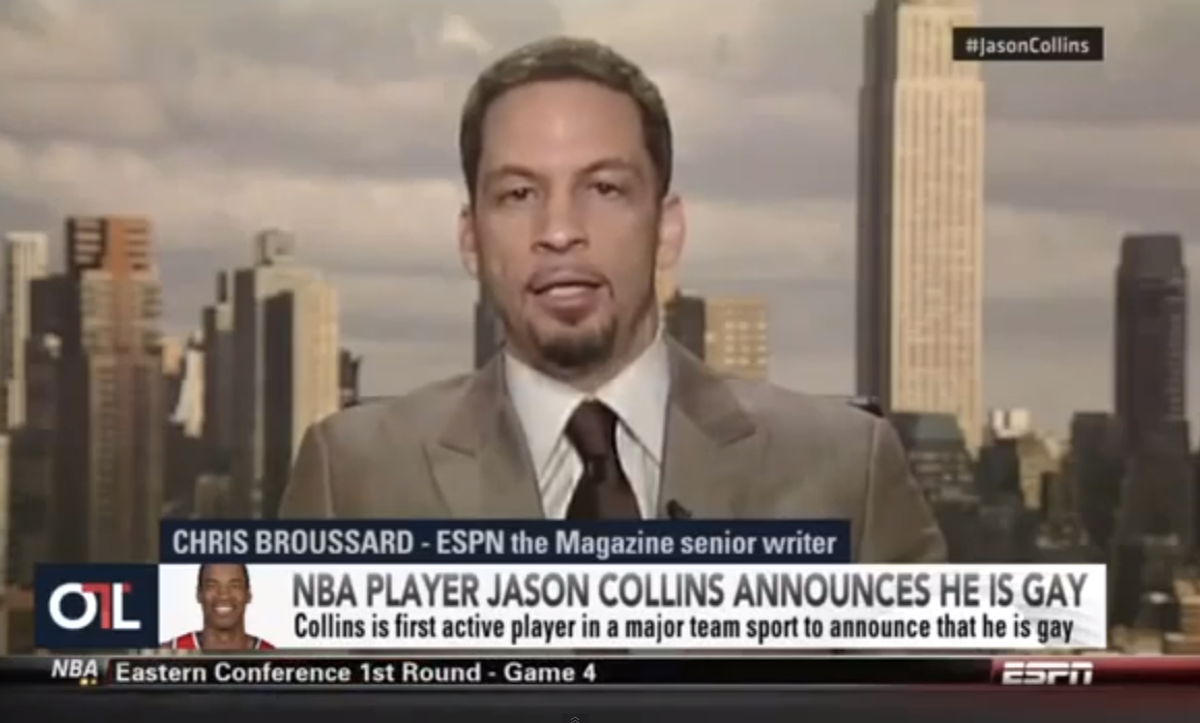 Earlier today, Jim Cavan made the case that Chris Broussard's (very unpopular) opinion on Jason Collins' decision to come out as gay does, in fact, matter. This is a mostly ad hominem (towards Broussard, not Cavan) counterpoint to that.

David Roth: And Tim Brando! No one wants to hear his truth because he's white and old and successful, and that's not worth a damn thing these days. I've always thought the big issue with regard to how gay athletes was how it made random television guys feel. Are they proud? Are they angry? We need to know about this, it's the most important thing.

Brendan: Really interesting to hear Broussard's thoughts on adultery and children out of wedlock as it relates to gays. Really looking forward to his #TruthToPower moment on all the other sinners he's covered.

Brendan: He should be fired, but I'm guessing he won't be.

David: I don't know if he needs to be fired. He didn't say Collins was horrible or disgusting or whatever. He basically just said "I'm a fucking idiot" in a more grandiose and roundabout way, the same way Brando just found an excuse to air out some musty soul-fart about a rich white guy not being worth anything these days.

Brendan: But that's not a real defense, I don't think. And I think, actually, that's exactly what Broussard did say. He's hiding his bias behind his religion and at the same time putting it forward as a basis for his beliefs—you can't have it both ways. Just because he has some facile justification for his bigotry doesn't make him not a bigot.

David: Him being a bigot could be seen as a personal choice in this case. It's possible to be a Christian and not be a bigot. Most people are! These two guys are apparently not.

Brendan: He's also terrible at his job. But I guess that's another thing.

David: Right, that's the bigger issue. And this doesn't make him MORE terrible at his job. I think it's possible to believe what he believes and do his job well, and be a good person in terms of how he treats others, etc. And I'd hate to see someone get fired for what s/he believes, even if s/he believes something I think is total vile bullshit. Although considering that it's still legal in many states to fire people for being gay—which, unlike being a fucking idiot, is not a choice—maybe I'm worrying about the wrong thing?

Brendan: Firing may be over the line, here, actually. But they've suspended dudes for less. Anyway, what bugs me is bigotry hiding behind religion. It's miserable and these a-holes should be called out on it. And a normal workplace—saying shit like that in a public forum is questionable in the ten or so states with workplace protections for gays. Although obviously in this case, putting him on TV and asking him the question, it was his job to say really stupid shit. So that may be defensible in that he's doing his job?

David: Ugh. All part of the "debate."

David: Also there's also no debate, here. No one cares what this doofus or Tim Brando or whoever thinks about whether it's good or bad to be gay or whatever. No one cares what they think about anything outside their jobs. It's amazingly tacky that ESPN would try to jam it into the usual binary. That and all these columnists being like "I'm glad about what he did, if you were worried about my opinion" are hilarious. Way to keep it in perspective: what matters about this is definitely the FEELS it gives you, or your cornball bible quotes.

Brendan: Another problem: Broussard seems to think not burning gays or being outwardly hateful is tolerance. And that's lazy, and a deal-breaker for me.

David: There's also what seems to me a really solid Christian argument for NOT being that way, for starting with love and a deeper tolerance. Matt Yoder, from Awful Announcing, wrote a nice thing on that. Gregg Gethard, who's written for us here, did the same thing from a Catholic perspective at The Diss, and Spencer Hall did it from an atheist's POV. There are so many ways, including a great many overtly Christian ones, not to be a dick about this!

Brendan: Yoder's emphasis on God's grace feels better to me, but I just don't fully get it either. That's my problem, I guess.

David: It's all sort of abstract to me, too. That perspective just isn't mine. But if you start with a basic humanism—treat people well, start from love and stay there—then it still is just hard for me to see how a serious person could so coldly and almost offhandedly condemn a bunch of other humans.

Brendan: I definitely get the desire for forgiveness and redemption, I'm not antagonistic to that. And Yoder's basic premise—that hating/judgment is easy and love is hard—is the basic humanist impulse that really resonates with me. It's what I like about David Foster Wallace, and it's absolutely the part of Christian values that's most appealing to me.

David: And here's Bubba Watson tweeting thanks to Chris Broussard. Man, it'll be depressing to watch this all take shape as some Liberal Media backlash narrative. Broussard becomes some sort of hero to America's foremost grievance-farming dipshits. Tim Brando's already climbing up on that cross.

Brendan: I don't even know who's left. I even think Fox is maybe ready not to be anti-gay? Maybe not. But yeah, the backlash thing is all they have, make it about who's The Real Racists or whatever.

David: Same old argument, but Mad Libs-ed to take some of the proper nouns out and replace them with different names/hot-button issues.

Brendan: And make Broussard the new Juan Williams—who I concede was probably treated inappropriately, even though his beliefs were also bigoted and dumb. Which I guess is the equivalency thing.

David: Same sort of thing, totally. He said some dumb shit, but the real problem was that Juan Williams was crappy at his lame job. That's the issue with Broussard, finally. There are so many people better at it than him. If they're able to talk about a big moment in sports history without making it about themselves, all the better.

Brendan: I do sense that he was sort of suckered into it too. I mean, ESPN had to know that's what he was going to say.

David: They formatted it like a debate! There aren't two sides to this shit. It's not McShay and Kiper fake-bickering over some three-technique defensive tackle and trying to keep from laughing. Why try to make it like that?

Brendan: I wonder at what point they'll feel a sense of embarrassment about this.

David: Long after the last asshole realizes other peoples' sexuality isn't his business?