Would we give up burgers to stop climate change?

A new report suggests that adjusting our diet can slow global warming. Now let's see if our politics will let us 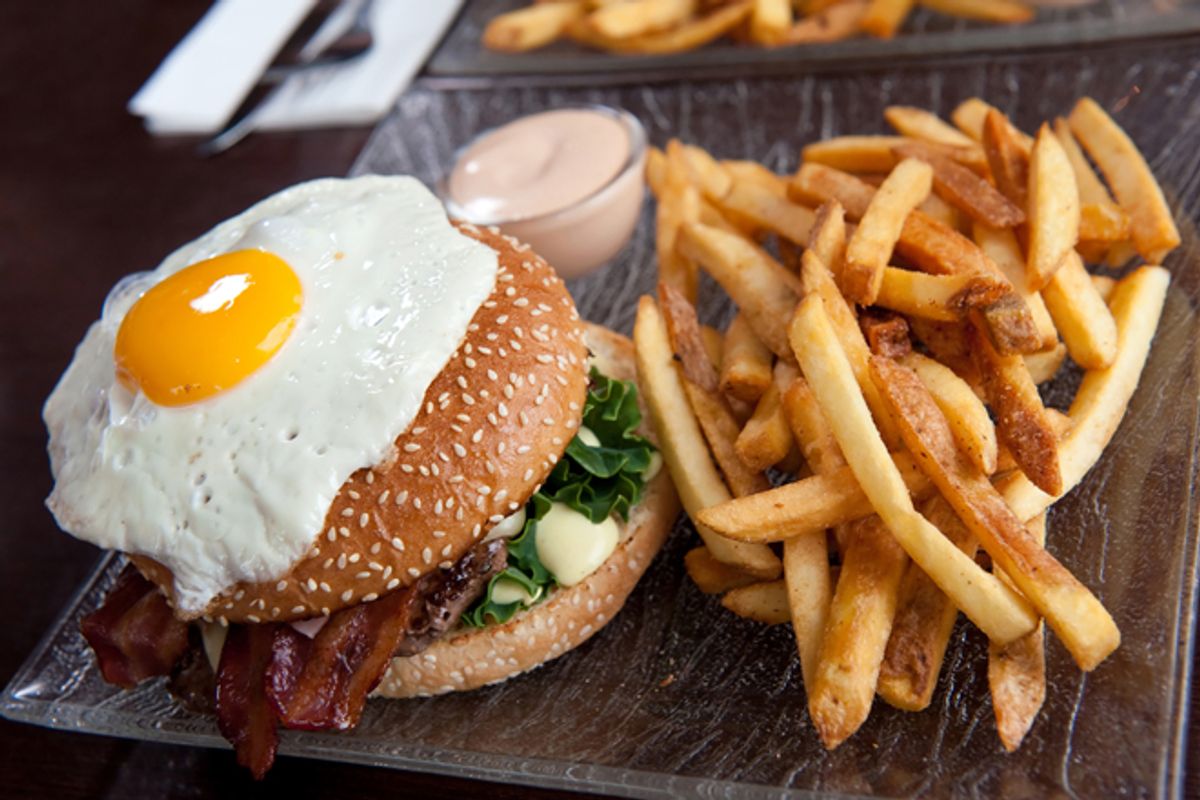 In case you missed the news, humanity spent the Earth Day week reaching another sad milestone in the history of catastrophic climate change: For the first time, measurements of carbon dioxide in the atmosphere surpassed 400 parts per million, aka way above what our current ecosystem can handle.

Actually, you probably did miss the news because most major media outlets didn't cover it in a serious way, if at all. Instead, they and their audiences evidently view such information as far less news-, buzz- and tweet-worthy than (among other things) the opening of George W. Bush's library and President Obama's jokes at the White House Correspondents Dinner.

Such an appetite for distraction, no doubt, comes from both those who deny the problem of climate change and those who acknowledge the crisis but nonetheless look away from what feels like an unsolvable mess.

That sense of hopelessness is understandable. After all, some of the most hyped ways to reduce carbon emissions -- electric cars, mass-scale renewable energy power plants, etc. -- require the kind of technological transformations that can seem impossibly unrealistic at a time when Congress can't even pass a budget.

Here's the good news, though: The fastest way to reduce climate change shouldn't seem impossible, because it requires no massive new investments, technological breakthroughs or long-term infrastructure projects. According to data compiled by former World Bank advisers Robert Goodland and Jeff Anhang, it just requires us all to eat fewer animal products.

In their report, Goodland and Anhang note that when you account for feed production, deforestation and animal waste, the livestock industry produces between 18 percent and 51 percent of all global greenhouse gas emissions. Add to this the fact that producing animal protein involves up to eight times more fossil fuel than what's needed to produce an equivalent amount of non-animal protein, and you see that climate change isn't intensified only by necessities like transportation and electricity. It is also driven in large part by subjective food preferences -- more precisely, by American consumers' unnecessary desire to eat, on average, 200 pounds of meat every year.

If you find it demoralizing that we are incinerating the planet and dooming future generations simply because too many of us like to eat cheeseburgers, here's that good news I promised: In their report, Goodland and Anhang found that most of what we need to do to mitigate the climate crisis can be achieved "by replacing just one quarter of today’s least eco-friendly food products" -- read: animal products -- "with better alternatives." That's right; essentially, if every fourth time someone craved, say, beef, chicken or cow milk they instead opted for a veggie burger, a bean burrito or water, we have a chance to halt the emergency.

The trouble, of course, is that environmentalism and conservation -- like everything else -- have been unduly politicized. Consequently, opposing those once-universal values now seems to be viewed by many on the right as a constructive expression of patriotic defiance. Indeed, according to one recent study, many self-described conservatives will refuse to buy a green product once they see it marketed as being environmentally responsible. Similarly, another study shows that conservatives are prone to consume more energy when warned that they are already using a lot.

In light of that, I'm sure some conservatives will read this column and send me email smugly pledging to eat even more meat than they already do, just to make some incoherent point about freedom. What they will really be proving, though, is that no matter how straightforward a climate change solution may be, we will never be able to combat the crisis until everyone is willing to sacrifice just a little bit, and nobody pretends ecological survival is anything other than what is: an apolitical, transpartisan priority.