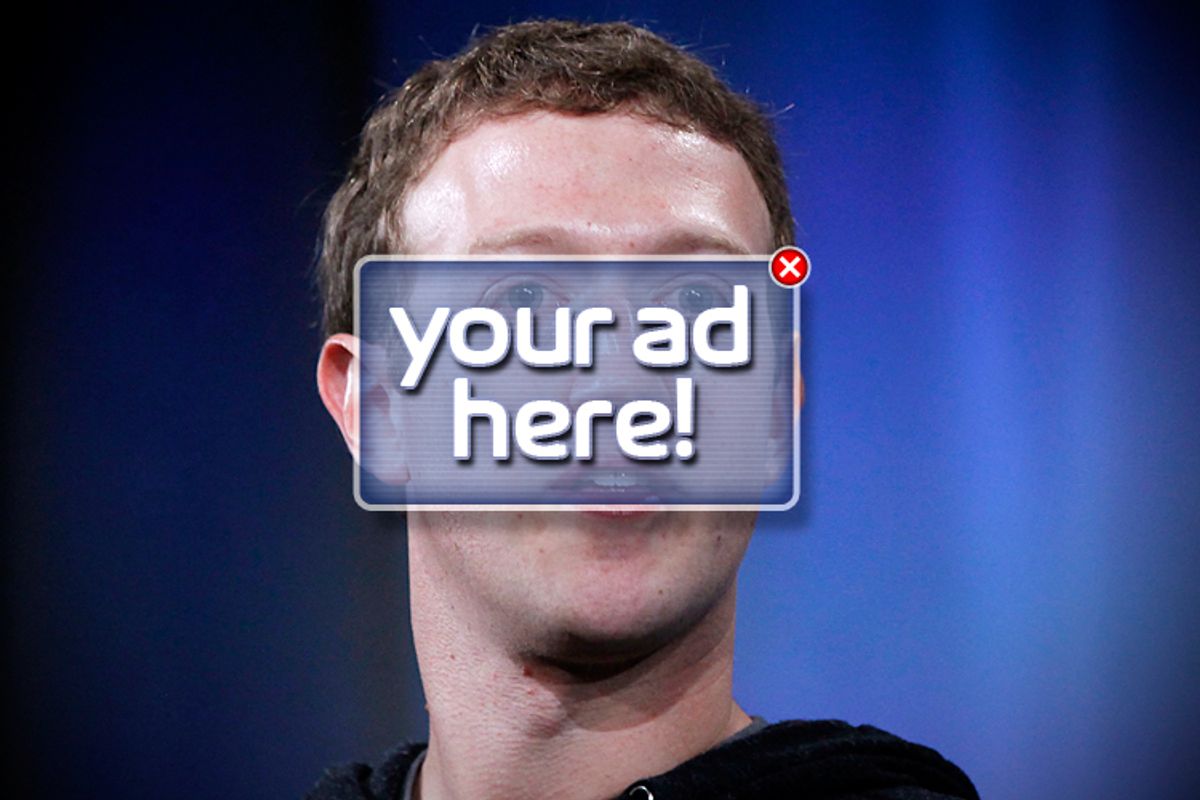 I received an email from a Facebook public relations person just a little before midnight Wednesday, or about 10 hours after I posted my rant about Facebook mobile advertisements and giant-breasted zombie-stalkers. The spokesperson sought an opportunity to chat about the work Facebook was doing "to improve the controls people have over the ads they see on mobile."

So we chatted. The big news: Facebook promises that within just a couple of weeks mobile users will get new controls that will allow us to block specific advertisers. These controls will be similar to those that currently exist for the desktop Facebook experience. Individual Facebook users can decide for themselves how excited they are by this pledge. As I wrote on Wednesday, Facebook's track record on the desktop advertising experience leaves something to be desired. (To be fair, Facebook's spokeperson acknowledged that the company's ad-delivery algorithms are not "perfect.")

The more important news is Facebook's decision that it needed to respond to my blog post at all. If you want proof that how users feel about mobile advertisements is the single most critical issue determining Facebook's future, that midnight email from P.R. is a valuable indicator. I've written about Facebook many times for Salon. Last night was the first time Facebook sought me out after a story was published.

I look forward to better controls over Facebook's mobile ads that will aid me in my doomed quest to eradicate all online dating propositions. But I certainly don't expect the kind of control that will eliminate every trace of ad-related aggravation. The seething paradox at the heart of Facebook is that for the social network to justify its market valuation and deliver its investors the returns that they crave, Facebook must shovel a whole hell of a lot of ads at its users. Therefore, Facebook can't make it too easy for Facebook users to block unwanted ads. To do so would be suicidal. Facebook's challenge is to find the proper balance between giving users the best online experience possible and maximizing advertising revenue. That's a hard problem to solve -- as everyone in any business dependent on online ad revenue will acknowledge. But it may be particularly hard for Facebook. It might even be impossible. Facebook is successful because it excels at making it easy for us to share information. We breathe, we share. There's no friction. Nothing gets in the way. Except for the ads. Which, by their very nature, must get in the way. When your revenue model directly contradicts the essence of what your site delivers to users, you've got a big problem.

On Wednesday, at around the same time I was getting my rant on, Facebook released its quarterly earnings numbers. Most news accounts led with the figure everyone is watching: 30 percent of Facebook's revenue came from mobile advertising, up from 23 percent in the same quarter last year. The numbers exceeded investor expectations. The New York Times' Somini Sengupta suggested they "offered early signs that the company was cracking the mobile revenue code."

In the earnings call held to discuss the results, CEO Mark Zuckerberg described himself as "pleasantly surprised" by how Facebook's internal monitoring indicated that mobile users were not being driven away by the increasing flow of ads.

"What we're seeing is really positive and better than expectations. We assumed sentiment and satisfaction might drop some amount and we continue to watch it really carefully because there’s no guarantee it won't in the future. But so far, what we see has made us confident there’s more we can do with advertising over time and we can ramp that up."

I'm going to place Zuckerberg's statement in the category of "things CEOs have to say during earnings calls to avoid a massive stock price disaster." Any sign that Facebook lacked confidence in the future of mobile advertising would be cause for thermonuclear meltdown. Then again, I don't have access to direct data that refutes Zuckerberg's claim that users are not being put off by intrusive ads. All I've got is anecdotal evidence and my own gut response to the deluge of dating ads I saw yesterday morning. I have a pretty high tolerance for online advertising. If I get annoyed, I assume that the masses in general are ready to start hoisting pitchforks.

But there's also some doubt that Facebook's earnings are truly cause for celebration. Chris Mims at Quartz looked at Facebook's numbers and saw a wealth of warning signs. Perhaps most important: Revenue per user dropped sharply in the U.S. and Canada, Facebook's sweet spot: "where Facebook is the most well established, has the deepest relationships with advertisers, and should be increasing revenue per user. If, that is, the company’s plans were working as promised."

Mims also observes that there is a big difference between how Google users and Facebook users perceive advertisements. "The difference is that while Facebook is pushing banner ads and product endorsements in between conversations with friends, in a way that can feel intrusive, Google’s ads arrive just when people are amenable to hearing their sponsors’ message."

In other words, Google users are often searching for things that they are willing to pay money for, while Facebook users are logging on primarily to connect to friends.

Mims' insight is crucial for understanding Facebook's paradox. Facebook is a success, as Alexis Madrigal wrote eloquently in a contemplation of Facebook's design aesthetic in the Atlantic on Thursday, because it "has created the most efficient engine for sharing, archiving, and monetizing text and pictures that the world has ever known."

That efficiency is predicated on not getting in the way. Madrigal reports how Facebook has been stockpiling an astonishing reservoir of top interface designers, all of whom, presumably, are dedicated to making the user experience on Facebook as sublime as possible. The challenge to facilitate, instead of obstruct, is so deeply embedded in Facebook's design aesthetic that Facebook's top design executive has elevated it to transcendental importance.

One day in March, I was sitting across from Facebook's design director, Kate Aronowitz, at 1 Hacker Way in Menlo Park when she told me, "It takes a lot of work to create the perfect empty vessel." In this near koan, lay a design philosophy and an explanation. Facebook as a series of beautiful empty vessels into which users pour their text and photographs, hearts and minds.

Oh my goodness! Facebook created the perfect empty vessel and then stuffed it full of online dating bimbos! That's a Zen heart attack, a seamless interface broken up by the San Andreas Fault, a discombobulation so profound I can barely cope with its self-negating magnificence. Do you see the problem here? The better Facebook gets at facilitating my "frictionless sharing" with my friends, the more jarring every badly targeted ad becomes. Success breeds failure. Our hearts and minds do not fit neatly in vessels filled to overflowing with ads for Candy Crush.

The only answer here is for Facebook to perfect ad targeting to the point that the site delivers to us only those commercial pitches that we really do want. I'm talking nirvana here, a perfect union between our desires and our reality, an empty vessel filled with the blissful satiation of our needs.

Show me that ad, and I might not block it.