In wake of the garment factory tragedy, here's what ethical clothing consumers can do via the global supply chain 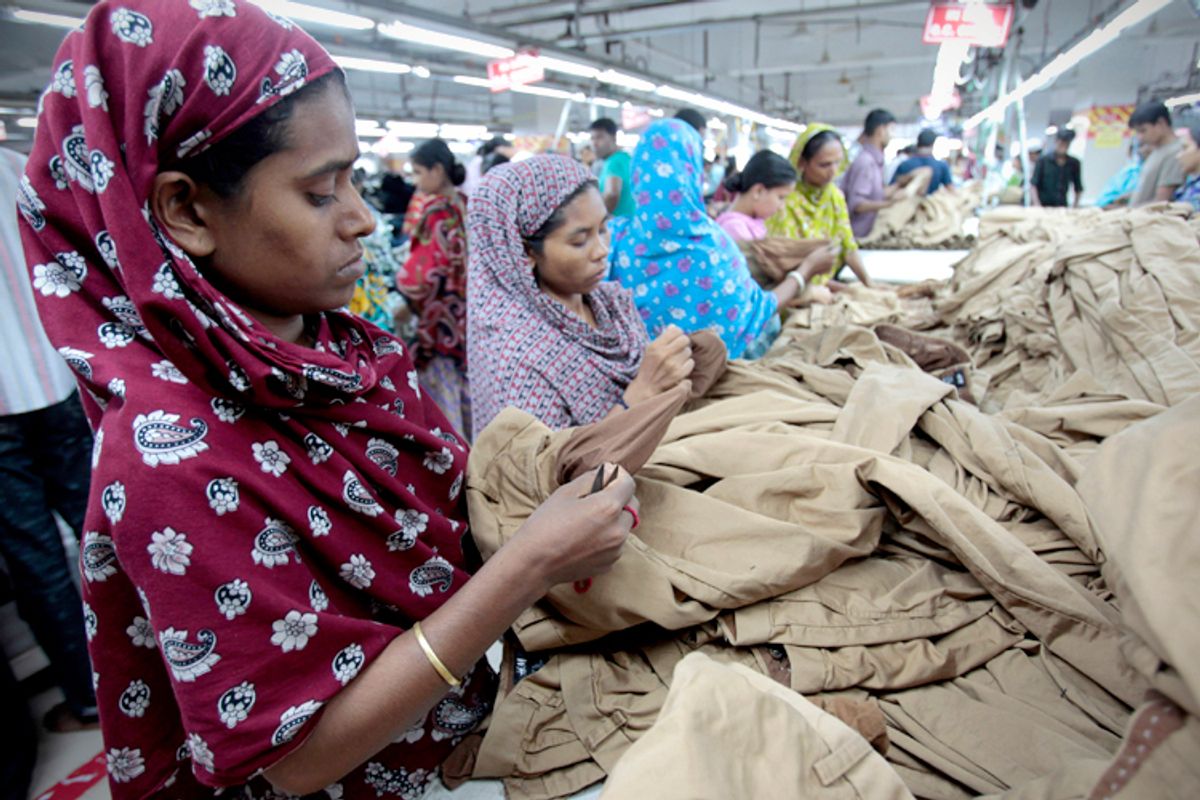 While rescue workers continue to dig through the rubble of Rana Plaza, the collapsed Bangladeshi garment factory responsible for the deaths of 433 people (and counting), Americans are faced yet again with the stark reality of consumer culpability in these disasters.

Major clothing retailers like Wal-Mart, Joe Fresh, JCPenney and the Children's Place were each found to have subcontracted manufacturing to the crumbling factory in Savar, where workers were making an average of $38 a month and coerced to report to work even after the walls of the building were literally falling apart. In November, fire ravaged another garment factory near the capital city of Dhaka, leaving 112 dead. Again, pieces of clothing from Sears, the Walt Disney Co. and other major retailers were found among the scorched remains.

So, as a start, here's a beginner's guide to shopping ethically and supporting workers' rights through the global supply chain:

Organizations like the International Labor Rights Forum (ILRF) offer shopping guides to companies that use sweatshop-free labor, ensure a living wage for their workers, and otherwise act in accordance with international labor standards. These retailers are small and utterly niche. They have names like "Solidarity Clothing" and "Maggie's Organics" and, more often than not, mostly sell T-shirts and tote bags, headbands and yoga pants -- products that the average consumer does not usually require in bulk.

But, as ILRF organizing director Liana Foxvog notes, the average consumer is usually part of a group that does buy in bulk. "Think about the larger organizations that we are already a part of that are also consumers. Ask yourself: Does my child's sports team or school buy T-shirts? Does my company buy tote bags for conferences?" she asks. "Each one of us can think about an organization or group that we are connected to in some way, and we can get these groups to buy from places that are already meeting ethical standards."

So print those "Family Reunion 2013" T-shirts on ethically sourced and produced white T-shirts. Or get the "swag" tote bag for your company retreat from a worker-owned collective. By shopping with small retailers while still applying the collective purchasing power of larger organizations, consumers can feel comfortable about where these products are being manufactured, while ensuring that good businesses stay open and running.

Boycott may seem like an appealing option when faced with failures of corporate accountability, but they aren't always the best kind of consumer recourse, according to Foxvog. As she told Salon, the ILRF does not endorse any boycott that isn't directly called for by garment workers themselves. In fact, the workers ILRF organizes with in places like Bangladesh, Haiti and Central America often urge consumers to buy more -- because they don't want to lose their jobs.

But this isn't an excuse to ignore dehumanizing labor conditions because they are better than no jobs at all, according to Foxvog:

Those arguments create false dichotomies and really dehumanize workers. We need to recognize that workers want jobs, but they want jobs with dignity. And corporations, these multi-billion dollar corporations that are raking in hundreds of millions if not billions of dollars in profits, can absolutely afford to pay a living wage.

While workers may say "buy more," they also say do more. Consumer pressure, in combination with workers' efforts on the ground, can force major corporations to act. That means customers should use their voices as well as their wallets, whether it's chatting with store managers or writing letters to Congress to say that there should be higher labor standards that American corporations need to comply with in their supply chains.

In practice, that can mean shopping at the Gap, but not without a few heavy caveats. Tell retailers that you want them to enforce ethical production standards in exchange for customer loyalty.

And if there was ever a moment to make your voice heard, it's now. Public pressure (and the shame of having your brand associated with the massive loss of life) has already compelled retailers like H&M, Adidas, Levi's and Nike to publish the names and addresses of the manufacturers they work with. That transparency, Foxvog says, is a critical first step: "Transparency is an absolute starting point. Transparency is objective, you can evaluate it. It's clear."

And transparency sets companies apart from others that don't share that information, helping consumers make informed decisions about where to shop and how to act with their dollar.

In 2001, then-MIT Media Lab graduate student Jonah Peretti was completing his master's degree and wound up launching a major grass-roots consumer movement against Nike's use of sweatshop labor. When Nike introduced a campaign allowing people to customize their sneakers with a message of their choice, Peretti requested a pair that read "sweatshop" as a nod to the company's notorious labor abuses. Nike declined to make the shoe, but Peretti's correspondence with the company went viral, igniting a global campaign to hold Nike accountable for the production of its goods, and beginning a change in its corporate and manufacturing culture.

Advocates envision a similar guerrilla campaign targeting retailers still on the fence about signing on to international labor agreements or contracting with factories that maintain building fire and safety codes. There's a calculation from the Worker Rights Consortium that it would cost companies an additional 10 cents per garment to ensure factory safety standards. So what if, in addition to a letter to a store manager, consumers started putting a dime down and telling cashiers where they want their 10 cents to go?

It may seem trite, but when thousands of people do it, it drives a message home. "That says 'I'm willing to act," says Foxvog. "I'm willing to pay a dime more to ensure worker safety in Bangladesh.'"