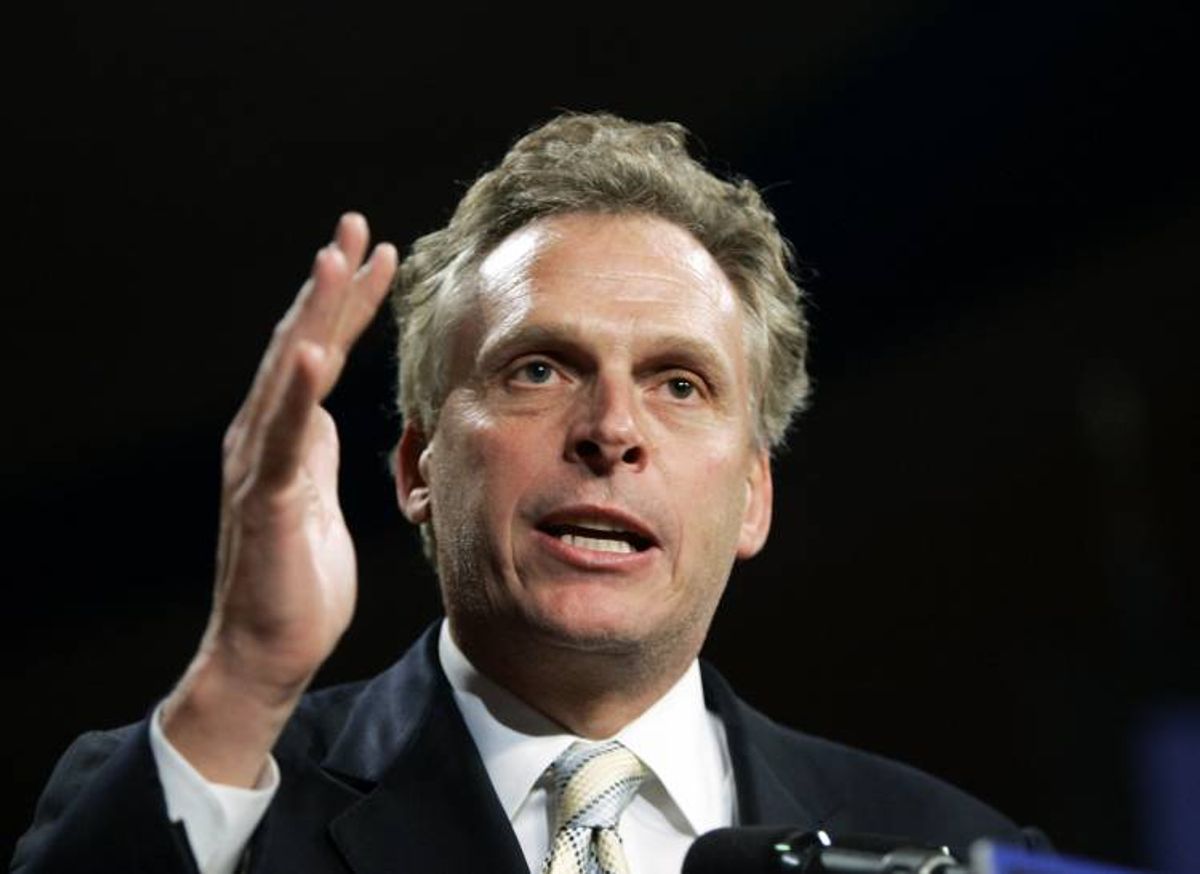 Virginia gubernatorial candidate Terry McAuliffe is a soulless political animal with no redeeming human characteristics, it has been revealed this week. In a series of personal anecdotes that he believes to be amusingly self-effacing, because he has no clue how normal humans would interpret his behavior, McAuliffe has presented himself as a thoroughly personally detestable creature of power with no ideals beyond victory for his "side." He also will still probably be the next governor of Virginia.

McAuliffe is a longtime professional fundraiser for the Democratic Party. The dehumanizing stuff was uncovered by (or provided to) BuzzFeed's Andrew Kaczynski who simply posted some clips from the audiotapes of McAuliffe's autobiography. In these clips McAuliffe abandons his wife as she is giving birth to their daughter to go to a party for former Washington Post gossip columnist Lloyd Grove, and then he forces his wife and his literally newborn son to sit in a car, on the way home from the hospital, while he attends a fundraiser. In the second story it is noted that his wife is crying, but the important detail is that he raises a million dollars for the party.

We got to the dinner and by then Dorothy was in tears, and I left her with Justin and went inside. Little Peter was sleeping peacefully and Dorothy just sat there and poor Justin didn't say a word. He was mortified. I was inside maybe fifteen minutes, said a few nice things about Marty, and hurried back out to the car. I felt bad for Dorothy, but it was a million bucks for the Democratic Party and by the time we got home and the kids had their new little brother in their arms, Dorothy was all smiles and we were one big happy family again. Nobody ever said life with me was easy.

No, no one would say that, because McAuliffe is clearly a sociopath.

So, now we know that Terry McAulliffe is the worst of modern party politics, a money-raising machine with no core. Everyone probably could've guessed that by looking at his résumé, which is made up entirely of positions in which he handled money, and getting money, for politicians and the Democratic Party. There is a lot of opposition research on McAuliffe dropping this week and it all confirms what a cursory look could've told anyone: He's the worst of the Democratic Party. Even though he was sorta joking, it is quite telling that McAuliffe would refer to Bill Clinton as "the greatest president this country has ever had," in a quote presumably provided to Commentary Washington Examiner writer Charlie Spiering.* Clinton was, at best, a caretaker president with few major accomplishments beyond the deregulation of the financial industry that led to our current morass. But Clinton was and is quite good at politics, and he was one of the Democrats who "saved" the party by solidifying its ties to the financial industry. Democrats like Bill Clinton are the reason people like Robert Rubin are Democrats.

McAuliffe is also pretty lucky that the odd politics of Virginia have led him to run against a crazy person, Republican candidate and nullification enthusiast Ken Cuccinelli. Though it's not entirely luck, I guess. A less schizoid state would not have picked two such perfect examples of the worst that each party has to offer. Thankfully for the Democrats, Republicans are allowing nuts and kooks to consume the party, primary by primary.

The Obama-era GOP freak-out has been a boon to "generic Democrat" candidates, though McAuliffe might be a tad too specific to benefit. No one filed to challenge McAuliffe for the nomination. Virginia Democrats brought this on themselves. When McAuliffe ran in 2009, he spent a lot of money and lost the primary, even somehow alienating his natural base of well-off northern Virginia Democrats. His electoral politics dream is frankly bizarre, though I guess every soulless political operator imagines that they could do the job better than the people they work for.

Still, win or lose, both Democrats and Republicans can join together in feeling quite bad for Terry McAuliffe's wife and family.

*While I join Charlie Spiering in mocking McAuliffe's hyperbole I do also want to make fun of his lede:

If you had to choose the greatest president in the history of the United States, who would it be? Washington? Lincoln? Reagan?

Hi, if you choose Reagan you are wrong.