When gun control is a felony 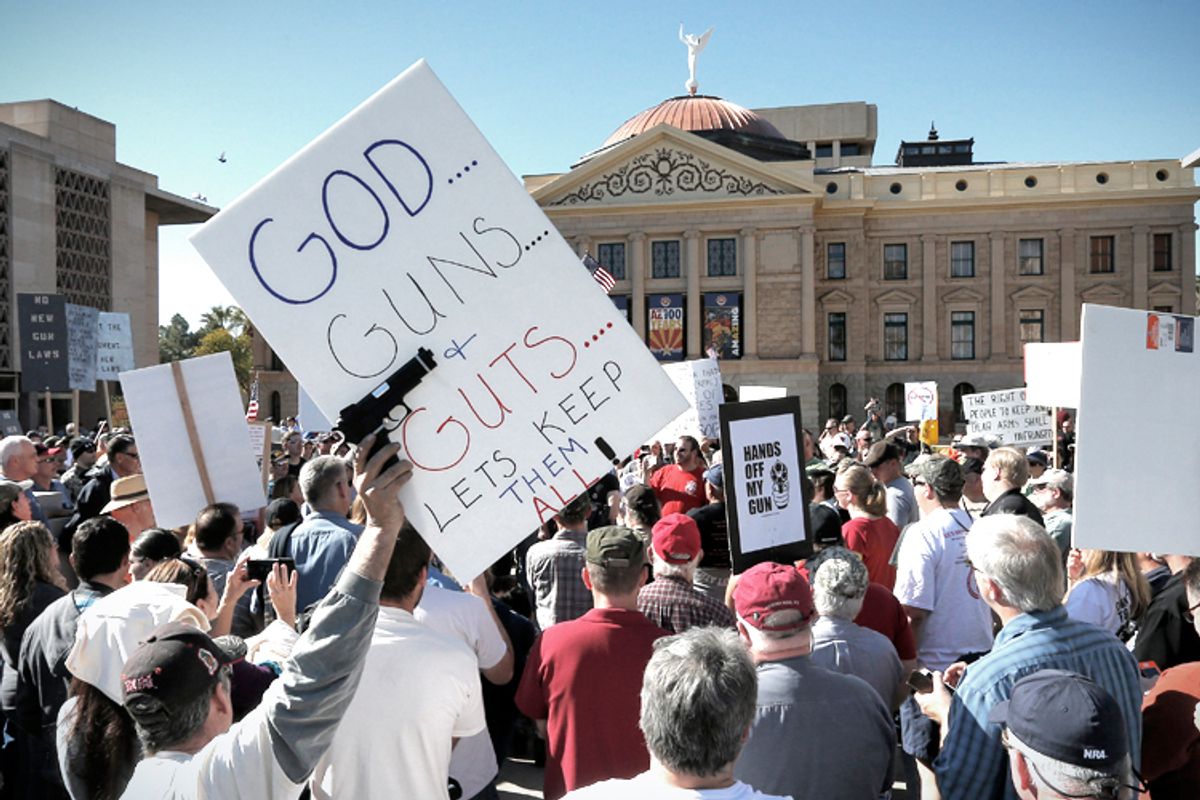 Gun rights supporters stand outside the Capitol Sat, Jan. 19, 2013 in Phoenix during a Guns Across America rally. (AP/Matt York)
--

In mid-April, Kansas passed a law asserting that federal gun regulations do not apply to guns made and owned in Kansas. Under the law, Kansans could manufacture and sell semi-automatic weapons in-state without a federal license or any federal oversight.

Kansas’ “Second Amendment Protection Act” backs up its states’ rights claims with a penalty aimed at federal agents: When dealing with “Made in Kansas” guns, any attempt to enforce federal law is now a felony. Bills similar to Kansas’ law have been introduced in at least 37 other states. An even broader bill is on the desk of Alaska Gov. Sean Parnell. That bill would exempt any gun owned by an Alaskan from federal regulation. In Missouri, a bill declaring federal gun laws “null and void” passed by an overwhelming majority in the state house, and is headed for debate in the senate.

Mobilizing the pre-Civil-War doctrine of “nullification,” these bills assert that Congress has overstepped its ability to regulate guns — and that states, not the Supreme Court, have the ultimate authority to decide whether a law is constitutional or not.

The head of the Kansas’s State Rifle Association, an affiliate of the National Rifle Association, says she put the bill together and found it a sponsor. While the NRA regularly lauds passages of states’ gun-rights laws, it stayed silent on Kansas’ law, and, so far, has kept a low profile on nullification. (The group did not respond to our requests for comment.)

Many observers see nullification bills as pure political theater, “the ultimate triumph of symbolism over substance,” as UCLA law Professor Adam Winkler put it.  He said he doubts the laws will ever be enforced, and, if they are, expects them to be struck down by the courts.

Winkler and others say nullification laws violate the Constitution, which makes federal law “the supreme law of the land … anything in the Constitution or laws of any State to the contrary notwithstanding.” Indeed, U.S. Attorney General Eric Holder wrote a letter last week to Kansas Gov. Sam Brownback, asserting that Kansas’ law is “unconstitutional.” (Brownback, who signed the bill into law, did not immediately respond to our requests for comment.)

But the growing number of such bills -- which have passed by large majorities in at least one chamber of seven state legislatures -- highlight the challenge gun control advocates face in their attempt to fight for gun regulation at the state level.

It also shows how nullification is fast becoming a mainstream option for state politicians. In Pennsylvania, 76 state legislators signed on to sponsor a measure that would invalidate any new federal ban of certain weapons or ammunition. The bill would impose a minimum penalty of one year in prison for federal agents who attempt to enforce any new law.

Supporters of nullification are not simply frustrated at what they see as congressional and presidential overreach. During a hearing about one of the nullification bills she had introduced, Tennessee State Sen. Mae Beavers called the Supreme Court a “dictatorship.”

“You think that the Supreme Court is the ultimate arbiter of any of these laws. I don’t believe that. I don’t believe it was ever granted the authority under the Constitution,” Beavers was quoted as saying in The Tennessean. (Reached by phone, she asked to comment later, then did not respond to further requests.)

The Supreme Court rejected nullification in 1958, after Southern states tried to use the concept to avoid desegregating public schools. “No state legislator or executive or judicial officer can war against the Constitution without violating his solemn oath to support it,” the Court ruled.

Winkler, the UCLA law professor, said that even though the nullification trend was likely to be ineffectual, “It represents a strong, powerful opposition to our government.”

The concept of nullification has had a resurgence since the beginning of President Obama’s administration. More than a dozen states have introduced bills to nullify Obamacare.

The Tenth Amendment Center, a group that advocates nullification as the solution to a range of policy issues, from marijuana legalization to Obamacare, publishes model gun nullification language. The center has little direct contact with state legislators, Michael Boldin, the center’s founder, said.

The roots of guns law nullification trace back nearly a decade.

In 2004, Montana gun rights activist Gary Marbut drafted a bill stating that any guns manufactured and retained in Montana are not part of interstate commerce, and thus are exempt from federal regulation. The bill failed twice, but it became law in 2009 after Republicans took control of the statehouse. By Marbut’s count, at least eight states soon enacted “clones” of the Montana law. (Those laws don’t go quite as far as the more recent nullification legislation. For instance, most of them don’t make it a crime to enforce federal law.)

The federal Bureau of Alcohol, Tobacco and Firearms responded to the earlier laws with letters to local firearms dealers explaining that federal laws and regulations “continue to apply.”

The day the Montana law went into effect, Marbut filed a lawsuit in federal court asserting the right to manufacture weapons in the state without a federal license. The suit, now before the Ninth Circuit Court of Appeals, has been backed by a large group of supporters, including Gun Owners of America, the Second Amendment Foundation, the Cato Institute, the Goldwater Institute, and a group of nine attorneys general, some of them from states that had passed their own versions of the Montana law.

Representatives of Goldwater and the Cato Institute said they see the case as not primarily about guns. Instead, they say, it’s meant to persuade the Supreme Court to rollback the Congress’ power to regulate commerce within a state.

“The likelihood of victory is low,” said Trevor Burrus, a research fellow at the Cato Institute’s Center for Constitutional Studies.

The latest set of bills — including Kansas’ new law — represent a far broader and more aggressive challenge to federal law. Even conservative organizations have been skeptical of the trend.

“A state law that criminalizes federal activity — I would oppose that as both imprudent and wrong,” Burrus said. The Cato Institute’s chairman wrote an op-ed this spring arguing this kind of nullification is invalid.

States should only pass laws challenging federal power "when there is a reasonable legal argument for sustaining them," he said. And the penalty for enforcing federal law in "hard cases" should be "a misdemeanor at most."

The Montana activist whose helped inspired the nullification movement Kansas is also a bit skeptical. While he simply chose to challenge the federal government’s commerce power, Kansas is “bucking federal power more generally,” he said.

“I think, maybe tactically, they may have gone a little further than they needed to,” Marbut said.

Though he supports the principles behind the Kansas law, “I don’t know how much of that they can uphold when it gets to the courts.”

But Marbut hopes that the rapid spread of gun law nullification bills across the country will encourage the Supreme Court to hear his case.

“I see the tide moving our way,” Marbut said. “I think the Supreme Court has figured out that the people of America are gathering their torches and pitchforks and it’s time to settle things down by reeling in the federal giant.”

A spokeswoman for Alaska Gov. Parnell, who has not either approved or vetoed the state’s nullification bill, said last month that “he is supportive of it.” But, she added, “The bill (as with all bills that pass) is currently undergoing a thorough review by the Department of Law.”

In Kansas, Patricia Stoneking, the president of Kansas State Rifle Association, said she was recommending that Kansans not start manufacturing guns under the new law until its legal status has been clarified.

Even if Kansas’ law ends up being struck down in court, “We actually are not going to roll over and play dead and say, ‘Oh, no, shame on us,’” Stoneking said. “The fight will not be over.”