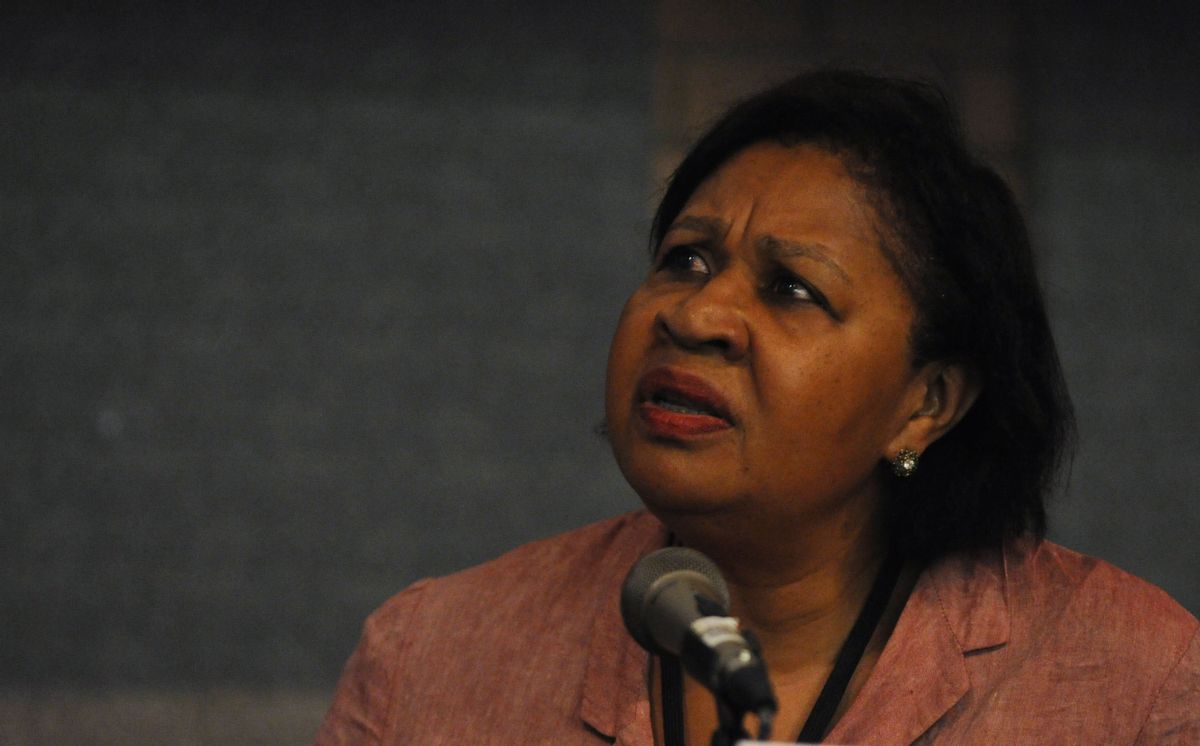 At the opening night reading for PEN’s World Voices Festival of International Literature, Jamaica Kincaid chose to read not from her newest novel, See Now Then, but from John Milton’s Paradise Lost. The Reader caught up with the renowned Caribbean novelist after the reading to discuss mythology, race, and playing pretend.

American Reader: Could you speak a little more about your decision to read Paradise Lost tonight in place of your own writing?

Jamaica Kincaid: Oh, at a certain point my own writing is not so interesting to me. I’ve read it; I wrote it; and I wanted to do something that was unusual. It’s literature. And Paradise Lost is a complicated poem. I found in it—as a 7-year-old it formed very much my feelings about tyranny and about injustice—simplified, because the poem is very complicated.

I just wanted to read something that would not be what was expected. I tend to do that in my writing.  I was almost sure people wanted me to read from my writing, but I never give people what they want.

AR: You said in an interview recently that you feel that the conventional plot, that traditional writing, is actually what is artificial because thinking doesn’t work that way. I was wondering, what do you feel like would be lost in your writing if you adhered to that conventional plot of “and then…and then…”?

JK: For me, simply—it would bore me to tears.

I enjoyed the woman from Cambodia [novelist Vaddey Ratner] very much. And I thought, “Isn’t that wonderful? Why don’t I write like that? That’s something everybody will read.”

AR: In Mother Jones recently you spoke about this period of extreme self-styling, when you had blonde hair and painted eyebrows. Then, in another interview, you said you pretended to be Charlotte Brontë. What has always drawn you to pretending, and what is the connection, for you, between pretending and the search for truth?

JK: I think the times when I was wearing disguises—for example, as a child pretending I was a writer—there was a truth to it in that I wanted to be a writer, but I didn’t know it was possible. It was an aspiration.

When I was wearing outlandish things, they were presentations. They were an attempt, actually, to mask a truth. And then when I no longer felt it necessary, I abandoned it and was myself. But they are sorts of attempts to be in a truth. For one, the truth seemed unavailable—to be a writer—and the other was to hide the fact that I wanted to be a serious person.

AR: In the past, much has been made out of anger in your writing. But also, in person, in readings and interviews, you’re very funny, and I was wondering what do you think the link is between anger and humor, and how do they both serve you?

JK: People only say I’m angry because I’m black and I’m a woman.  But all sorts of people write with strong feeling, the way I do. But if they’re white, they won’t say it. I used to just pretend I didn’t notice it, and now I just think I don’t care.

There are all sorts of reasons not to like my writing. But that’s not one of them. Saying something is angry is not a criticism. It’s not valid. It’s not a valid observation in terms of criticism. You can list it as something that’s true. But it’s not critical.

You may not like it because it makes you uneasy—and you can say that. But to damn it because it’s angry…. They always say that about black people: “those angry black people.” And why? You’re afraid that there might be some truth to their anger. It might be justified.

I promise you, if I had blonde hair and blue eyes this wouldn’t be an issue. No one ever says, “That angry Judith Krantz…” or whatever.

AR: You’ve actually said something similar about your new book. There’s all this discussion about it being autobiographical, and I’ve heard you say, it’s because you are black and a woman.

JK: Yes. I am somehow not supposed to use my life in any way. Let’s say it’s true. What’s wrong with that?

People draw on their life all the time.

JK: I couldn’t—I can’t for the life of me understand why people would go looking to see if there were parallels. There are always parallels. Charlotte Brontë was a nanny, was a governess. What’s the big deal?

It’s not a valid criticism.

I think—especially with this last book, I thought, “Is there something about me that just makes people annoyed?” I’ve always thought people were sort of annoyed at me. My life does seem improbable. Here I am, this young black woman, just from nowhere and I’m writing for the New Yorker. Then I’m doing this, and I’m doing that—yes, it’s annoying.

I have no credentials. I have no money. I literally come from a poor place. I was a servant. I dropped out of college. The next thing you know I’m writing for the New Yorker, I have this sort of life, and it must seem annoying to people.

I remember my friend, George—people used to say to me, other women, when I was young and at the New Yorker: “How did you get your job?” And I would say, “Well, I met George Trow, and he introduced me to the editor.”

And I said to George, “I don’t know why they ask me this.” And he said, “Oh, just tell them your father owned the magazine.”

And so the next time people said, “How did you get your job?” I said, “Oh, my father owned the magazine.” And it stopped.

And I don’t seem to care what people think. I write—from the time I started writing I’ve been writing the same way. And people have been saying the same shit about it: “She’s angry. The sentences are too long.”

My first short story is one sentence, 300 words long.  My writing has always been criticized for this, this, this. I think that people just think, “Why the hell won’t she stop it? We’ve told her we don’t like it. She keeps doing it.”

That’s the way I write.  It’s never going to stop. And the more it makes people annoyed the more I will do it.  And it’s actually really good writing. I’m a good writer. They should just say that: “She’s a great writer.”  I am.

No. They should just say it, “This is really a good writer.” And, “A lot of the other shit that you like isn’t good writing.”

AR: Your new book is engaging with the passage of time, and I was just wondering what made you want to write on that topic now?

Let me see—I won’t name names, but of all the men who write those doorstoppers, is anybody interested in such an interesting theme? No. I just—I don’t care what people think. I will write what I write; I will do what I do.

So, yes, that is the subject of the book. It’s the scaffolding on which the other things are placed. It’s a serious attempt to understand something. You can say I failed at it. I think I failed at it. But for me, the failure is only the opportunity to try it again.

AR:  Last thing—in your new book, you have this substitution of mythology for your own biography.  And so, when you started reading “Paradise Lost” tonight, it was striking to me that you would substitute a great myth for your own work.