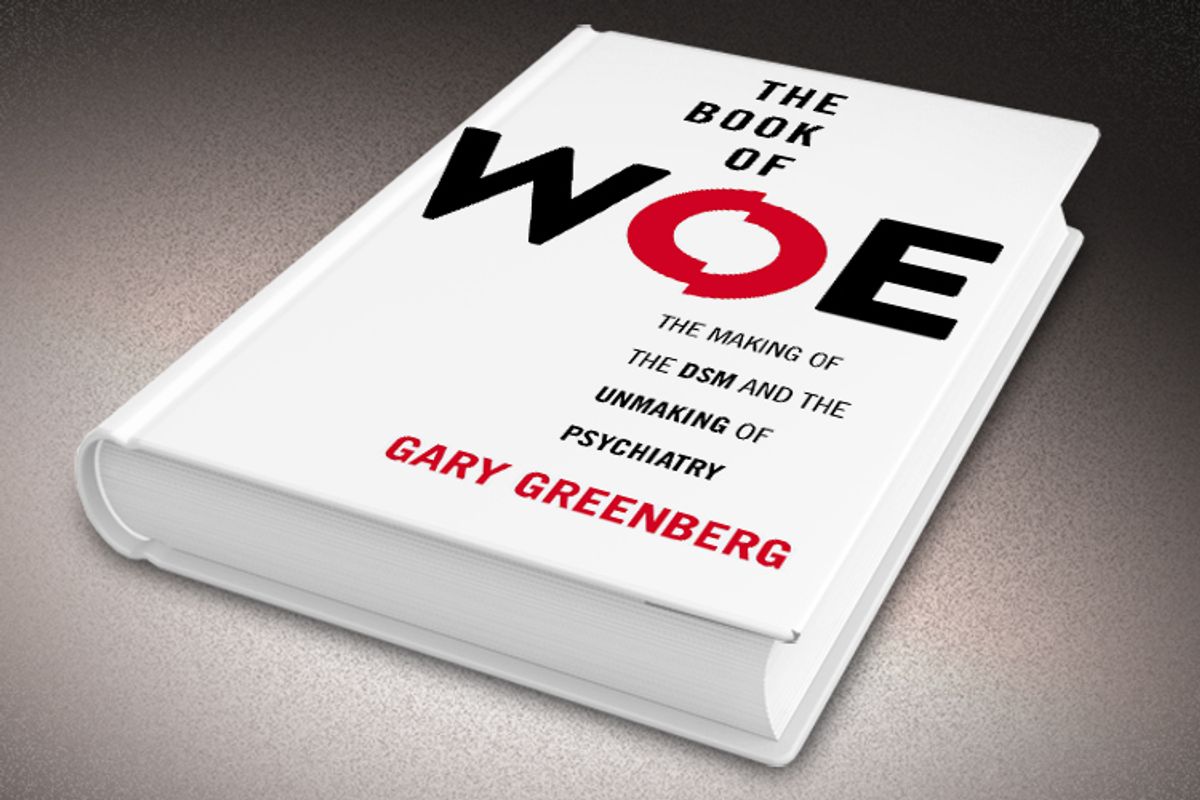 "Psychiatric diagnosis is built on fiction and sold to the public as fact." So writes psychotherapist Gary Greenberg in "The Book of Woe: The Making of the DSM and the Unmaking of Psychiatry." That's an explosive assertion but also one that doesn't quite mean what most of you are probably thinking. Scientologists, settle down: Greenberg is not on your side. And talk-therapy pooh-poohers, spare us all those chortles of vindicated scorn; he doesn't agree with you, either.

"The Book of Woe" is an account of the compiling of the fifth edition of the "Diagnostic and Statistical Manual of Mental Disorders." The DSM was first published in 1952, and in the years since it has been subject to epochal revisions in which the foundations of the mental health professions have been reconceived and revamped. The DSM-5, plans for which were begun as early as 1999, is set to be published this month. The process of assembling it has been anything but smooth, as "The Book of Woe" relates.

Not that controversy is anything new for the DSM, for despite its dull, acronymic title and the eye-glazing professional jargon in which it is written, this manual has always been a battleground. The most famous war fought in its territory pitted old-school shrinks against gay-rights activists over the issue of whether homosexuality ought to be categorized as a mental illness. In a feat of diplomacy brokered by the legendary psychiatrist Robert Spitzer, the "disorder" once dubbed "sexual orientation disturbance" was removed from the DSM-III, published in 1980.

According to the American Psychiatric Association, the DSM's publisher, the bold new DSM-5 will be "based on sound scientific data" derived from a "comprehensive review of scientific advances." This sounds good, and as everyone knows, a wealth of new research in neuroscience as well as revolutionary developments in psychopharmacology have placed our understanding of the biological basis of the human mind on ever-firmer empirical footing -- right?

Wrong. According to Greenberg, despite these much-ballyhooed advances, there is still "not one biological test for a DSM disorder." The terms that many of us bandy about so blithely (for the DSM has always had a significant lay readership) -- major depressive disorder, borderline personality disorder, even schizophrenia -- are not actually diseases with detectable causes or origins. They're collections of symptoms that may or may not respond to any one (or more) of a spectrum of treatments. Not all clinicians can even agree on which diagnosis to bestow on any given individual's symptoms, and certainly there is no test to substantiate their diagnoses, "nothing," as Greenberg puts it, "like the CT scan that confirms that the patient with a persistent cough and fatigue has a tumor in his lung."

Greenberg argues -- persuasively -- that this fifth edition of the DSM arises not out of any new scientific understanding but from one of the periodic crises of psychiatry. In the most notorious recent scandal, Joseph Biederman, a child psychiatrist at Massachusetts General Hospital, decided in the late 1990s that some children he'd been asked to treat for particularly severe attention deficit/hyperactivity disorder were in fact suffering from bipolar disorder. Bipolar disorder, a serious, probably genetic and lifelong condition, had previously been thought to emerge in early adulthood.

BD can be managed with powerful, mood stabilizing drugs, but those drugs have significant side effects. Although there were no substantive studies supporting the existence of pediatric BD, and his child patients did not display one of the key symptoms (manic episodes), Biederman used his considerable prestige to advance his theory. The 2000s saw a boom in pediatric diagnoses of BD and the prescription, to young children, of medication that carried risks of cataracts, diabetes, obesity and a spastic-movement disorder called tardive dyskinesia.

In 2006, a scathing front-page exposé in the New York Times revealed Biederman to be, as one of Greenberg's psychiatrist sources bluntly put it, "a crook." He had received $1.6 million from drug companies in exchange for promoting his diagnosis and solicited even more to fund research that he promised would "support the safety and effectiveness" of their drugs. These and many other revelations of Big Pharma subsidies to the psychiatric profession led to a series of Senate hearings and, eventually, a purge of drug-money funding from the APA. The organization's revenues plummeted, which left it, as Greenberg points out, not only in the midst of a credibility crisis but also in sore need of income. A new edition of that cash cow, the DSM, would solve both.

So the APA heralded a DSM-5 that would represent a "paradigm shift" away from the DSM-IV. The new edition would offer a scientifically based system to quantify the degree of a patient's disorder or suffering while providing a more precise and accurate category for her condition. The only problem with this excellent plan is that there was no impetus for it beyond the self-serving needs of the APA and no real body of evidence to support such claims. As another of Greenberg's sources remarks, a paradigm shift cannot be "forced."

Several of the psychiatrists who worked on the DSM-IV were shut out of the project, and the most prominent among them, Allen Frances, became a relentless critic of the new edition. Much of "The Book of Woe" consists of clashes and duels between the various interested parties, with Greenberg's own skepticism of the "claim that psychological suffering is best understood as a medical illness" as a persistent drumbeat. The specialist and bureaucratic intricacies of these debates can be hard to follow, but their impact is very real; Frances' greatest anxiety about the DSM-5, as he protested over and over again, was that it would lead to overdiagnosis and overmedication. Rumors leaked from the secretive APA suggested that the new DSM would label such ordinary experiences as bereavement or childhood temper tantrums as disorders requiring the administration of potentially dangerous drugs.

Greenberg characterizes himself as a working "talk therapist," but he also seems to aspire to the philosophical psychology of William James. "The line between health and illness," he writes, "can't be drawn without deciding how a human life is supposed to go, how it ought to feel and what it is for -- questions for which science, no matter how robust, is no match." That's aptly put, but Greenberg's sentences can also sometimes lapse into Jamesian abstraction and generality as they unfold over multiple clauses and must be worked out like equations. Since so much of what he's writing about involves specialist jargon or outright obfuscation, there are times when more simplicity and clarity in making his own points -- or explaining the meanings of others' -- would have been welcome.

Nevertheless, seeing how this particular sausage got made is invaluable enough to merit the extra effort demanded. Much of the public regards the DSM as a body of proven medical knowledge, rather than, as Greenberg puts it, a collection of "useful constructs that capture the ways people suffer." Those constructs, however provisional (and, among themselves, most psychiatrists acknowledge the DSM to be just that), can help a patient to a sense of certainty, provide a community of fellow sufferers (as was the case with the diagnosis of Asperger's syndrome, deleted from the DSM-5), inspire confidence in the therapist and -- last but far from least -- justify insurance coverage for any treatment. But the disorders that trip so authoritatively off of everyone's tongues are not diseases in the same way that cancer or strep throat are, and until and unless we learn a whole lot more about the human brain and its workings, they never will be.