Like so many apocalypse tales, the AMC series offers a grim counterpoint to every argument against state power 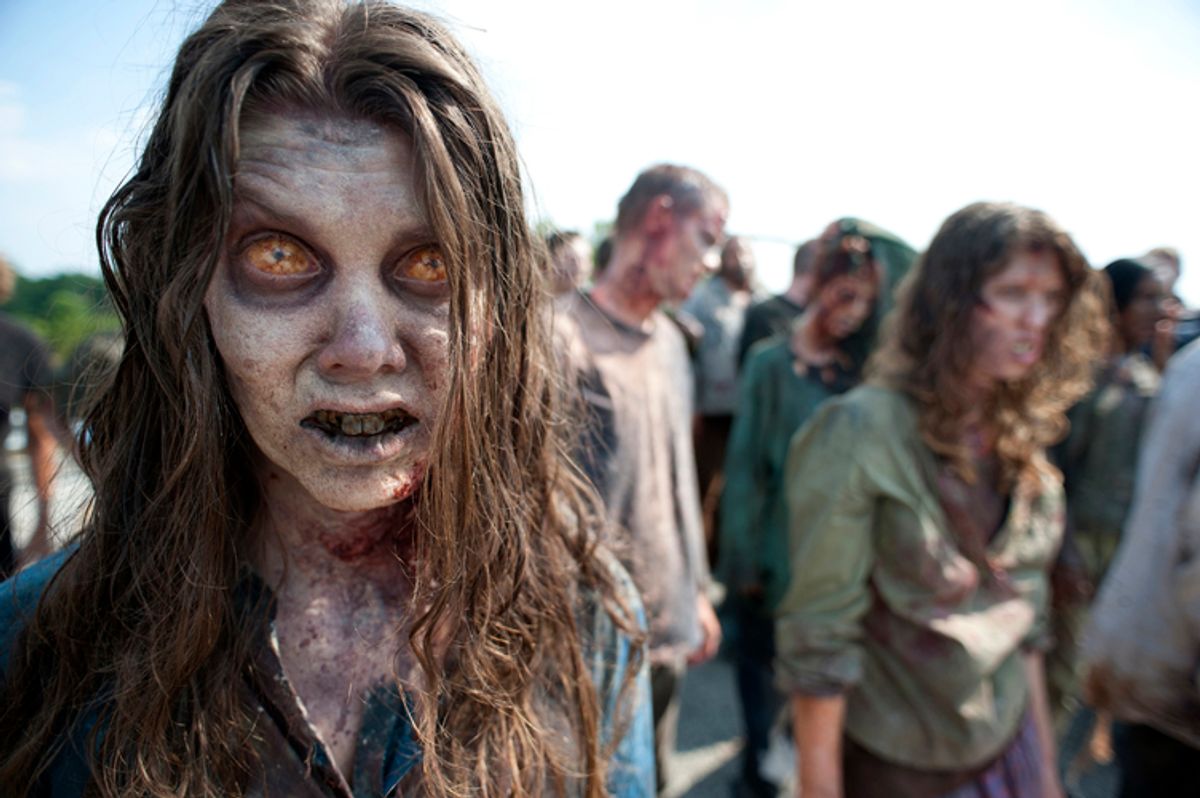 I watched the first two seasons of “The Walking Dead” over the last couple of weeks, and am as thoroughly spoiled on the events of the third season as one can be without actually watching them. And some of the familiar beats struck me, the worn narrative ruts that other stories have carved, but we rarely pay much attention to.

There comes a moment in nearly all post-apocalyptic stories when the characters are compelled to take to the road. In reality, if there is such a thing, people would do the exact opposite. They stay in familiar halls, linger on the same few streets that are most comfortable. The staples of the genre’s thought experiment would hold true in the real world: the breakdown of order, the need to rummage further and further from home. But that need to expand would likely take place in a widening gyre, not an escape onto a road to the horizon. I Am Legend is perhaps the exception that proves the rule, in which the protagonist stays in his home for the entire tale, fortifying his little suburban ranch house against the end of the world.

The cities inevitably become hollowed out death traps in post-apocalyptic fiction, whether of the zombie variety or simple viral outbreak stories. The stories elevate the danger of the cities in a variety of ways, in order to ensure that the unmatchable density of potential looting is never worth the staying in them. Better to take to the road, better to search for the better place. Just about every post-apocalyptic story is a road trip.

I think the heart of the genre calls to the hunter-gatherer in us, the notion that our card houses could be tumbled back down by nature in relative moments. And when civilization disappears, when the shared fiction that props up the last six thousand years dissipates, then we go back to the beginning. It’s a return to hunter-gatherer society, no production, no agriculture, just wandering and gathering, and the incessant warfare with nature and other tribes. The blood-dimmed tide and all that. And so the cities must be abandoned for the truth in the metaphor. We must become wanderers, which is even more fitting in modern America, with our particular worship of the highways and empty spaces.

We loot and pillage the world that’s moved on, but it has a familiar feel to it doesn’t it? It has a nostalgia that we can’t quite place in our own experience. Ten thousand years ago we rummaged through the litter of nature, today it would be the detritus of our own society’s corpse. But it’s the same impulse, the same life. It is a world of no creation, in which we cannot build a car anymore than we could build a horse. In which all knowledge is the realm of magic, and a man owns nothing but what he carries.

The inclusion of a character like Daryl is critical to a tale like “The Walking Dead,” the sort of man who can live off the natural world. He has to be uneducated, has to be the lowest of the old world’s low. Not because he is raised up in this violent new world, but because everyone else is brought down. Glenn’s skill at gathering is not functionally different than Daryl’s skill set. They just specialize in different bushes to pluck.

I do find it curious that the show lacks the equivalent of the character of Glen from The Stand, the deep thinking sociologist who analyzes the new world as much he tries to survive in it. “The Walking Dead” almost can’t afford to have that sort of character because someone who sees that well would break the fourth wall too clearly, would wreck what the show is trying to demonstrate. There’s an old maxim of political science that the great democratic revolutions of the 19th century could only happen in that way one time, because everyone afterward has that hindsight and that road map. Revolutions, true revolutions, can only happen once, when the players of the game don’t know what the rules are, so they can’t destroy each other rigging the outcome.

The characters of “The Walking Dead” are having the knowledge removed, bit by bit. All the foresight and knowledge of the ancien regime dying one by one as the best of them succumb. The military is appealed to, but their tanks all sit hollow and dead. What soldiers survive are massacred. The CDC is revealed as helpless before being reduced to a crater. Fort Benning gone. In Herschel’s Farm they find the stand-in preacher, the hard man of God. It’s no coincidence that the Governor comes next, a callback to the old authority, and a hope for the future. The prison, that great panopticon treated for once as a refuge.

All of these events are the slow stripping away of the vestiges of the state, deriving step by step the hell that waits at the logical end of the libertarian impulse, a counterpoint to every argument against state power. From a certain perspective, the state is our greatest invention, for all the horrors it has wrought when wielded darkly. It is the sine qua non of everything else we normally consider to be the triumphs of civilization. Writing, electricity, science, art. None of it is more than dust in the wind without the state to jealously guard it, without a hand shielding the guttering flame from the maelstrom.

And of course Rick is a police officer, the symbol of the old order, tossed up in charge for no real reason other than that damned uniform he put on out of habit. He takes in his hands the hard decisions. He is become the state as thoroughly as old Louis.

It is difficult for us to retell the story of the creation of the state, for us to step outside its existence and really look at it. It’s everywhere, and for all of written history, always has been except for glimpses here and there. And we fetishize those glimpses of the forging of the state, of the sheriff drawing iron in the anarchy of the West. But to retell it from the beginning, with characters we can understand, requires a story that starts with civilization and then tears it down and grinds it into dust. A story willing to annihilate any characters who would provide the moral compass of the old world, who can break the fourth wall and tell the characters how this was accomplished before.

The only way we can re-experience the birth of civilization is to first destroy it.