Searching for Sugar Man and finding Osama: A look at the best docs YouTube has to offer 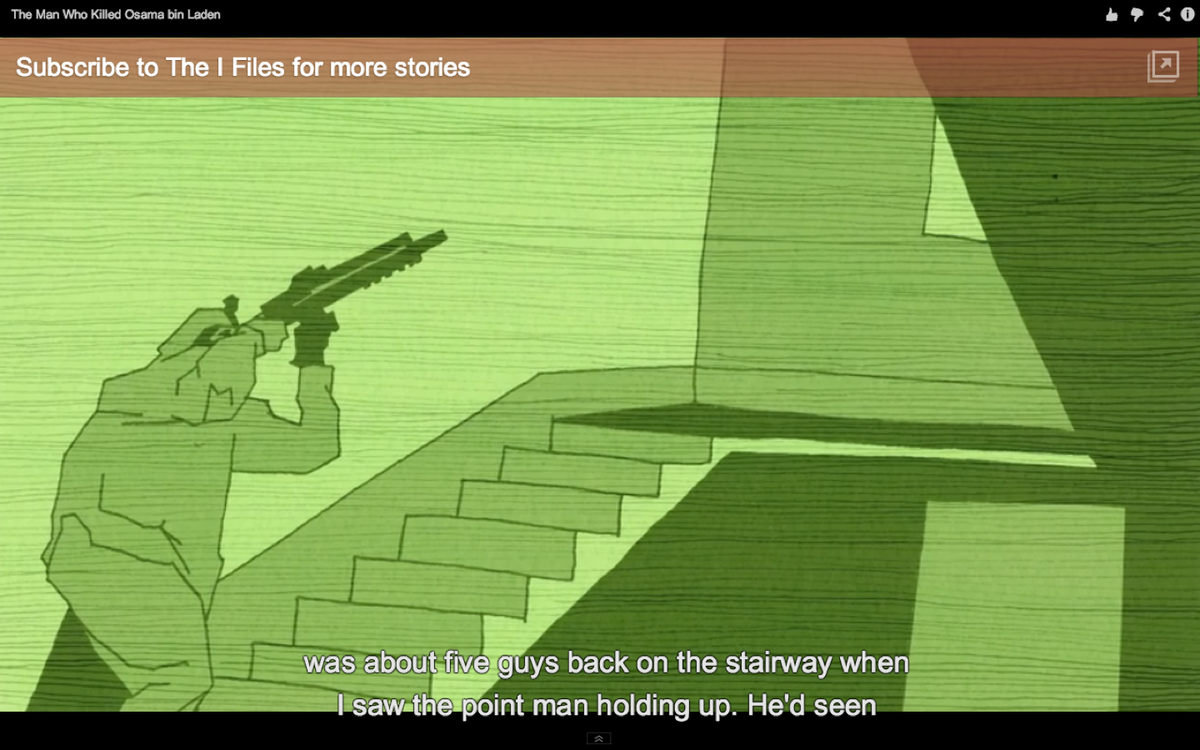 Scene still from "The Man Who Killed Osama bin Laden"
--

Where can you find Navy SEALs, horse racing, forgotten musicians and the shadowy trade in human body parts all in one place? Only on The I Files, in our list of this week’s top investigative videos.

Please take a moment to subscribe to The I Files, a totally free one-stop news source, for a first look at the best documentaries and news videos available online.

The I Files is like a 100-to-1 long-shot filly that comes charging around the final bend into the home stretch and wins the race by a head in a heart-stopping finish. Watching is exciting and the payoff is rewarding.

After watching this video, a bottle of urine and a bacon breakfast sandwich will always be inextricably linked with the death of Osama bin Laden.

This week marked the two-year anniversary of bin Laden’s death in a compound in Abbottabad, Pakistan, at the hands of an elite unit of U.S. Navy SEALs. Despite many articles, books and an Oscar-nominated feature film, many of the details about the raid remain highly contested and shrouded in secrecy.

In this video by the Center for Investigative Reporting, the Navy SEAL who says he shot bin Laden gives a blow-by-blow re-creation of the raid and its aftermath. Based on a series of interviews by CIR Executive Chairman Phil Bronstein for Esquire magazine, the story is told in graphic novel format with a voice actor to protect the identity of the anonymous SEAL, who worries about being targeted by al-Qaida should his identity become known.

The story is told with a dramatic eye for detail and a dark sense of humor. The SEAL recalls that during the long flight to the staging area, he nervously had to relieve himself in a bottle that he ended up carrying throughout his historic mission. After the raid, he remembers the moment when he heard the public announcement of bin Laden’s death.

The story has generated a fair amount of controversy and conflicting claims, but the most surprising element is the difficulty the SEAL says he’s faced returning to civilian life. It’s tough to find a job when everything you’ve done for the past 16 years is classified.

After everything, he still has some big questions about his role in bin Laden’s death.

“Disarray at the Track: Breakdown, Part 2,” The New York Times

This weekend, the crowd at Churchill Downs will break out the frilly hats and mint juleps to watch the Kentucky Derby. But away from the pomp and circumstance, the behind-the-scenes toll on the horses and jockeys is often overlooked.

Twenty-four horses die on a racetrack in the U.S. every week, according to a New York Times analysis. Many of these breakdowns are blamed on illegal drugs given to the horses that endanger both the animals and the jockeys who ride them. This two-part New York Times investigation goes inside the billion-dollar horse racing industry to document the lengths to which some owners will go to ensure a win.

The report focuses on the tragic story of Hall of Fame jockey Jacky Martin. Once one of the most sought-after riders in the business, Martin was paralyzed from the neck down when the horse he was riding collapsed at the finish line. Martin’s story is heartbreaking, but he says that his love of the sport is undiminished and that despite his crippling fall, he still would have pursued his dangerous career.

“I guess if you give me a chance to say you’re not paralyzed and you never rode a racehorse, I’d have to take the paralyzed,” Martin says. “Because there’s not a better feeling than riding. Not to me.”

Friday was World Press Freedom Day, an occasion established by the U.N. to encourage governments to respect the freedom of the press and remember journalists who have been jailed or silenced.

A Swedish reporter describes his experience of being captured by government troops in Ethiopia. He and his cameraman were forced at gunpoint to act in front of government cameras and provide evidence that eventually would be used against them in court. At one point, a government minister tells the journalist that he’s not satisfied with his performance during the day’s filming. The troops arrange a mock execution, threatening that unless he plays his part more convincingly, they will shoot him, leave him in the desert and blame the rebels. The Swedes eventually were pardoned and released, but local Ethiopian journalists still are languishing in prison or in exile.

Ultimately, this story asks whether journalists are collateral damage in the war on terrorism or whether in some places, they are in fact the real target.

“Skin and Bone: The Shadowy Trade in Human Body Parts,” The International Consortium of Investigative Journalists

Every day around the world, millions of body parts are turned into medical products for dental implants, corneal transplants, knee repairs and wrinkle fillers. The business has largely escaped public scrutiny, but an eight-month, 11-country investigation by the International Consortium of Investigative Journalists uncovers rampant abuse.

“Skin and Bone” goes inside the shadowy industry that specializes in the buying and selling of human body parts. This trade in human tissue (including muscle, bones, tendons and skin) is different from the tightly regulated organ industry. While it’s technically illegal to buy or sell human tissue in the U.S. and many other countries, this is still a for-profit business. Companies can charge large fees to cover the supposed costs of retrieving and maintaining the tissue. In fact, everyone makes money except the families of the donors, many of whom don’t know that for-profit companies are making money on their donations.

As one donor’s relative explains, this human tissue is “regulated as a medical device. It’s no longer part of Uncle John; it’s product XYZ123.”

Some donors’ families also have complained that the bodies of their relatives were not treated with proper respect. One mortician’s letter to the company that retrieved the tissue lays this out with disturbing frankness.

“This was by far the worst donor body I have ever seen. To say this was a hack job would be a compliment,” the note states. “We should consider ourselves lucky that you left us his head and hands for viewing, and yes, that is his severed foot in the photo.”

Be warned that this video is not for the faint of heart or stomach – it features some seriously graphic and downright gruesome images. The tissue removal business is, even in the words of those involved, invasive and brutal, and this report pulls no punches. If you are at all squeamish, I recommend turning off the picture and listening to this story as an audio report. It’s still a powerful indictment of a little-known and often overlooked industry.

After you’ve braved the close-up shots of human skin removal in the last video, unwind with a clip from this year’s Oscar-winning documentary, “Searching for Sugar Man.”

The film follows two fans from Cape Town, South Africa, as they try to figure out what became of the American musician Sixto Rodriguez, who was wildly famous in South Africa but largely unknown in the U.S. The documentary is also noteworthy for being the first movie shot partly with an iPhone to win an Oscar.

This excerpt introduces the South African fans who look to Rodriguez’s music for clues on where to find him. It also features a wizened, world-weary record producer, Steve Rowland, straight out of central casting, who should be a prerequisite of all future music documentaries.