Thanks to Kickstarter, Melville's classic may become the next "Magic: The Gathering" 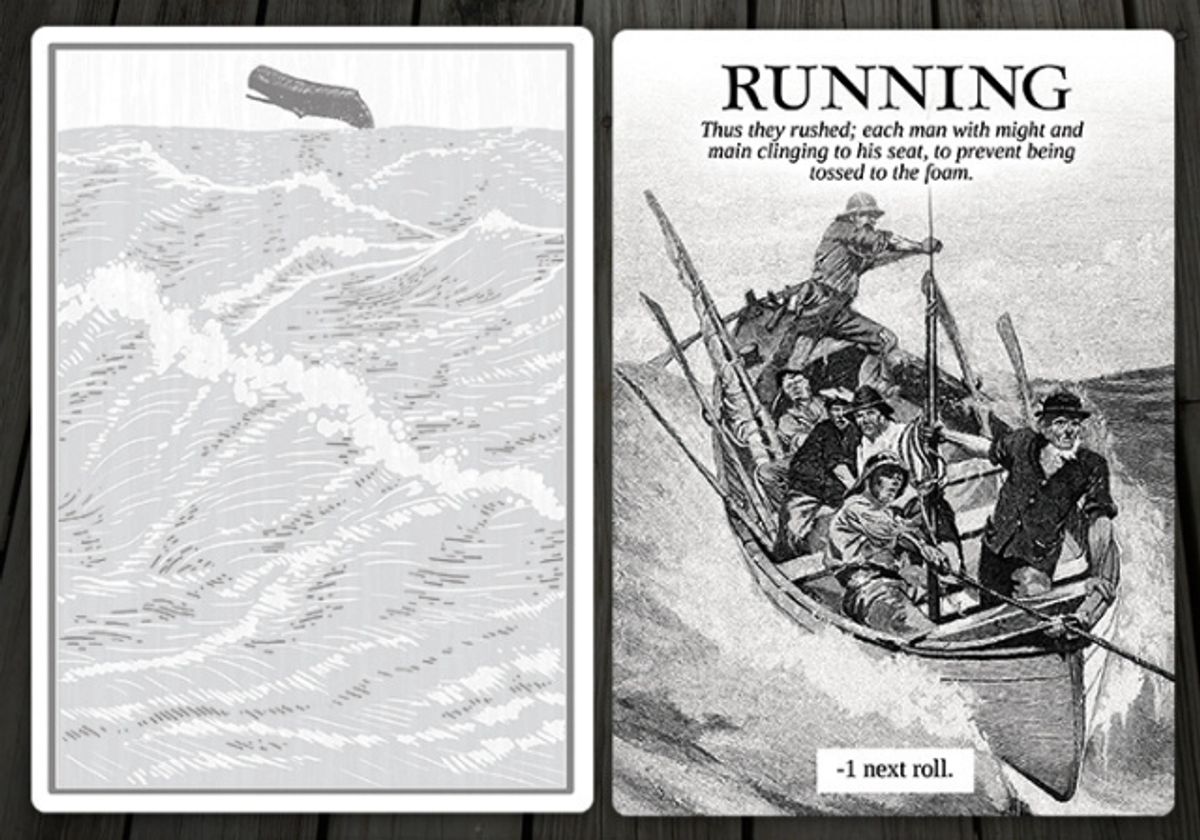 “Wilt thou not chase the white whale! Art not game for Moby Dick?” And as Captain Ahab demanded this of chief mate Starbuck in Herman Melville’s 1851 novel Moby-Dick; or, The Whale, so you are asked to go on your own treacherous whaling adventure in Moby Dick, or, The Card Game.

If you’re already panicking about the lack of proper punctuation in the table top game’s title, don’t worry, a great effort is being made by the game designers and artists to instill the game with the true spirit of Melville’s novel. The title is actually meant as a tribute to the whale itself (unhyphenated in name), and aboard the Pequod of the game, you, too, hunt whales. Currently in the midst of a Kickstarter fundraiser, the project from NYC-based games company King Post will include all of the action in Melville’s sprawling novel (presumably with the condensing of some of his denser writings on whale structure and knot tying techniques). The visuals were majorly influenced by the Barry Moser woodcuts in the Arion Press edition of Moby-Dick from 1979, an edition of which there were only 250 copies (there is also a trade version which this author owns and highly recommends), as well as ephemera of Melville’s own time.

Some iconic characters in “Moby Dick, or, The Card Game” (courtesy King Post)

“We wanted to use found imagery from public and private collections to bring our players directly into the aesthetics of the sailors of the 1800s,” Tavit Geudelekian, president of King Post, explained. “We found daguerreotypes, lithorgraphs, prints, illustrations, and other portraiture and fell in love with a diverse cast of seamen that would make up our Sailor Deck.”

The game is played with three decks, representing “The Sea,” “The Sailor,” and “The Whale,” respectively, and in these contain all that happens to the Pequod crew in Melville’s story, as well as all of the characters as well as some “easter-egg” characters for “the true Melvilleans out there.” Geudelekian described the play of the game as being somewhere between Settlers Of Catan and Magic: The Gathering. Some images in the decks came from the private collection of the New Bedford Whaling Museum, while others are original illustrations by King Post’s illustrator/cartographer Havarah Zawoluk. John Kauderer, the art director for the project, connected all these sources by forcing a bitmap through them so that they take on the looks of woodcarving, adding underpainting sampled from the photos to add color at the end. “Usually to keep things interesting I’d pick a celebrity or friend that looks kind of like the source material to pull samples from,” noted Kauderer. Here are two examples of daguerrotype-to-playing card:

Process of creating the Gabriel card, original image from the Library of Congress

While the game might seem like great fun to imagine roving the seas on this desperate quest for the evasive White Whale, Geudelekian gave this caution: “Make no mistake though, as fun as the game is to play it is absolutely endowed with the same sense of doom as the Pequod‘s doomed voyage.”

It’s likely, and I hope I am not spoiling an over 160-year-old book here, that you may not make it back from your encounter with the White Whale. Yet the last to survive will earn the privilege to anoint themselves Ishmael.

Moby Dick, or, The Card Game is currently being funded on Kickstarter.