Despite our differences, most Americans think CIA funding Karzai is an outrage. Here's an idea we can all support 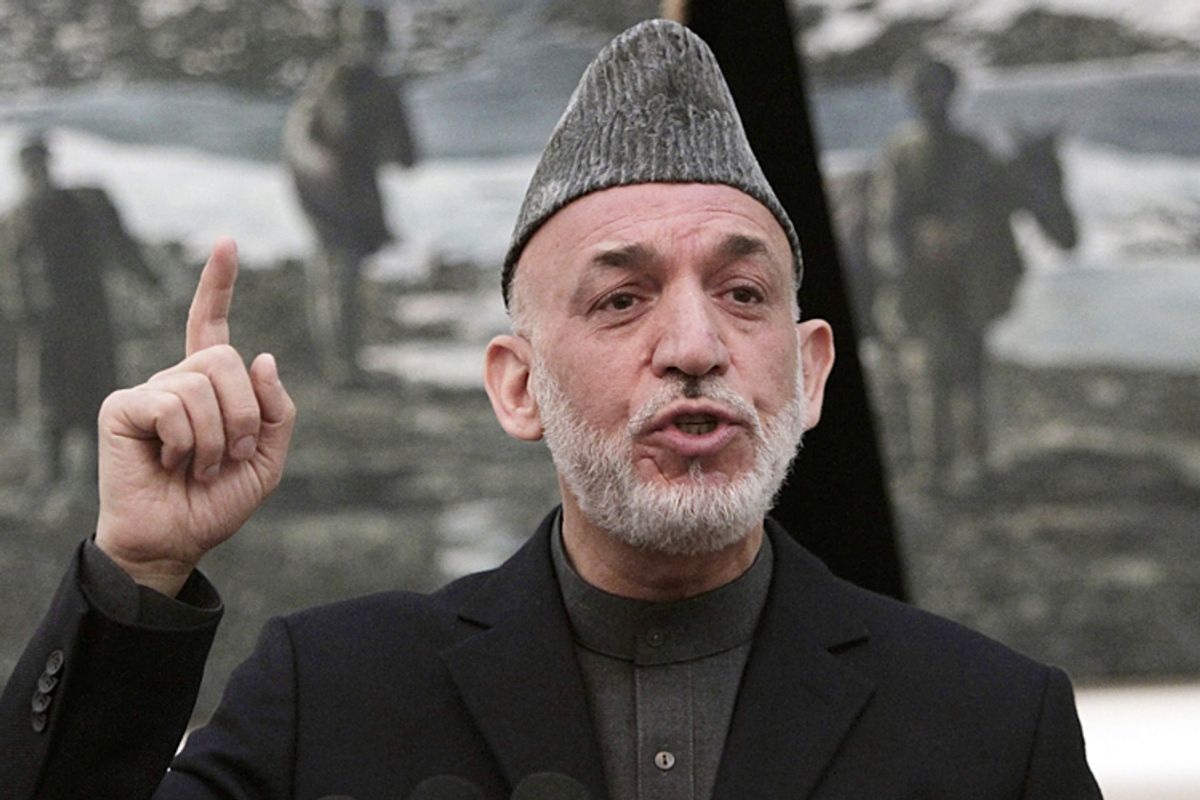 It’s been a good week for outrages. Last Sunday, the New York Times revealed that the CIA has been literally handing over sacks of cash to Afghan President Hamid Karzai since the start of the war there. No one knows the exact amounts involved, but possibly tens of millions of taxpayer dollars have found the pockets of Karzai’s friends and possible rivals -- including an alleged mass murderer or two.

Then this Sunday, the foundation that oversees the still-unopened September 11 National Memorial and Museum at ground zero voted to charge visitors an admission fee of $20 to $25, because it can’t cover the museum’s projected operating cost of $60 million a year with donations alone.

Let’s take all that cash and put it toward the 9/11 memorial’s operating expenses. Let’s make the museum at ground zero free and accessible to all comers.

The media -- myself included -- obsess over the many ways Americans are rancorously divided against each other. But it’s often what we agree on that’s more telling. We largely agree that the U.S. should end its costly, pyrrhic military campaign in Afghanistan, Karzai-cash-bags and all: In March, 56 percent of respondents to an ABC News/Washington Post poll said the war wasn’t worth fighting. (That’s down from a high of 66 percent last year.)

There aren't great stats on this, but I feel pretty confident that most Americans are also uneasy with peeling a Jackson from their wallets to pay respect to the victims of Sept. 11, gain a deeper understanding of that day’s events, or do whatever else they may see fit to do at the national museum. (A walk around the reflecting pools that fill the World Trade Centers’ footprints will still be free, but will require a ticketed reservation -- and an online reservation will incur a $2 fee.)

The Karzai and ground zero stories, of course, are inexorably connected. Nearly 12 years ago, the U.S. initiated war in Afghanistan as a response to the 9/11 attacks. We pushed out the Taliban -- those provincial Pashtun zealots who held Kabul and harbored America’s enemy, Osama bin Laden -- and we ultimately replaced them with Karzai.

Today, the war continues -- another eight U.S. service members died this weekend-- but America no longer seems to derive any added security from it. The Boston attacks demonstrated that not everyone who wishes America harm hails from the Hindu Kush. And while the Taliban may yet come back and topple Karzai’s regime, they can’t bring back Osama bin Laden or his lieutenants.

So let’s do Americans a solid. Let’s stop shoveling our cash at Karzai and refocus on how we as a nation will learn from the event that put us in Afghanistan in the first place.

While we’re at it, though, we should scrutinize the 9/11 museum’s finances as closely as we should scrutinize Karzai’s. It’s going to cost a lot to keep the ground zero shrine going, true, but maybe not as much as some of the foundation’s movers and shakers suggest. Board member Debra Burlingame -- whose brother, Chic, mentored me in my brief military career before he died piloting the American Airlines flight that impacted the Pentagon -- says the main cost driver is site security, and no expense should be spared.

"The World Trade Center site remains a target of interest among terrorists, so the security has to be robust and relentless," Burlingame told NBC, adding that she found it "irresponsible to hope that year after year we have donations that will cover an expense like security." If that sounds like a Cheney-esque attitude -- don’t question the costs of preventing a worst-case scenario, no matter how improbable! -- there’s good reason: Burlingame campaigned vigorously for Bush-Cheney in 2004, and she sits with Liz Cheney and Bill Kristol on the board of a neocon political group called “Keep America Safe.”

Museum or no, the new Freedom Tower and its environs would require robust security anyway, so it strains credulity to believe that the museum’s security cost could be so huge, over and above what’s borne by the rest of the World Trade Center’s residents. And before demanding tribute from museum visitors, perhaps the 9/11 foundation could appeal to the patriotism of its security providers, and ask them to discount their services ... or explain to the kids of P.S. 532 why a full commission on closed-circuit TV monitoring trumps a free educational field trip.

Between the Karzai “ghost money” and the security flab in the 9/11 foundation’s budgeting, there’s probably enough space to lower that admission cost, or do away with it entirely.

The greater concern, though, is not the cost of running ground zero’s memorial, but its ownership status.

To whom will the 9/11 museum belong? It ought to belong to all of us -- not just Americans, and certainly not just those who can afford to pay a hefty entrance fee. So let’s use our national wealth in a wise way for once, to make sure all comers feel that common sense of ownership at ground zero. After all, not everyone has as much cash lying around as a U.S.-supported Asian potentate.