Why is Obama withholding secret torture report from Americans?

A massive report on torture reveals it's far less effective than reported. But the CIA refuses to declassify it 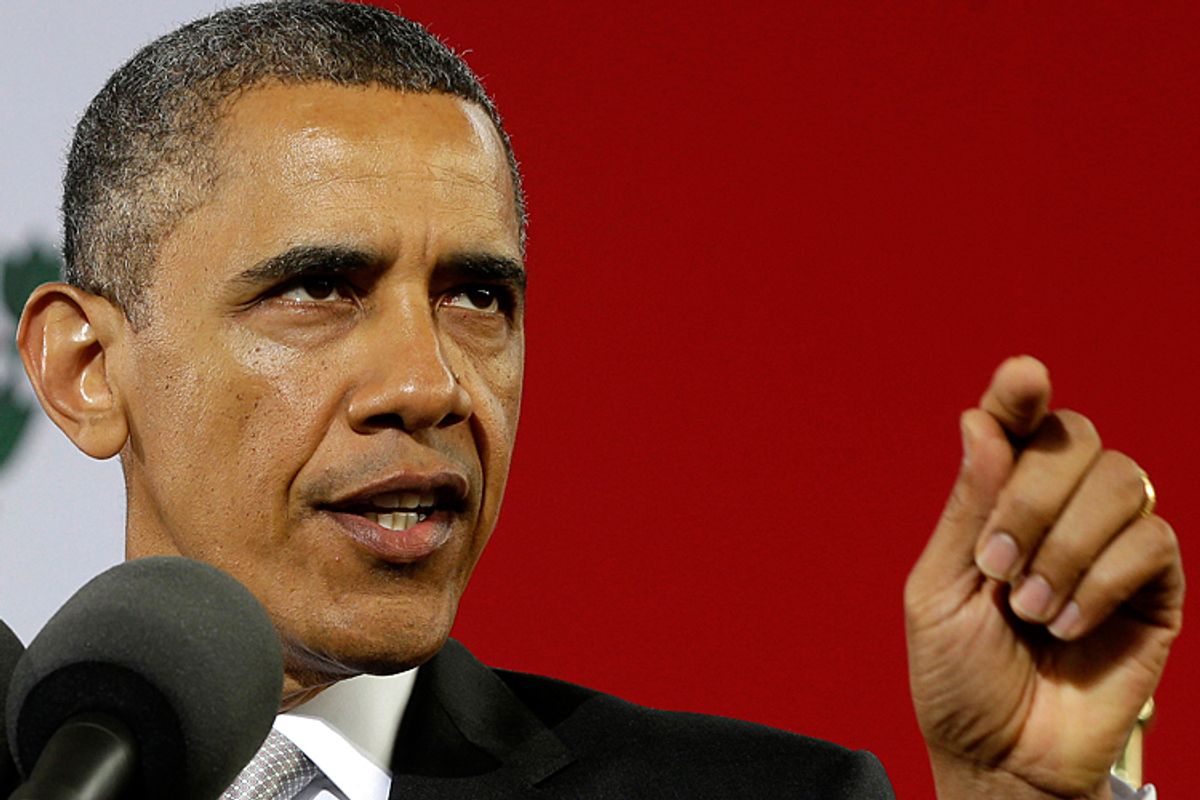 Much of what you’ve been told (or seen in movies) about George W. Bush’s supposedly effective torture program is false and overhyped. At least, that’s one of the conclusions of the 6,000-page review of the program the Senate Intelligence Committee completed last year.

Yet, right now, President Obama is preventing you from learning any of this, by keeping the report classified.

Before the end of the Bush administration, Sen. Jay Rockefeller, D-W.Va. — then the chairman of the Senate Intelligence Committee — started investigating the torture program. When Sen. Dianne Feinstein, D-Calif., took over as chairwoman of the committee in 2009, she intensified the investigation and negotiated with the CIA to get access to its files. After almost four more years of work and reviewing 6 million pages of documents, the committee voted out the report in December on a mostly party line vote.

As you may recall from the debate around the film “Zero Dark Thirty,” Sens. Feinstein, Carl Levin, D-Mich., and John McCain, R-Ariz., have said the report shows that torture didn’t produce the intelligence that led us to finding Osama bin Laden. According to reports, it shows that torture didn’t produce much useful information. While discussing the report, Jay Rockefeller described the torture program this way:

[T]he people who ran it were ignorant of the topic, [it was] executed by personnel without relevant experience, managed incompetently by senior officials who did not pay attention to crucial details, and corrupted by personnel and pecuniary conflicts of interest. It was sold to the policymakers and lawyers of the White House, the Department of Justice, and Congress, with grossly-inflated claims of professionalism and effectiveness, so-called lives saved.

In short, the report rebuts claims that torture worked — and specifically the claim made by torture boosters from Dick Cheney to former Counterterrorism Center head Jose Rodriguez that it helped to find Osama bin Laden.

Accounts of the reports’ findings are not limited to whether torture worked. According to Sen. Ron Wyden, D-Ore., it shows “the CIA repeatedly provided inaccurate information about its interrogation program to the White House, the Justice Department, and Congress.”

The finding that the CIA lied about its covert activities to everyone tasked with overseeing them ought to raise concerns going forward, whether or not the CIA ever conducts an interrogation again, because it suggests our intelligence oversight system is broken. Yet the report remains classified and torture boosters keep making expansive claims that, Senate Democrats insist, the report rebuts. While Sen. Feinstein has always made clear that the CIA is not the only agency that will decide whether to release the report, that’s where the focus has been.

Originally, the CIA was due to respond to the report on Feb. 15. John Brennan’s nomination to head the CIA in February — and his failure to review the report before the confirmation process — provided an excuse to delay that date.

The delay to allow Brennan to read the report has been extended indefinitely. When Rep. Jan Schakowsky, D-Ill., asked Brennan when the report would be released on April 11, Brennan did not answer; instead, he assured Schakowsky he would thoroughly report to Sens. Feinstein and Saxby Chambliss, R-Ga., “things that I might think that the — the committee may have — the committee’s report might not accurately represent.” Recently, Senator Mark Udall, D-Colo., claimed, “Director Brennan and his staff have shown little to no interest in engaging collaboratively and constructively with the Committee on a path forward on the Committee’s Study.”

Rather than when the report would be reviewed, then, Brennan’s stalling has shifted the discussion to what the CIA — the same agency accused of misrepresenting torture to Congress and others — will demand gets changed, and now a lack of engagement on the report generally. And the focus on whether Brennan would agree to the torture report’s release just distracts from the person who really gets to decide whether to release the report or not: the president.

As Vice President Joe Biden hinted last weekend — when agreeing with John McCain the report should be released — this is an issue being debated in the White House, not just at Langley. “The internal debate that goes on in the Congress and in the White House is, do we go back and do we expose it? Do we lay out who was responsible and how we got to where we are?”

Consider, for example, how the Bush White House unusually intervened to keep the torture program secret. According to a court document submitted by then CIA Director Leon Panetta in 2009, his predecessor at CIA, George Tenet, wasn’t the person who made the torture program a “Special Access Program” with sharply limited access, which is how it would normally work. Unnamed officials in the National Security Council did:

Officials at the National Security Council, (NSC) determined that in light of the extraordinary circumstances affecting the vital interests of the United States and the sensitivity of the activities contemplated in the CIA terrorist detention and interrogation program, it was essential to limit access to the information in the program. NSC officials established a special access program governing access to information relating to the CIA terrorist detention and interrogation program.

The Bush-era Executive Order governing classification and the current one both require presidential authorization for someone besides one of several agency heads — in the case of the torture program, Tenet — to make a special access program. Thus, as the Federation of American Scientists' Steven Aftergood notes, “if the NSC established a special access program, as Panetta said, then it must have been authorized by the President himself. In effect, the President established the special access program.” The former director of the office that oversees classified information, Bill Leonard, agrees. “If it wasn't one of those [Agency heads] who established the SAP in question, there would have to be an authorization from the President authorizing that official to establish a SAP.”

While the CIA appears to be the entity stalling on the torture report, according to Panetta, the White House ultimately created and owns the program.

It’s not just Bush’s NSC that has taken extraordinary measures to keep the torture program secret. While Barack Obama’s administration has already permitted the declassification of a great deal of information on the torture program, in fall 2009 Obama took the almost unprecedented step of having his National Security Advisor — at the time, retired Gen. Jim Jones — submit a declaration in the American Civil Liberties Union’s Freedom of Information lawsuit seeking release of documents pertaining to the torture program. It did so to hide the role of the White House in torture.

The judge in the suit, Alvin Hellerstein, believed that a short phrase describing “the source of CIA’s authority” to conduct torture had been incorrectly redacted by the administration. Jones’ declaration, which remains sealed and unrecorded on the docket, apparently argued that phrase couldn’t be released.

Judge Hellerstein lost that argument (the 2nd Circuit overruled him, relying in part on Jones’ declaration), so we don’t know precisely what the phrase in question said. But other documents in the case make it clear the phrase refers to a Sept. 17, 2001, presidential “directive” that, in part, set up the torture program. Former CIA lawyer John Rizzo, who was a key figure in setting up the torture program, has described the directive. “A few days after the attacks, President Bush signed a top-secret directive to CIA authorizing an unprecedented array of covert actions against Al Qaeda and its leadership” including “the most ambitious, sensitive and potentially explosive new program authorized by the President — the capture, incommunicado detention and aggressive interrogation of senior Al Qaeda operatives.”

But as Rizzo makes clear, that directive not only authorized torture, it authorized a range of counterterrorism programs. The directive also authorized — and may still form part of the authorization for — the targeted killing program, most commonly associated with drones. Indeed, when the 2nd Circuit kept the phrase redacted, it cited other activities: “the withheld information pertains to intelligence activities unrelated to the discontinued program.”

President Obama’s administration may have already released a great deal of information on the torture program (which should mean much of the information in the report has already been declassified). But when it came to revealing the Bush White House’s role in unilaterally authorizing torture, Obama went to unusual lengths to keep the information secret.

And now, in spite of Panetta’s claims that the White House originally made torture a SAP, the White House has done nothing to accelerate the release of a report that — according to Democrats on the committee and John McCain — will correct many misconceptions about the torture program.

Of course, as president, Obama would have the authority to order John Brennan to declassify the report in any case. But the White House seems unwilling to acknowledge whether it possesses the sole authority over this decision. In response to a question whether — as Panetta’s statement indicates — the White House has classification authority over the program, NSC spokesperson Caitlin Hayden didn’t answer.

Instead, she used the same kind of stalling technique as the CIA:

The Administration is currently reviewing the full 6,000 page report at the invitation of the SSCI and we look forward to working with the Committee once that review is complete. As you know, one of the President’s first acts in office was to sign Executive Order 13491, which discontinued the CIA’s detention program and banned all interrogation techniques not authorized by the Army Field Manual.

As with Brennan, the White House is promising only to review the report, not to declassify it after review.

In a letter sent to the president on Wednesday, Sen. Udall recalled that commitment to end torture. “In 2009, you made it clear that the CIA’s detention and interrogation program and its ‘enhanced interrogation techniques’ had no place in an Obama administration. I deeply appreciate your stand on these important issues.”

Udall went on to repeat a point Democratic senators keep making: that the torture report shows CIA lied to a range of entities, up to and including the White House.

I know you believe in the importance of correcting the public record if it is determined that inaccurate information has been conveyed to the American people by the U.S. government. In the case of the CIA’s detention and interrogation program, inaccurate and misleading information was conveyed by the CIA to the public, the Congress, the Department of Justice, the Department of State — and to the White House itself.”

Udall emphasizes the importance of the President’s support for correcting the false record. “Only by acknowledging and correcting the false public record can the CIA — with your support — credibly institute the necessary reforms that are essential for the CIA to be its best.

According to Sen. Udall’s spokesperson, neither his office nor the committee has gotten any response from the White House about the report yet. This isn’t just a Bush administration issue.