Adultery, abandoning his office, mock-hijacking a reporter's car. And yet: Not being a Democrat might trump it all 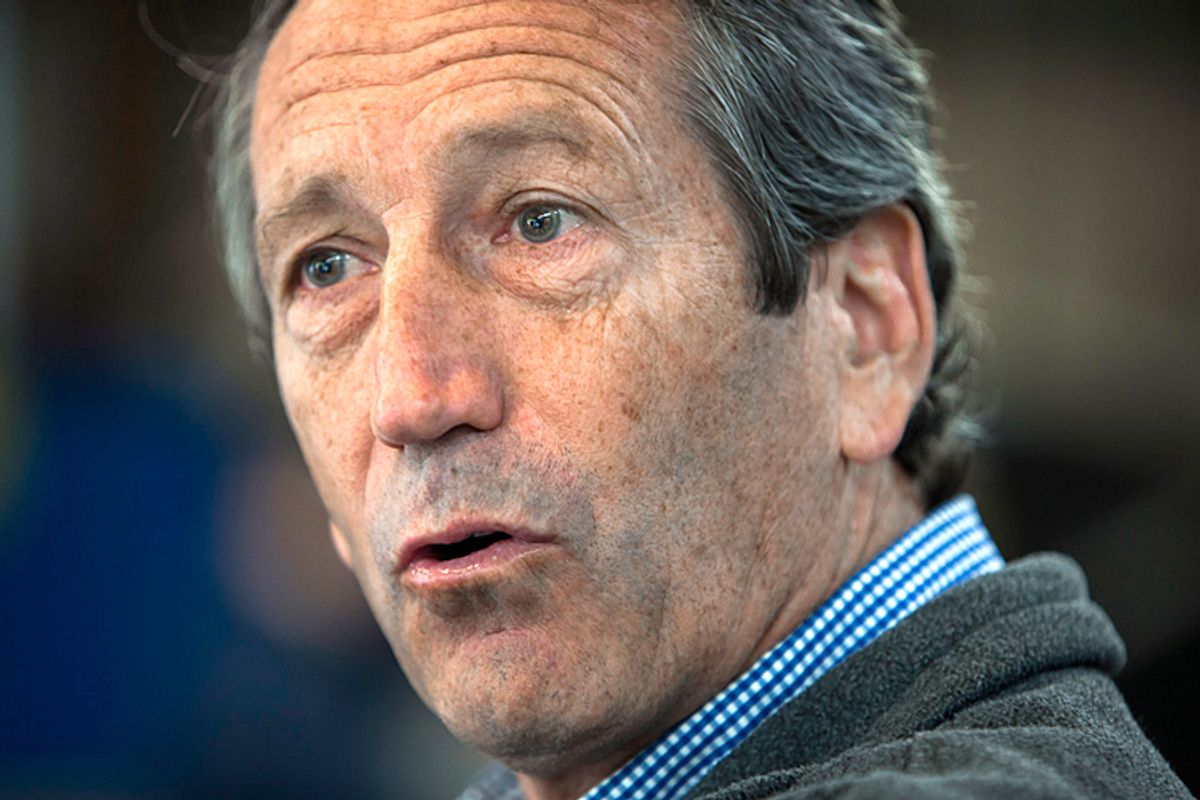 Not that my opinion matters much in South Carolina’s first congressional district, but Mark Sanford strikes me as rather loopy, and somewhat creepy. Yet he may well win his race against Elizabeth Colbert-Busch on Tuesday. Local conservatives apparently despise Nancy Pelosi and Barack Obama more than the Republicans who flagrantly violate so-called family values.

National Republicans nominally abandoned Sanford after it became public that he was being sued by his ex-wife Jenny for violating a no-trespassing order at her home – to watch the Super Bowl with his son, he claimed – on top of that small matter of violating his oath of office as governor when he disappeared for five days to be with his Argentine mistress (now his fiancée) back in 2009, on the taxpayer’s dime.

Sanford fell 9 points behind Colbert-Busch in a PPP poll after the trespassing revelation (more on that possibly flawed poll later), but he’s a point ahead in the latest PPP survey, and could very well win.

As most people remember, Sanford admitted his affair with an Argentine journalist after his staff explained his mysterious absence by saying he'd gone to "hike the Appalachian trail." When he came back he confessed his infidelity and claimed he'd met his "soul mate." Later he admitted he'd "crossed the line" of adultery with several other women, but never to the undefined extent he did with his mistress. Jenny Sanford divorced him, state legislators tried to remove or impeach him, but he finished his term. Two years later, he emerged from political retreat to run to replace Tea Party Rep. Tim Scott, who was appointed senator.

I have no problem with voters forgiving Sanford for adultery – they forgave President Clinton and a lot of other politicians, in both parties. We go to the polls to elect our leaders, not to choose our husbands or wives. Still, I find it hard to believe voters would look away from so much erratic behavior, toward his political responsibilities and especially toward women. Adultery, going AWOL from your job and violating court orders to trespass on your ex-wife aside, just in the last two days, Sanford has pulled two bizarre stunts involving women. He seems a little bit crazy.

First, he manically dragged a group of reporters into a series of shops “to try to find a woman who doesn’t like me” after a female reporter asked whether he might have problems with women voters. Then on Monday BuzzFeed’s Kate Nocera was supposed to drive Sanford to his next campaign event to get some personal time with the candidate, but he commandeered the keys to her rental car and insisted on driving himself. He later told her he was afraid that the female staffer who regularly drove him was going to kill him, she was such a terrible driver. (I’d note that when Yahoo’s Chris Moody got his drive-along time with Sanford, Sanford actually let him drive.)

BuzzFeed’s Andrew Kaczyinski had the fun task of finding the ickiest passages from Jenny Sanford’s book, and they were many: When they were still dating, Mark left Jenny a car at the airport when she came home to meet his family, and went off to a party without her. Before they got married, he suggested they delete the traditional wedding vow promising to be faithful, because he wasn't sure he could keep it. When they were expecting a child, he ditched Lamaze. Bad fiancé, terrible husband, crummy father-to-be. Do South Carolina voters really not care?

Maybe they care about other things more. Slate’s Dave Weigel, reporting from the scene, finds that conservatives are energized by Sanford’s candidacy for his old congressional seat, especially in the age of Obama. On Monday former Gov. James Edwards told voters if Republicans lose the House, President Obama would become “a dictator.” One of Sanford’s primary opponents, state Rep. Chip Limehouse, agreed. “It’s a battle for the soul of the country. If we lose the House, we’ll lose America.”

The Washington Post’s Chris Cillizza insists that if Democrats lose this House seat, they actually win, but I think he’s wrong. Cillizza’s point is that there are plenty of GOP incumbents in 2014 in districts Mitt Romney either lost or won narrowly; he took this one by 18 points, so even if Colbert-Busch wins, it’s a tough seat to defend. Yet a win is a win, providing a psychological lift and a political one. Incumbents have some actual clout, especially when it comes to fundraising, plus it’s always nice to claw an extra, unexpected victory whenever you can, especially in today’s uninspiring political climate.

Still, Colbert-Busch was always the underdog – maybe even when she was nominally ahead. If Sanford wins, he'll get credit for running a "creative" campaign using a cardboard Nancy Pelosi as a stand-in for Colbert-Busch and debating her on street corners. But the New Republic’s always smart Nate Cohn notes that the PPP poll that showed Colbert-Busch up by 9 drew from an unreliable model of the district’s electorate, in which African-American turnout was as high as it was in the 2012 presidential election. That’s unlikely in an off-year special election, though not impossible. Black voters could surprise the country as they did last November, and come out for the Democrat in higher numbers than expected. Barring that, the race is Sanford’s to lose.

And he’s done more than enough to lose it – but maybe not enough for South Carolina.