First Western painting of Native Americans discovered at the Vatican

It's a detail in the Borgia Apartment 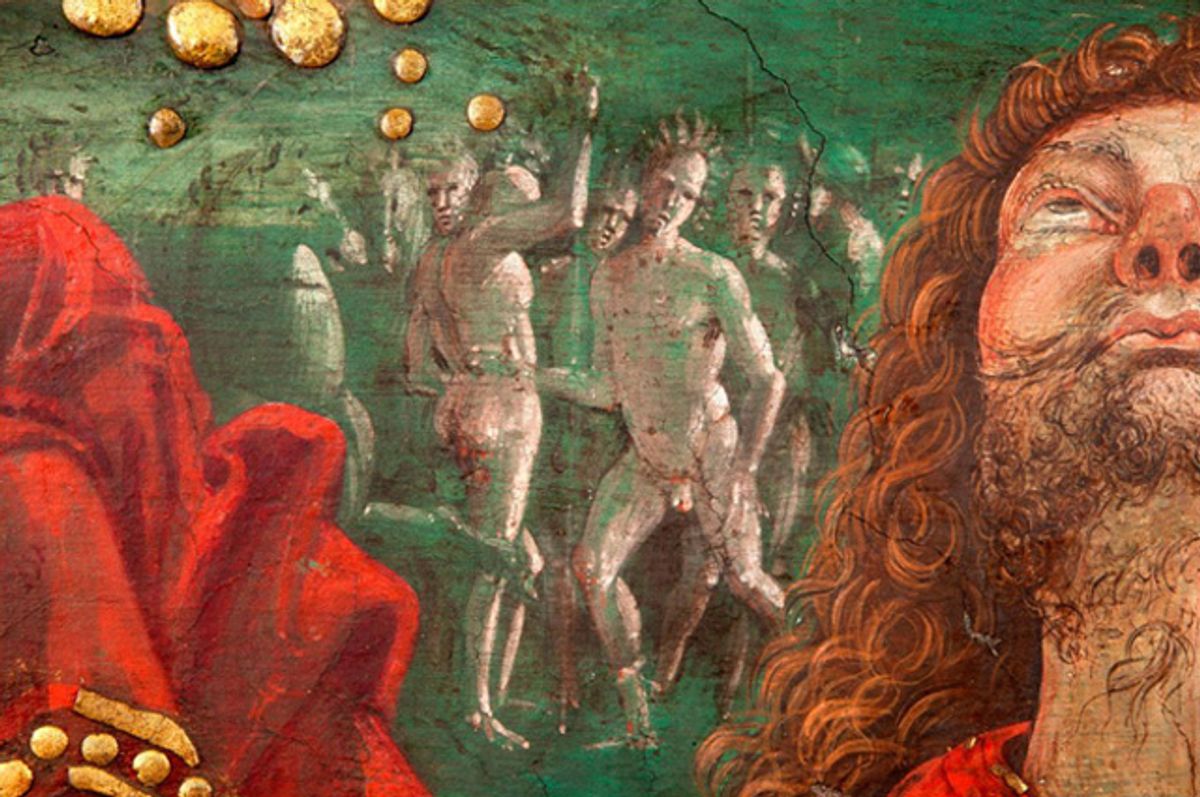 A detail of what some art historians believe to be the first European painting of Native Americans. (all images via The History Blog)
--

During the recent restoration of Pinturicchio‘s Resurrection fresco (1494) on the wall of the Hall of Mysteries in the Borgia Apartment at the Vatican has revealed what may be the first images of Native Americans in European art. Vatican Museums Director Antonio Paolucci believes a detail in the artwork refers to the natives of the American continent that explorer Christopher Columbus encountered when he travelled to the New World for the first time.

”Just behind the Resurrection, behind a soldier who is enthralled by the incredible event he is seeing, you are able to discern nude men wearing feathers who appear to be dancing,” Paolucci said.

An arrow on the original fresco by Pinturicchio at the Vatican demonstrates where the figures many believe were meant to portray Native Americans appeared in the wall painting.

The History Blog gives the images some context and offers a possible explanation for the imprecise representation considering the artist was working on the Papal apartment between 1492 and 1494, and Columbus had just traveled to the New World:

Since Pinturicchio painted Pope Alexander VI’s suite of rooms between 1492 and 1494, these could well be the artist’s vision of the friendly naked natives bedecked in parrots that Columbus described upon his return from the first voyage.

The Vatican newspaper L’Osservatore Romano has this explanation for the image:

Let us examine the dates. Cardinal Rodrigo Borgia became Pope under the name of Alexander VI in August 1492. A few months later, on October 12, Christopher Columbus set foot in the New World. The entire cycle of the papal pinturicchiesco was definitely concluded at the end of 1494 because on 1 January 1495 in these environments found lavish hospitality King Charles VIII of France, accompanied by his barons, his ministers, his priests. Pope Borgia was interested in the New World, as were the major registries in Europe. On June 7, 1494 in Tordesillas, Castile, was signed the Treaty of the name dividing the West Indies, the lands outside of Europe, in an exclusive duopoly between the Spanish and the Portuguese Empire. The New World was divided by Raya, a meridian line that compartiva areas of Spanish and Portuguese influence. The diary of the first voyage of Columbus to date from 1492 to 1493. And here is what he saw that Colombo Friday, October 12, 1492 when he set foot on American soil. “Soon we saw naked people at all (…), however good and even friendly, came to our boats to swimming, bringing us parrots and cotton thread in balls, and spears and many other things, in iscambio of other objects, such as small glass beads, rattles of that we gave them. “

But The History blog suggests another possibility:

I think he’s confusing Columbus’ journal, later edited by Bartolomé de las Casas but not published until 1825, with a letter Columbus wrote about the new islands in Southeast Asia he thought he’d discovered. It wasn’t a secret, though. It was an international sensation.

You can read an English translation of Columbus’ letter here. And the History blogger makes a good point:

Considering how the Pope spent a great deal of 1493 dealing with the ramifications of Columbus’ discovery, and how all these political issues were framed in terms of who should get to convert the newly-found pagans to Christianity, it makes sense that they would make a cameo in this fresco.

Why did it take so long for researchers to decipher this fresco detail? According to The Telegraph:

The mysterious figures remain unnoticed for so long because the Borgia Apartments were abandoned after the death of Alexander VI in 1503.

Subsequent Popes did not want to be associated with the notorious family of schemers and adulterers.

They were only reopened in 1889 by Leo XIII, and are now used to display a collection of religious art.